In Sion Sono’s Love Exposure (Ai no mukidashi, 2008), 17-year-old Yu (Takahiro Nishijima) struggles with his sexual awakening. Sono turns the basic “boy meets girl” plot into a narratively and aesthetically rich film in which Yu encounters violence and madness but also discovers love and responsibility. Sono’s four-hour film explores what it means to be young. Yu, on the threshold of adult life, experiences a time full of tensions that is all the more chaotic as his mother has died and his father Tetsu (Atsuro Watabe) has become a Catholic priest. Kaori (Makiko Watanabe), an eccentric woman who appears at mass one day, brings even more chaos, seducing Tetsu only to abandon him very quickly for another man. Filled with self-pity and suffering from injured pride, the priest-father asks his son to confess daily. Yu, who does not have much to confess, starts to commit very minor “sins”, such as crushing ants under his feet, because the confessional is the only place where he is close to his father. 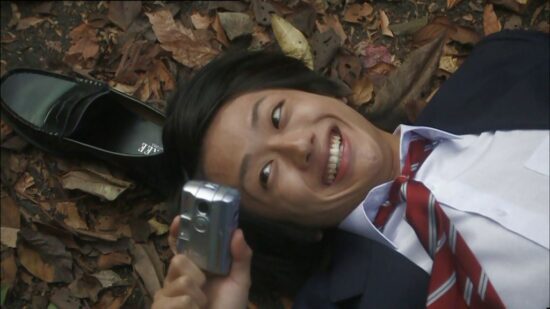 The situation is a variation of the Oedipus complex, with the idealization of the dead mother – clearly associated with the Virgin Mary – and the struggle for acceptance by the father. Sexuality is for Yu the key to attracting his attention. It is only when he confesses his new “sin” – taking stealth photographs up women’s skirts – that Tetsu stops acting like a priest listening emotionlessly to the confessions of a sinner and turns into an angry father, beating his son and throwing him out of the church. This violent reaction reveals his hypocrisy, as Tetsu has broken the vow of celibacy by living with Kaori, with whom he is still infatuated.

The sexual awakening of their offspring creates a feeling of uncertainty for many adults facing loss of control. In Love Exposure, the father-priest’s fears are also connected with his own hidden desires and guilty feelings. However, if Tetsu is depicted as a lost soul, more pitiable than mean, the two other biological fathers in the film (there are several surrogate fathers – “Father Tetsu” the priest, the leader of the Zero Church, and God as the most important father figure) are simply brutes, torturing and sexually abusing their daughters – Yoko (Hikari Mitsushima) and Koike (Sakuro Ando). The mothers are absent or dead; and the patchwork family created by Tetsu and Kaori that includes Tetsu’s son Yu and also Yoko, the daughter of one of Kaori’s former boyfriends, splits up. The dysfunctional family in this film is a symbol of a society in crisis that faces  growing social isolation. Traditionally a key element in Japanese history and culture, the family is here replaced by youth gangs and new religions. The cult Zero Church becomes the new home for the disoriented Tetsu, Kaori and Yoko, all lured into joining this dubious sect by the ruthless Koike. 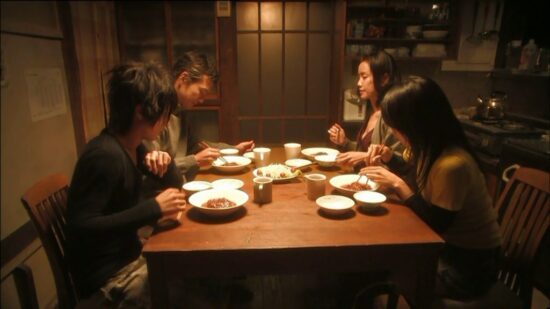 More by accident than by design, Yu meets three other adolescents –members of a gang – who become his close friends and disciples, intrigued by the behaviour of their “boss” and full of admiration for his phenomenal skill at taking upskirt photographs. Yu’s intention in joining the gang and taking the photographs is to impress his priest-father, and it also represents for him a way of becoming a man or, rather, acquiring what he and his friends think manliness involves. However, even if Yu’s greatest wish is to have an erection, he keeps the promise he gave to his dying mother and saves his first kiss for his “Maria”, another reference to the Oedipus complex and Yu’s strong association of his mother with the Virgin Mary. This is visually supported in several flashbacks showing Yu and his mother in front of a statue of the Virgin, and in one early shot Yu is clearly unable to distinguish between the two women – the real one and the biblical one – when the statue’s face turns into that of Yu’s mother. 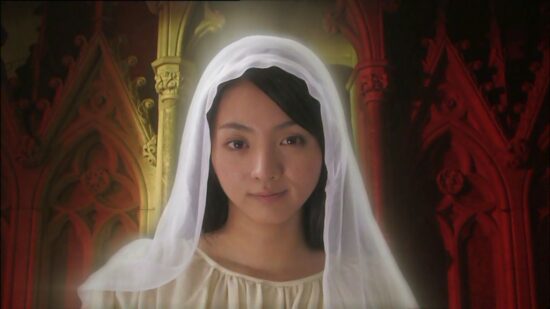 One key sequence in the film is the “miracle” towards which the first part develops. A series of inserts indicate “still X days/minutes until the “miracle”. The “miracle” is the moment at which Yu meets Yoko – his “Maria” – for the first time, helping her to fight off a group of hooligans. A miracle is created by means of cinematic devices – before facing the menacing group, Yoko kneels down and one of the hooligans throws a veil over her head. Now it is she who is associated with the Virgin Mary, a comparison that recurs in numerous shots in which Yu, dreaming of Yoko, sees her dressed like the Virgin and in his father’s chapel. Then follows a first kiss and a first erection, after 60 minutes. It will take three more hours, many incredible adventures and numerous erections before Yu is able to kiss his beloved again.

Two of the five sections of different length into which the film is divided are narrated, the first by Yoko and the second by Koike. These two female characters refuse to accept the role of victim, having learned to defend themselves, as shown in several fight sequences reminiscent of swordfighting and ninja films. Yoko is depicted as a teenager who mistrusts adults but accepts family life with Kaori and later with Yu and his father. Koike is the incarnation of pure malice, who after castrating her father for abusing her, began recruiting for the Zero Church. In order to turn Yu’s father, Kaori and Yoko into zealous members of the sect, the ruthless and cunning Koike seduces Yoko wearing the disguise that Yu wore when he rescued Yoko from the hooligans. 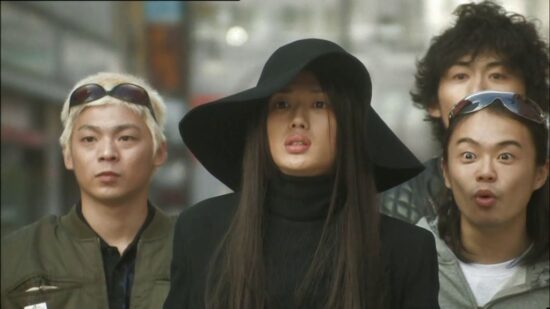 Having lost a bet, Yu had agreed to dress up as Sasori and steal a kiss from the first girl he met. Like the famous (bisexual) heroine in Toru Shinohara’s manga and a series of films of the 1970s, Yu wears a black hat and coat and dark sunglasses and is armed with a katana, the long sword of the samurai. This gender-crossing masquerade is a further hint to the sexual  confusion typical of puberty. Takahiro Nishijima’s performance captures both the character’s malaise, well expressed by his stiff body, and his juvenile nonchalance. He plays his role as a “pervert” with great enthusiasm, asking his new friends (the members of his gang) with a big smile to “commit plenty of sins”. However, while his three fervent disciples remain immature adolescents, Yu discovers love and a new purpose in life.

The depiction of both Yu’s and Yoko’s coming-of-age process is embedded in a wider social context that gives insights into Japanese youth culture and the sexual behaviour of young people, where personal relationships are becoming increasingly replaced by fetishism and the virtual world. The film also makes reference to the broad spectrum of pornography in Japanese society, which expanded into a variety of media, including cinema, manga and video games.

In addition, Love Exposure points to the dangers of religious sectarianism and narrow-mindedness. The Zero Church, with its brainwashing methods and other means of oppression – most clearly shown in a series of shots at the sect’s headquarters where people are kept in cells – brings memories of the Aum sect (Oumu Shinrikyo). The terror of the Aum sect, whose deadly attack in the Tokyo subway in 1995 remains a traumatic event in recent Japanese history, is hinted at in the film’s portrayal of a society in which violence is concealed behind a façade of respectability. Sono also shows a world of voyeurism and control – Yu, who observes his father carefully and watches Yoko secretly while she is in her bedroom; Koike, who has installed microphones and cameras in the priest’s home, spying on its inhabitants.

These are only a few of the film’s many themes and motifs. Sono multiplies intertextual references to the history of the cinema and culture, to Japanese and Western cinema and to Japanese manga. Zen Buddhism coexists with Catholicism, the statue of the famous dog Hachiko at Shibuya Station in Tokyo can be seen in the background in one shot; and vampire films are the inspiration for two dream sequences. On the soundtrack, Ravel’s “Bolero” and Beethoven’s Seventh Symphony meet pop music and heavy metal. The fragmented narrative has its counterpart in the mise-en-scène and editing – abandoned ellipses, flashbacks, repetitions and constant changes of pace. Love Exposure is a gigantic mixture of images and sounds in which contemplative moments are challenged by splatter-like violence and in which madness is juxtaposed with redemption and stillness with frenzied movements.

The multifaceted approach of Love Exposure reflects the chaos of feelings that adolescents experience, and despite its seeming disjointedness, the film follows a clear structure, just as Yu resolutely pursues his goals. Absurd and exaggerated as the story might appear, it nevertheless preserves the freshness of youth and youth’s innocence, and by restoring balance and harmony, ends with an image of hope. Sono’s film follows the humanist tradition in Japanese cinema as represented by Sadao Yamanaka, Akira Kurosawa and many other filmmakers, and it does so in a modern way with a heterogeneity that is appropriate to the 21st century.