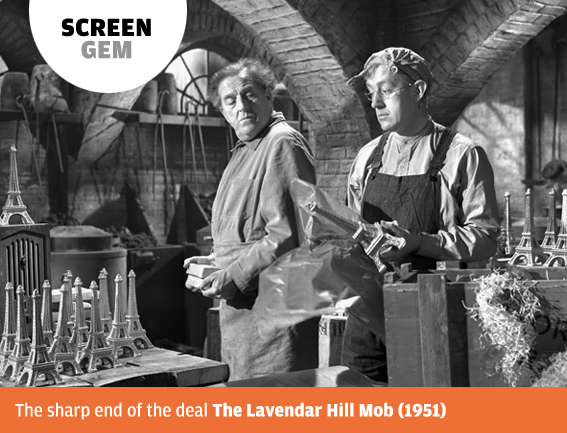 As The Lavender Hill Mob – one of the most glorious gems in the Ealing crown – enjoys a 60th anniversary re-release, Scott Jordan Harris takes a look at the odd little object at the center of this hilarious heist spoof – the gold Eiffel Towers.

When a calculating bank clerk and an opportunistic artist (Alec Guinness and Stanley Holloway) pull off Britain’s biggest bullion robbery, there is only one sensible way to fence the loot: melt it down, mould it into miniature models of The Eiffel Tower and ship it to Paris. The resultant statuettes, worth £50,000 apiece, are naturally not intended to be sold to the public – and so when six are accidentally given to a group of girls on a school trip, regaining them becomes the main characters’ main aim.

Five are recovered with relative ease, but the sixth – now owned by an especially resolute young lady who is immune even to an offer of ten shillings – is taken to a police convention and presented to an officer as a gift. The two least likely, and most English, members of the international criminal fraternity are forced to snatch it – and all kinds of chaos ensues.

The little Eiffel Towers – and particularly the one most important to the plot – resonate with audiences for several reasons. Visually, they are striking and memorable. Conceptually, they are such absurd objects they could only exist onscreen. (Or at least they could have in 1951. Nowadays, they might well be featured in some gauche and gratuitous modern art exhibition.) Furthermore, they could only really exist in this film. ‘Dirty’ Harry’s .44 Magnum and Hannibal Lecter’s half-mask are evocative in any context, and impact even upon those who have not seen the films in which they feature. The Lavender Hill Mob‘s gold Eiffel Towers, however, only make sense to those who have seen it.

As such, they unite all who remember the film, and films of its kind, with affection. Small, neat, silly and deceptively precious, they embody the appeal of one of the great Ealing comedies, and represent to us what all the great Ealing comedies now are: solid gold souvenirs from an era to which British cinema, and British society, will never return.