Artistic cinematography and a devoted biographical approach characterize Barry Jenkins’ Moonlight (2016). With plot-driven tri-part divisions, Moonlight poetically chronicles the growth and maturity of identity searching as a boy matures into a man. It is a memorable film with few words, a collage of characters scarred by social misfortunes, and a message of hope that is bound to carry on in the years to come.

The film starts first with the dysfunctional social reality of Chiron (played by Alex R. Hibbert), chased by bullies in the desolate landscape of a drug-infested neighborhood. Titled “Little”, this chapter of the movie sets the undertone for Chiron’s later fears and ambitions. Being so small and young, Chiron is immediately taken under the wings of Juan (played by Mahershala Ali), who is both a father-figure and the drug dealer to Chiron’s single parent home. 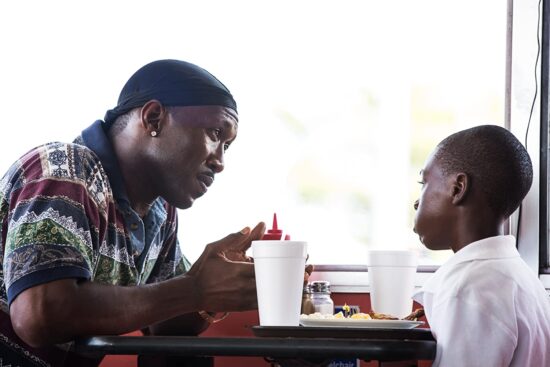 The frustration of being singled out and picked on deepens in “Chiron”, the second chapter. As a teenager, Chiron experiences the poison of his social environment. Whether it is the distant social worker, the addict mother, or the unavoidable bully, Chiron’s support networks all break away as he grapples with his sexuality.

In the third chapter, “Black”, Chiron is presented as a product of society and all its past misjudgments. Every flashback is accompanied by vivid colors and haunting, broken anguish. Even though all his dots are connected, the silences and blue hues exude a universal melancholy to the last scene.

Moonlight is a movie with an unspoken rhythm, a flow from classical, serene music to upbeat, subdued R&B. But it is also a human-centric piece that tones down mass incarceration, drug addiction, and social ailments to play up the existential journey of a gay black man. Even in the cadences of idioms and phrases and intentional silences, a message of carrying on prevails. 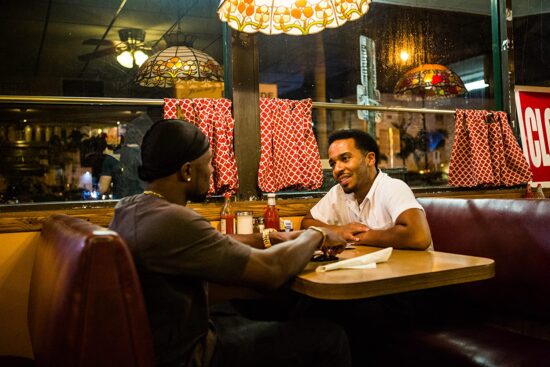 Moonlight is a film that does not tell but show the story. Under the transformative power of its humanist message, the journey of Chiron reveals the strength of self in even the most desolate conditions.