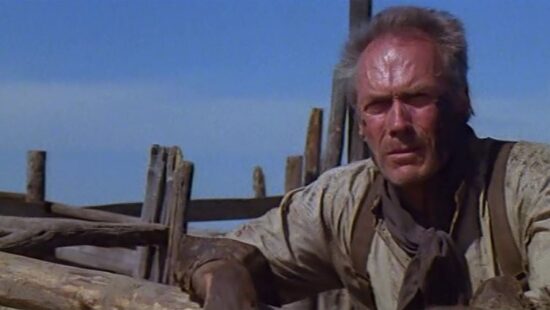 Clint Eastwood’s Unforgiven (1992), set in 1881, is a complex film about violence in American history and, by extension, in present-day America. It also presents multifaceted reflections on human nature and the construction of legends. William Munny (Eastwood), a former gunfighter and notorious killer, is now a pig farmer in Kansas. In the opening credits he is seen as a tiny figure digging a hole under a tree in the background of a landscape shot. Medium shots of the tree later in the film reveal that he is digging a grave for his wife Claudia, who has died of smallpox. Claudia is an absence-presence in the film and is mentioned by Munny several times as the woman who cured him from “drinking and wickedness”.

Munny returns to his old way of life when the young “Schofield Kid” (Jaimz Woolvett) approaches him looking for a partner. The prostitutes in Big Whiskey, Wyoming, are offering a reward of $1,000 for the killing of two cowboys who have disfigured one of their number. Munny agrees only reluctantly and, as he claims, for the sake of his children. Given the poor state of his farm – he and his two young children live in a shed and some of his pigs are sickly – it is clear that he needs the money desperately. The shots of Munny in the mud of the pig pen, trying unsuccessfully to catch one of the animals, is visual evidence of his failure as a farmer.

The Schofield Kid, a would-be gunfighter, peppers Munny with questions about his violent past, which his uncle, an old friend of Munny, has told him. The stories are undoubtedly exaggerated accounts, but neither Munny nor his friend and former partner Ned Logan (Morgan Freeman), who has joined the two on their journey to Wyoming, succeed in their attempts to change the Kid’s idolatrous attitude and convince him of the hideousness of a life ruled by violence and drunkenness. Munny’s incessant claim that he is no longer a killer sounds like a mantra that he repeats so that he believes it himself. However, he tries in vain to escape from his violent past and leave it behind him. 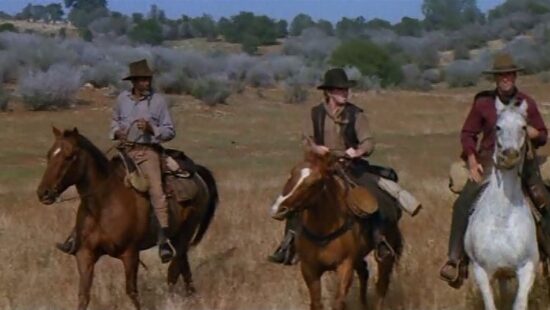 In Big Whiskey, he becomes the victim of the sadistic sheriff “Little Bill” Daggett (Gene Hackman), who savagely beats him up and kicks him. The killing of the first cowboy is shown in all its brutality. Logan finds himself no longer able to kill, the Kid is almost hysterical and all he can do is give a commentary on the situation, and Munny does not succeed in killing straightaway. One of his bullets hits the cowboy in the stomach, leaving him to die a slow death. The next morning, the “Schofield Kid” kills the other cowboy while the latter is sitting on the toilet – an almost ironical reference to the dirty work of the killers. It is only after the discovery of what has happened to Logan – he has been beaten to death by the sheriff – that Munny lives up to the Kid’s image of him as a ruthless killer.

Now unable to escape from this image, Munny returns to Big Whiskey to take revenge for the brutal murder of his friend, and he kills the sheriff and four of his deputies in cold blood. He has turned into an avenging angel and immediately finds a new admirer in the writer Beauchamp (Saul Rubinek) – a further example of image-making, which is a concept that is at the core of Unforgiven. Beauchamp has arrived in Big Whiskey as the biographer of the gunfighter “English Bob” (Richard Harris), an arrogant Englishman who ridicules (American) democracy and celebrates (British) monarchy. “Little Bill” is an old acquaintance of this Englishman, and he reveals the truth behind Bob’s supposed exploits, which Beauchamp then describes in pulp fiction tales.

“Little Bill” not only de-glamourizes “English Bob”, but also brutally beats him up before chasing him out of town. Beauchamp, who becomes the sheriff’s biographer, is an opportunist and a coward and a mere theoretician. His analysis of the fight in the saloon irritates Munny, a man of action and experience with no interest in a writer eager to perpetuate an image he is trying to escape from, even if unsuccessfully. The French name Beauchamp translates as “beautiful field”. Is there a slight critical sideswipe here at those – often French – film critics who venerate Eastwood’s oeuvre and, in doing so, transform this actor-director into an icon and create a fixed image of him and his work? 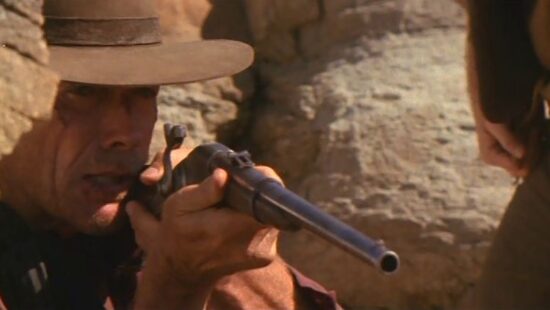 Unforgiven is a film about perception. Munny tries to escape from his past and has a new image of himself, which is, however, challenged by the stories that people tell about him in the American West. The “Schofield Kid”, boasting that he has already killed five men, is myopic and shoots the second cowboy – the first man he has ever killed – at close range, almost face to face with the cowboy. The Kid is trying to escape too – from the boring life in the West and from poverty. After his first killing, he is disgusted by violence and decides he will never kill again. Disillusioned, he says to Munny: “I ain’t like you, Will.” Munny is confronted with his legend just as Eastwood was for a long time with his image and screen persona created in Western and police films. Munny, watching the Kid ride away into the wide-open spaces of the prairie, is shown behind the fence of the pig pen as if in confinement. The contrast between shots of the protagonist and the landscape suggest that, despite his claims to the contrary, Munny may perhaps regret giving up his former life and dream of escaping from the life of poverty on his farm.

Unlike Munny, Eastwood turned his public image into a creative tool which he has continued to explore throughout his long career as actor, director and producer. His screen persona, basically inspired by his roles as a strong hero in the Far West, was adapted to contemporary America in police films such as Don Siegel’s Dirty Harry (1971). This film’s protagonist, Harry Callahan, a police inspector operating in San Francisco, is an ambiguous figure, pursuing law and order relentlessly and with a dark, obsessive side to his character. Munny is presented as a darker, more radical version of the kind of lone hero Eastwood played in the early years of his career.

Both Callahan and Munny have a clear penchant for killing, but unlike Callahan, Munny kills not only wrongdoers but also innocent women and children. Callahan tracks down criminals in five films from 1971 to 1988 and is a deadly marksman, but Munny is depicted not only as a reformed gunfighter but also as an aging man lacking shooting practice who misses the young cowboy several times and has difficulty mounting his horse, a handicap that is turned into a running gag. Munny is an alienated hero who has become estranged from himself – revealed in a number of close-ups of his face that show him deep in thought. These shots show him not only as an aging hero but also as a vulnerable man tormented by self-doubt and fear. The exquisite use of light and shade in the photography create the perfect visual match for this worn-out hero.

Eastwood lived up to his image, playing the strong hero figure in numerous films, but he always explored and challenged his roles, as he does in Unforgiven. Munny kills those who are more evil than he is, and therefore the viewer is allowed to approve of the violence he resorts to at the end of the film. However, Unforgiven also reveals the hero’s dark side and the horror of violence, and in doing so establishes a very close link to an aspect of American culture. Munny, leaving Big Whiskey on a rainy night, is framed in front of the Star-Spangled Banner, inviting an analogy and suggesting that like Munny, the United States is unable to escape violence (as recent events have once again shown). 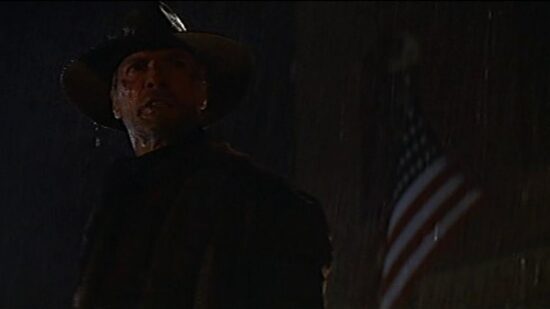 Unforgiven is a journey into the dark heart of America. Munny vanishes in the darkness of the night, never to be seen again. In the final shot, the film comes full circle, showing him as a tiny figure in the background next to his wife’s grave, and a caption states that he and his children have left without a trace and rumour has it that he went to San Francisco and “prospered in dry goods”. Can the “American Frontier” still be interpreted as a symbol of escape? Unforgiven offers a critical examination of the idea of “regeneration through violence” in American history but suggests – almost ironically – that there could be a “second chance” in the lives of Americans. Eastwood’s Western offers escapist moments for those viewers who enjoy violent action but at the same time reveals the ugly face of violence, debunking the American Dream as an illusion and presenting the Western hero as no more than a killer.