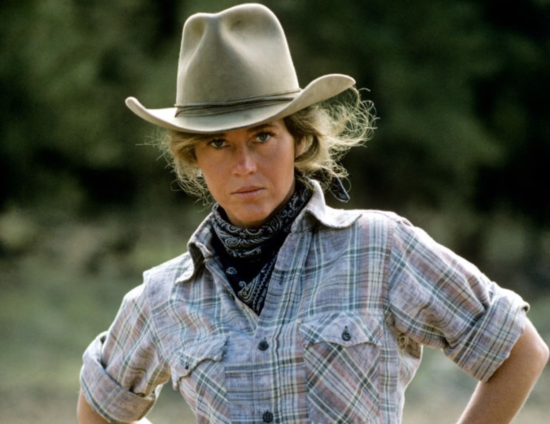 The great frontier always drew dreamers. I am not an American, but I am a dreamer. And I’ve always considered the Western as one of the greatest adventure movies. Capturing the adventurous spirit, the making it on your own, and an ethic and style that are eternal. That’s what a cowboy embodies. Someone with a very well defined character and with his own story, but one that doesn’t dwell on the past, because his kind of work and life only allows him to live in the now. It’s in his nature.

“His authority comes from meeting things head on,” photographer Laura Wilson writes in her book Watt Matthews of Lambshead. “His beliefs are clear. His moral compass is true.” The book chronicles the life and work of Watt Matthews, one of the great last Texas cattlemen and one of the most important figures of the Texas frontier culture – except for four years at Princeton, Watt spent his entire life on the ranch, which had remained its own separate world into the late twentieth century. Wilson continues, writing about Matthews’ cowboy hat: It “is soft so the brim will give if he hits brush; the crown is not high. On a new hat, he has the brim cut down to two and three-eighths inches so it’s perfectly proportioned to him. Then, before he wears a hat for the first time, he holds it over a steaming kettle in the cookshack, pinching and bending the felt to shape the hat into a style that’s all his own.”

The things cowboys wear are very individual. They are part of their lifestyle. They have an earthiness, a realness about them, a classic integrity to them. The loyalty to the land, to their beliefs, to a certain way of life also translates into the loyalty to their way of dressing. There is a commitment about their look that is so cool. Everything is about personal style. A consistency in the way people work and dress that society today considerably lacks. The patch-pocket Western shirts, the jeans, the worn-in leather jackets, the fringed suede coats, the shearling trucker jackets, the big buckle belts and wide-brim hats, they have always been part of a cowboy’s life.

I wish the American West was still a reality, that it could still capture our imagination the way a Western movie does. In the forward to Laura Wilson’s book, historian David McCullough wrote that Matthews “created a family kingdom so large and still so true to its traditional way of life that visitors sometimes have to remind themselves that it is all real.” The cowboy image is kind of a vanishing image, but it does not stop being attractive to the outside world. Especially that so many of the clothing items mentioned a little earlier have always found a place in the modern man’s wardrobe.

And when those elements slipped into the women’s wardrobe, a pioneer look was born. Only this time, it was a pioneer look for women. It was so much part of the American psyche that it had every reason to be universal. Jane Fonda in Comes a Horseman (Alan J. Pakula’s 1978 film in which she co-stars with James Caan) is the personification of that Americana look – she’s also tough and independent and self-sufficient, naturally belonging in a man’s made world. She is claiming it by the way she acts and dresses and no man questions it.

I think that maybe the transition of the Western clothes into a modern woman’s wardrobe is even more seamless than in the case of men. Somehow women can effortlessly make use of any of the signature cowboy items on a daily basis – like the cowboy boots, or the plaid shirt, the massive buckle belt, and even the wide-brimmed hat. It is Ralph Lauren whom we have to thank for his contribution to making this look an instant fashion classic that lives on better on women. He’s always been drawn to the West (as he has been to the world of film) and he’s made his own version of it. A little romanticised? Maybe. But it’s never lost its appeal. Like the American Dream, he made it appear available to all.

“You were sure right about this place, Frank. I’ve never seen such a great space,” says one of the characters in Comes a Horseman to James Caan’s Frank, looking at the great outdoors stretching before his eyes, far into the distance where the mountain peaks merge with the sky, capturing once again every man’s fascination with the West.

I would like to say a few words about Carys Davies’ debut short novel, West – about an American settler and widowed father of a young girl who leaves his Pennsylvania farm and goes into the uncharted wilderness beyond the Mississippi River. It’s one of those books that captures your imagination and adventurous spirit. It’s about life, death, greed, adventure, dreams, belief, beautifully and proportionally intertwined. The image of the West is once again brought to life and it is as gripping as it has always been.