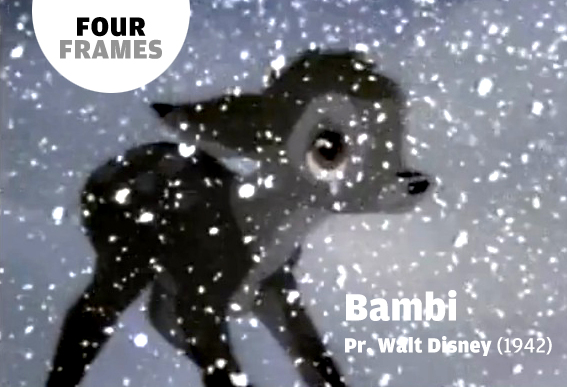 For all Disney’s early innovations in the field of animated movement of characters and environments, from the use of rotoscoping to the multiplane camera technique, it is this moment of relative stillness from Bambi that is perhaps his most affecting piece of work. It’s easy to be cynical about Disney, but this truly breaks the heart and has been teaching young children about death since 1942.

It is winter, and in the midst of the doe and fawn’s foraging the presence of Man is introduced. As the deer flee across a snowy field shots ring out. We stay with Bambi as he runs through the forest, finally stopping to catch his breath. He notices that his mother is nowhere to be seen and wanders desperately back through the forest calling for her. Bambi is startled by the sudden appearance of his father, the Great Prince, who informs him that his mother cannot be with him anymore. Bambi casts his head to the ground, and when he lifts it again, the audience sees that he is crying.

The moment before Bambi’s sad realisation is held for several seconds, with only the steadily falling snow providing onscreen movement. Even watched in isolation the scene can bring a lump to the throat. Those extended seconds are the shared cine-memory guaranteed to reduce generations of grownups to emotional rubble. It’s said that the death of Bambi’s mother provided Paul McCartney with the initial spur to take up his interest in animal rights. Not surprisingly the pro-hunting lobby has always had it in for Bambi. They regard it as ‘nature-fakery…a fantastically misleading distortion of scientific facts about the behaviours of wild beasts’ and believe that ‘children who see it are thereby gulled into foolish sentimentalism about wildlife and an unjustifiable hatred of hunters.’ Most of us will simply stand in the snow and weep.