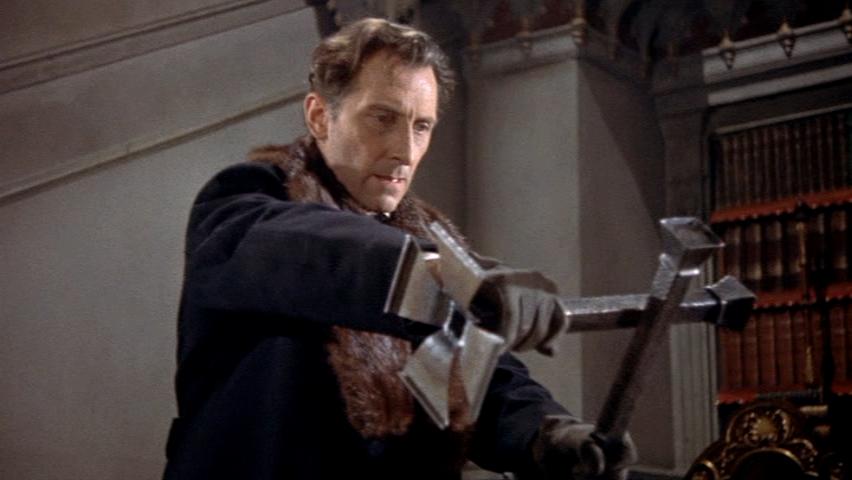 Hammer Films’ second foray into the world of gothic horror, Dracula, changed the fortunes of both the studio and the film’s two stars forever, making each in their own way indelibly linked with the sinister Count and his tenacious nemesis.

Until the late 1950’s Hammer had remained a low key studio producing small budget potboilers – successful but hardly ground-breaking. It wasn’t until The Curse of Frankenstein (1957) that they really found their feet (and notoriety) by bringing horror to the big screen in gorily vivid Technicolor. This film, along with their first journey to Transylvania a year later in Dracula, made international stars of Christopher Lee and Peter Cushing, and transformed Hammer into one of the most successful film studios in cinema history.

This was not the first time Lee and Cushing had appeared in the same film. A decade earlier these noblemen of horror had both featured in Laurence Olivier’s Hamlet (1948).  However it wasn’t until Hammer brought them together that the sparring partnership with which they were to become forever identified was born. Hammer had a distinctly ‘waste-not-want-not’ approach to filmmaking. Watching their films now the eagle-eyed viewer will recognise countless reused sets and locations, as well as actors, actresses and production staff who worked with the company on a regular basis.

This pared back attitude, initially born as much from necessity as from any aesthetic value, soon became an intrinsic element in creating the unmistakable air and atmosphere of Hammer. This was clearly visible in what is still widely considered to be the zenith of the studio’s contribution to the art of filmmaking, the well-nigh faultless Dracula. Production designer Bernard Robinson’s hauntingly minimal sets, Jack Asher’s rich cinematography and composer James Bernard’s discordant score, combined beautifully under Terrence Fisher’s direction to create a startlingly authentic piece of Eastern Europe deep with London’s Home Counties.

It was the studio’s predilection though for ingenious methods to despatch Dracula and his numerous followers, which never ceased to surprise by their resourcefulness; from the flaming sails of a burning windmill at the climax of The Brides of Dracula (1960) – the studio’s beautifully atmospheric follow-up to Dracula – to the Count’s impalement on the spokes of a broken carriage wheel during the dramatic pre-opening credits of Dracula A.D. 1972 (1972).  The best though was without doubt the haemoglobin drinking Count’s demise during the closing scenes of Dracula.  The madness in the face of Cushing’s Van Helsing as he searches for a means to despatch Dracula and his palpable relief as his focus falls on the candlesticks, is mirrored in the Count’s own desperation to escape not only his pursuer but also the encroaching dawn.  His eventual demise in the shadow of the Holy Cross is nothing short of poetic justice bringing to an end his reign of terror – at least until box office success resurrected him in Dracula: Prince of Darkness (1966).

A fully restored, High Definition edition of Dracula, was released on Blu-ray and DVD 3-disc Double Play in March, 2013. A host of extras included lost footage, documentaries and a Stills Gallery of over 100 fully-restored, rare images.