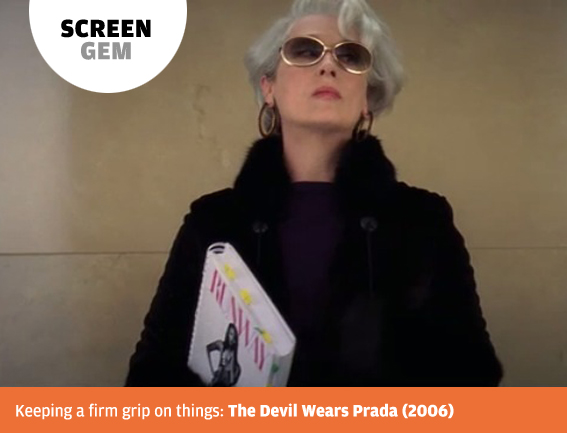 If RUNWAY magazine’s hallowed halls were the temple of fashion and Miranda Priestly, the publication’s infamous editor-in-chief, its High Priestess, then ‘The Book’ was the Holy Grail. The massive spiral bound scrapbook (a mock-up of the forthcoming month’s issue) is first seen tucked beneath Priestley’s arm as she emerges from her limo to stride, Prada handbag buffeting gently against her hip, across Elias Clarke’s foyer on her way to instil fear and dread into her quivering staff.

From Andy’s first official day at RUNWAY ‘The Book’ marks her career trajectory, defining her advancement on the slippery ladder from bumbling novice to fully fledged fashionista.  Even more than the finished magazine itself, which will be available to all who can afford the cover price irrespective of their fashion nous or social standing, the mock-up of the forthcoming edition is what fashion’s inner circle really want to see.  Handled only by an elite few (as seen when Emily admonishes Andy with a curt ‘don’t touch’ after she attempts to turn the pages of ‘The Book’ when it is first laid on her desk), the right to deliver it to Miranda’s Manhattan townhouse after the day’s work has been added is the final indication that Andy has been ‘accepted’ into Miranda’s trust.

Despite protestations to the contrary the novel by Lauren Weisberger, which inspired the film and spent six months on the New York Times bestseller list when released in 2003, was a clear swipe at legendary Vogue editor Anna Wintour for whom Weisberger had been an assistant.  The similarities between Wintour and Priestley – from the layout of her office to her demand for a costly reshoot of a fashion story which doesn’t meet with her approval – were emphasised with the release of 2009’s fly-on-the-wall documentary The September Issue, which followed Wintour and her team as they produced the biggest issue in the Vogue’s history.  Even here the ubiquitous ‘Book’ made a cameo appearance with Wintour seen carrying it into a board meeting during the film’s climax.

If Wintour thought that the worst was over with the release of The Devil Wears Prada, she may have to think again.  Weisberger has announced she is working on a sequel novel for release in 2013 – a film adaptation of which is inevitable.  The fashion world and chick-flick fans are already salivating over the prospective new standoff between Andy and her old boss from hell.