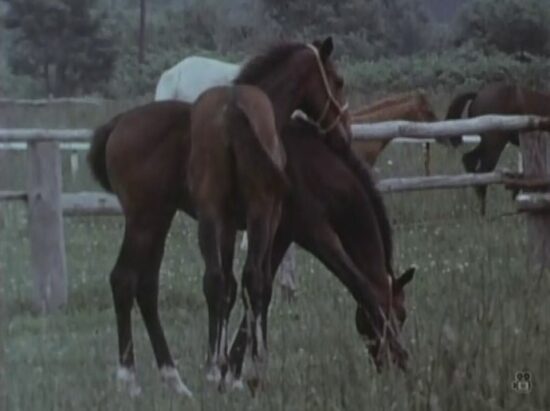 In his autobiography, Something Like an Autobiography, Akira Kurosawa mentions that since his youth he had loved horses and had spent whole afternoons at the hippodrome in Meguro. One of his screenplays written in the early 1940s was called Jajauma monogatari (The Story of a Bad Horse). This project was never realized, but Uma no uta (Song of the Horse) was shot during a time of stagnation in Kurosawa’s career when he had not made any films since the release of Red Beard (Akahige) in 1965. Uma no uta is Kurosawa’s only documentary film planned together with Ryo Kinoshita and co-produced by his own company Kurosawa Productions and Nippon TV. The film was first shown in 1970 or 1971 – the year is difficult to specify due to confusion about the date of the film’s  release.

Uma no uta is divided into two main parts, the first dealing with the birth and breeding of a racehorse and the second with horse races in Japan. The focus is on Shinzan, a thoroughbred stallion that has won the five most important races in Japan. These two parts are preceded by a prologue that puts the story of horses in a broader cultural context, giving insights into the centuries-long relationship between men and horses, from prehistoric representations of the animals to drawings by present-day children. A number of longer sequences reveal the role of the horse in Japanese religious customs and folklore. The documentary’s two narrators, Noboru Mitani and Hiroyuki Kawase, are the actors cast as the beggar and his young son in Kurosawa’s Dodes’ka-den (Dodesukaden, 1970). Instead of simply giving a commentary, the voice-over narration is a dialogue between a fictional pair assuming the roles of father and son. The father explains to his son what is shown in the film and answers the boy’s questions. Their lively dialogue stands in contrast to the more usual didactic tendency of a voice-over, and this aspect is reinforced by the way the little boy identifies with the horses. “Jump, jump, jump!” he shouts to encourage the young colt. In a sequence in which bad weather prevents the horses from leaving their stable, he comments on their feelings when he says: “It must be boring.” And indeed, their faces at this point suggest a bored yawn. The boy calls the hay “a soft bed for the horses” and wonders what horses might dream about. 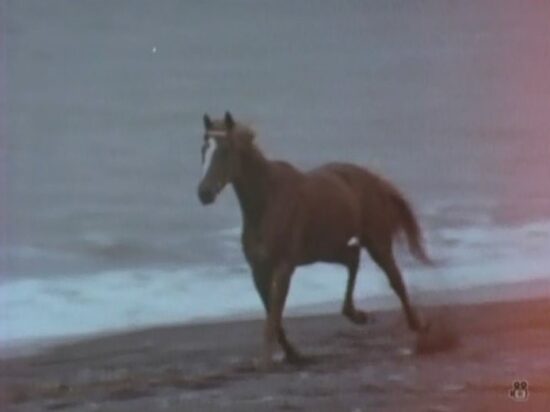 The horses are integral protagonists in the film and are personified by the dialogue, which establishes strong connections between their behaviour and human reactions. The young horse is described as “childish” when it frolics in the fields, and later, when it is being trained to become a racehorse, its behaviour is compared to that of middle-school students who still lack discipline. These imaginative comparisons help the young child to understand the animal’s development to maturity as a racehorse.. In Madadayo, his last film and released in 1993, Kurosawa makes use of a similar personification of an animal when the protagonist eats horse meat and interprets as reproachful the look given by a horse that passes by. But it is in Dersu Uzala (1975), in which Dersu addresses both human beings and animals as “people”, that Kurosawa expresses most clearly his deep respect for all living creatures.

Long stretches in the film that show the horses grazing or running freely in natural settings – fields, woods, a beach – without commentary but accompanied by music evoke a pastoral feeling, transforming the animals into symbols of freedom, and the two commentators envy them their freedom. “I would like to be a horse”, exclaims the boy. A similar wish is expressed in the earlier film Red Beard, in which the young thief Choji (Yoshitaka Zushi), suffering from continuous hunger, explains that he would like to be a horse because they always have grass to eat. In both films the horse is a something that the child identifies with and even envies.

The elaborate mise-en-scène and editing create moments filled with poetry that convey Kurosawa’s love of horses. Uma no uta gives many insights into horse breeding and horse racing, but it is also a visual poem with beautiful images of the animals and of nature – spectacular cloud formations against a blue sky, the ocean, or rays of sunlight filtered through forest foliage, this last image reminiscent of shots in Kurosawa’s masterpiece Rashomon (1950). Stylistically, the film is a reference to Kurosawa’s fiction films with its subtle light-and-shade aesthetics and its insistence on movement. It must not be forgotten either that before this documentary film and Dodes’ka-den, released in 1970, Kurosawa had never directed a film in colour. Just as in many of his fiction films, there are also references to climatic changes. The rain, rays of sunlight, and mist are central motifs in a number of shots, all contributing to the film’s poetic rhythm. The association through alternate editing of galloping horses with flowing manes filmed in slow motion and the roaring waves of the ocean creates an experimental dimension in which nature and movement are celebrated. The very eclectic score by Masaru Sato, inspired by various sources – for example melodies reminiscent of Spanish guitar music – and using guitar, saxophone, drum and other instruments in combination with electronic devices reinforces the feeling of adventure marvellously and contributes to the film’s experimental tendency.

However, the idyllic images also serve as a reminder of how much mankind has destroyed the natural environment. A number of Kurosawa’s films since 1948 criticize the consumer society, and Uma no uta also refers critically to a modern Japan in which machines have replaced the horse. Nature is eulogized by the adult narrator, whose comment on the images of horses drinking the water of a creek is: “The water is pure. Humans can drink it too.” 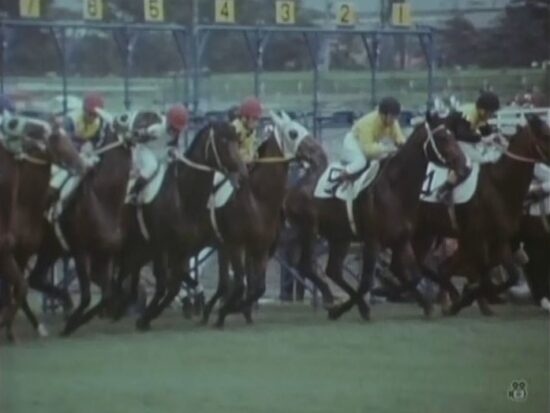 In the second part of the film, Kurosawa puts the emphasis on horse racing, something for which he had a lifelong passion. The film presents a very positive image of this sport, showing how well the horses are treated. When the animals are seen after their bath, the comment given by the older actor is: “This is the life of kings.” Sequences showing the crowd of spectators gathered for a race contrast sharply with the images of virgin nature in the first part of the film. However, the race sequences also alternate with landscape shots, and at the end Kurosawa shows the natural setting of the film’s beginning and presents another foal, perhaps a future champion? This return to the beginning and to a new cycle of events and to nature evokes narrative strategies inspired by Noh theatre developed in the 14th and 15th century by the Noh actor and theorist Motokiyo Zeami (1363-1443), who was highly regarded by Kurosawa. Uma no uta employs these strategies in its structure, which is reminiscent of Zeami’s jo-ha-kyu concept. The succession of single shots of artefacts at the very beginning (jo) evolves towards the more accelerated rhythm of the main part (ha) and slows down at the end again (ka). The themes, narration, and the aesthetics of the film undeniably bear the director’s stamp, familiar from his fiction films. This makes the documentary Uma no uta a fascinating part of the history of film and television, at the same time revealing clearly the director’s love of horses. 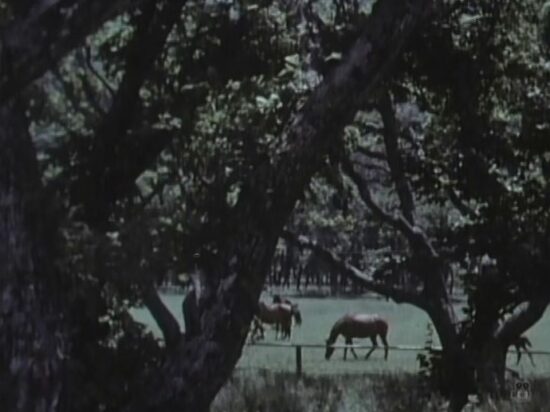