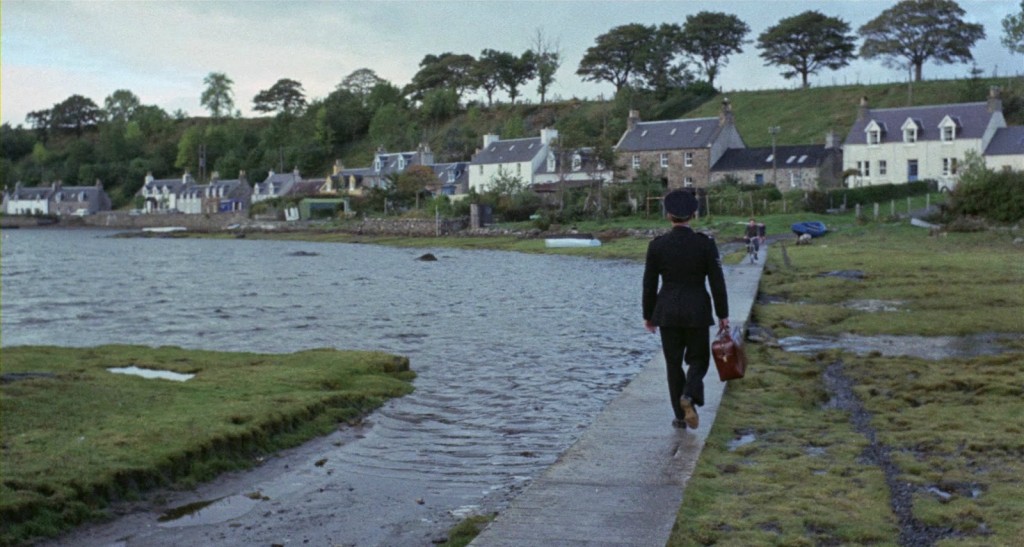 Our relationship with the countryside is a theme that runs strongly throughout British horror cinema. The isolation of a remote community can be used to create a frightening atmosphere, as behind the pastoral veils of village life lay dark and dangerous secrets. Travel with Kieron Moore as he explores some of the darkest depictions of the British countryside…

The rural village: the idyllic utopia of British countryside life. Beautiful greens, old women gossiping, the bleating of sheep. That’s how we’re introduced to Midwich at the beginning of this classic John Wyndham adaptation.

But all is not well in this particular village, and, after a surreal incident in which all its inhabitants fall unconscious simultaneously, the town’s women find themselves impregnated by an extraterrestrial force, soon giving birth to a generation of telekinetic super-children who grow twice as fast as the average child and learn even faster.

Cold, emotionless, and almost identical with their blonde hair and smart school uniforms, these children have been read as representative of many threats facing traditional village life at the turn of the 1960s, from changing attitudes to female sexuality or communist infiltration, but whatever your interpretation, one thing is clear – the intensely creepy children of Midwich are one of British science fiction’s most iconic images. 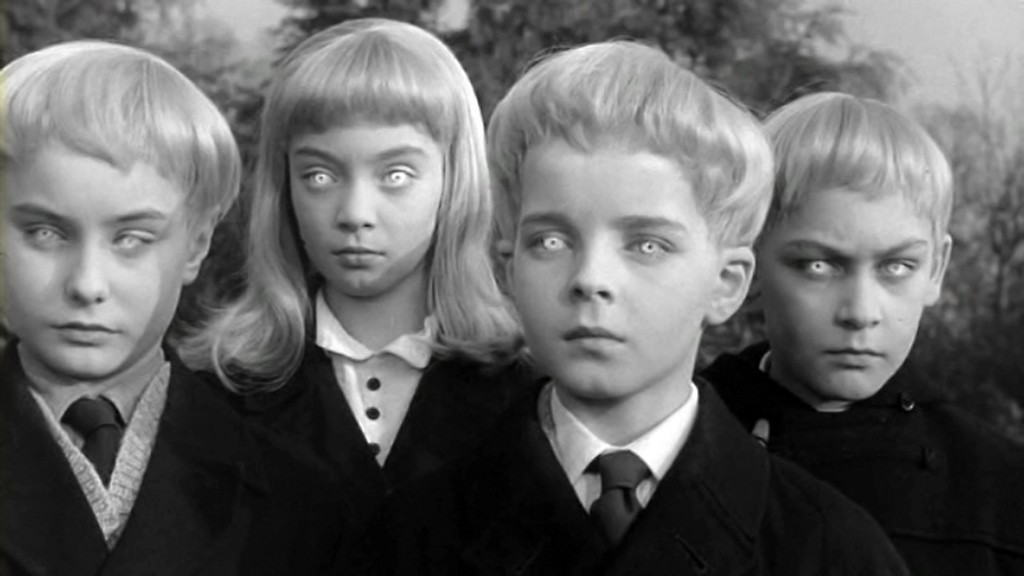 No list of British horror movies is complete without an addition from the Hammer canon. John Gilling’s The Plague of the Zombies employs traditional British village life as a means of exploring the inequalities of the class system – via a gang of lumbering zombies, of course.

Sir James Forbes (Andre Morell), a Professor of Medicine, is called to a remote Cornish village, where his former student is perplexed by a spate of mysterious deaths. Their investigation leads to the malevolent Squire Hamilton (John Carson), who, after a trip to Haiti, has become involved in voodoo and is turning the villagers into zombies to mindlessly labour in his treacherous tin mine.

The squire and his snide huntsmen are a satire on the exploitative upper classes, with the zombies they create resembling medieval peasants, while Gilling uses the rural setting to create fantastically frightening imagery – most notably the iconic scene in which zombies dig their way up from a church graveyard. 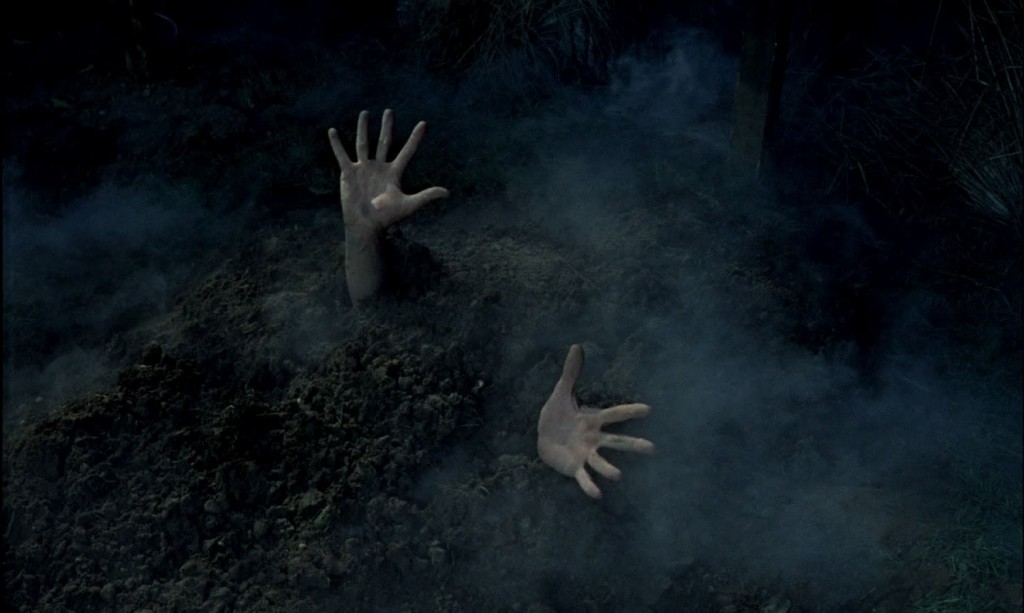 The terror of Michael Reeves’ Witchfinder General lies in the contrast between the beautifully shot East Anglian countryside – rolling hills, charming villages – and the inhuman violence that follows Witchfinder Matthew Hopkins (Vincent Price) around. Upon hearing of his approach to Brandeston, priest John Lowes (Rupert Davies) insists that his niece Sara (Hilary Dwyer) be taken away by her fiancé – and for good reason, as, when Hopkins arrives early, he has Lowes tortured and sexually exploits Sara.

It’s not just Hopkins’ brutality that terrifies, but the acceptance of this by the superstitious villagers, going as far as to cheer on the killings. Anyone who stands up to the lavishly adorned Witchfinder doesn’t stand a chance, but most remain passive; in one striking scene, children roast potatoes over the flames that have just murdered Hopkins’ victims. Witchfinder General is as much a criticism of passivity towards injustice as it is a staple of 60s horror. 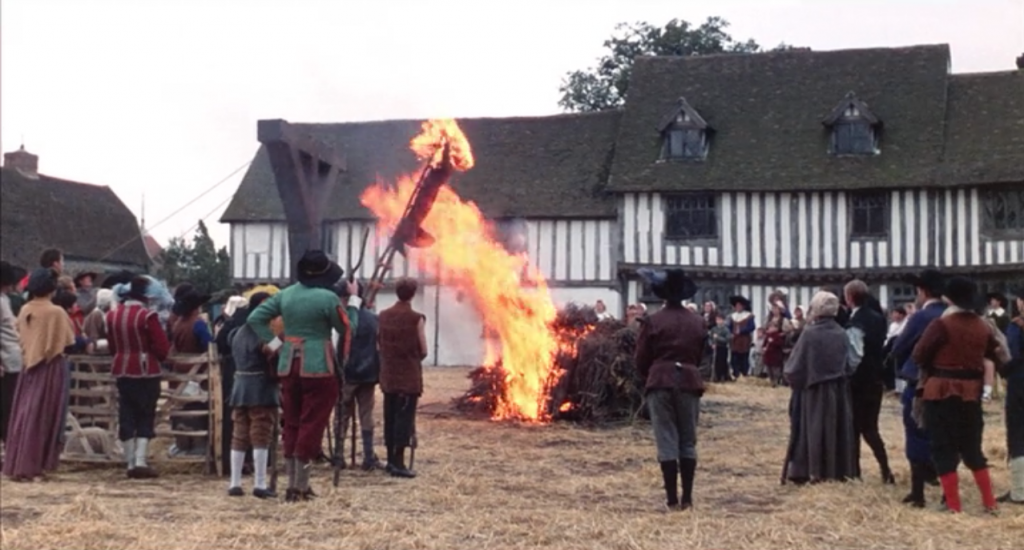 You know the story –Edward Woodward is the devoutly Christian Sergeant Neil Howie, there’s a missing girl on an island, and the villagers seem to be keeping secrets from him.

Summerisle, from which Howie finds himself unable to escape, is unnerving. It’s Britain as we know it – the corner shop, the pub – but it’s a place where the “old gods” are worshipped instead of Howie’s beloved Christian deity. From the public displays of sexuality to the lack of a minister, their lifestyle appalls him. Two distinctly opposing religious ideologies clash – and Howie’s massively outnumbered.

Of course it doesn’t end well for him. Pagan tradition wins out over Christian law, and the ritual sacrifice that makes up the final fifteen minutes of the film is haunting, majestic, and unforgettable. With its richly deserved cult following, The Wicker Man is the defining centerpiece of British folk horror. 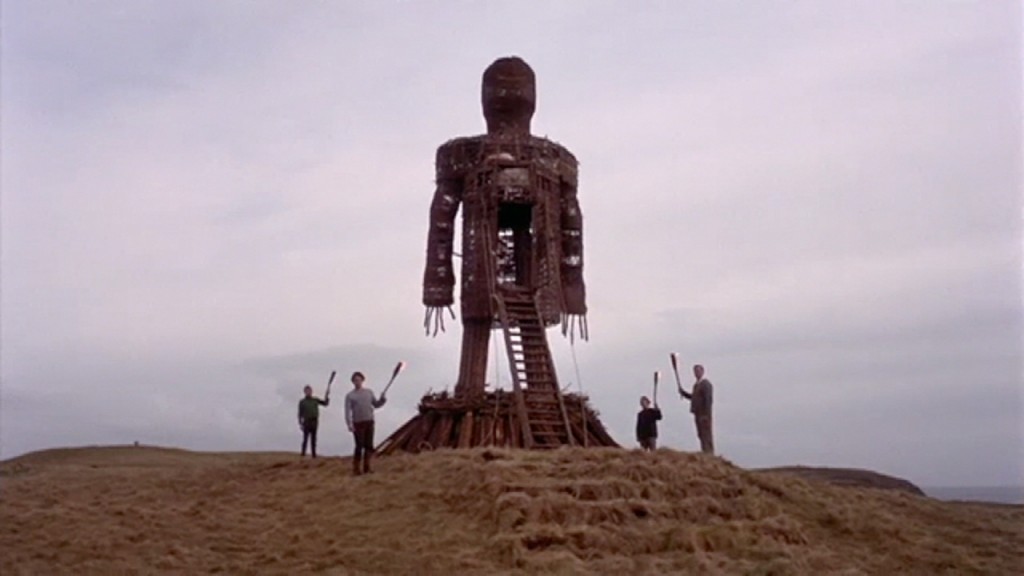 This may seem like the odd one out here, as the second instalment in Edgar Wright’s ‘Three Flavours Cornetto’ trilogy may be more associated with the action-packed cop movies it references, but look closer and Hot Fuzz also pays a substantial debt to the rural horror genre.

The basic plot – an uptight police officer is sent to a remote village which turns out to be under the control of a sinister cult – is taken straight from The Wicker Man, while its satire on village life is a quick-witted take on the same themes explored in Village of the Damned and The Plague of the Zombies.

Starring the best of British comedy talent, plus an appearance from Howie himself, Edward Woodward, Hot Fuzz is unrelentingly funny and sends up just the right horror tropes to earn it a place on this list. If you haven’t seen it yet, you really should – it’s for the greater good…

The movie that really launched the career of Ben Wheatley, after the positive response to his debut Down Terrace (2009), Kill List lays more claim than any other film to being the definitive modern take on the folk rituals as seen in its clear antecedent.

But this doesn’t manifest itself clearly until late into Wheatley’s slow-burning thriller, which starts off clean and domestic before gradually descending into madness and abject horror. Struggling to fund his consumerist lifestyle, hitman Jay (Neil Maskell) takes on a job for a mysterious client, only to find himself enmeshed in the machinations of a deadly cult.

Jay and colleague Gal (Michael Smiley) witness the cult perform a horrific ceremony in the woods, signalling the beginning of the film’s final act. Isolated in the harsh countryside and with his family in danger too, Jay’s fight for survival is as unnerving as any classic horror, and has a truly shocking ending. Wicker Man (1973) fans fear not, British horror is in safe hands.

And surely also David Keating’s Wake Wood (2011)? Though it loses focus at the end, the opening and especially the resurrection process are the very definition of rural horror. You could also make a case for David Rudkin’s brilliant Penda’s Fen being some kind of catalyst for such films, even if out and out horror isn’t its purpose (of effect).