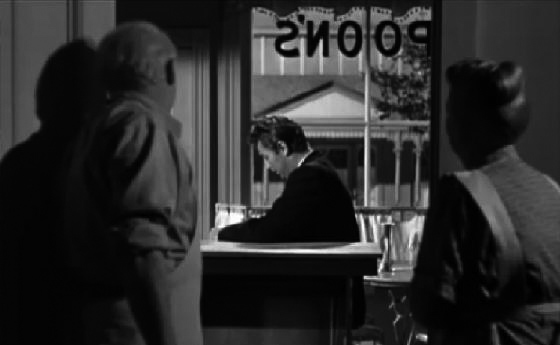 It probably wasn’t planned this way but it’s really quite remarkable how often the film characters played by actress Shelley Winters met a watery grave. One of her most hauntingly bizarre demises features in Charles Laughton’s lone directorial outing The Night of the Hunter.

To silence his new wife Willa (Winters) evil Reverend Harry Powell (Robert Mitchum) has slit her throat and dumped her body in the river, tied to and weighed down by her car. The old inebriate fisherman Birdie Steptoe (James Gleason) manages to hook the car with his rod and make the grisly discovery. The effect of the river’s current can be seen in the movement of Willa’s hair, mimicked by the movement of the underwater vegetation to produce one of cinema’s most a grotesquely serene moments.

If you ever wondered, no it isn’t Shelley Winters herself tied to the vehicle holding her breath. She confirmed that to Graham Fuller for Interview magazine:

Oh, that wasn’t me. They used a model and made a mask of my face, which in those days was really torturous. They put a straw in my mouth, covered my eyes with little pads, and made a mold of my face with plaster of paris or something. It gets quite hot, and it’s very scary. I’ve drowned a lot in my movies.

That’s something of an understatement. She ends up falling out of a rowing boat and drowning in A Place in the Sun (George Stevens 1951), fleeing from a bathful of water after reading Humbert’s diary only to succumb to a rain-soaked death in Lolita (Stanley Kubrick 1962) and corpsing in the wreckage of the upturned liner in The Poseidon Adventure (Ronald Neame 1972). In the latter she did at least get to prove that she could swim underwater before expiring of a heart attack from the effort. Sources indicate that there are a couple of other cinematic subaquatic death trips for Shelley out there to be identified. The first person to write in with the film titles and details of the demise wins a swimming lesson at the local baths.