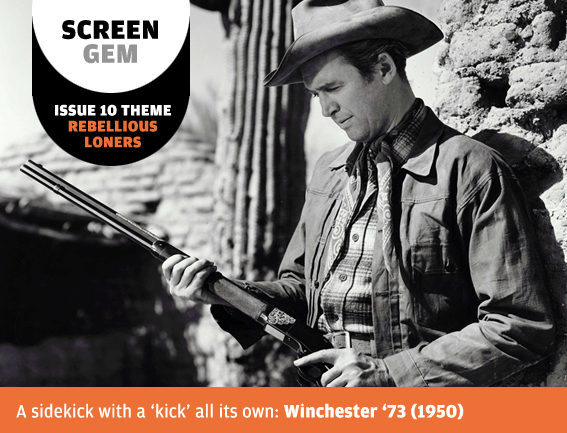 In Issue 10 of The Big Picture Scott Jordan Harris explains how events behind the scenes of 1950’s Winchester ’73 changed film forever. In this online companion piece, he examines the glorious gun that dominates the movie’s onscreen action.

Among the evocative objects identified as Screengems, the most elite are those that are eponymous. Iconic as Dorothy’s fabled footwear is, The Wizard of Oz is not called The Ruby Slippers and, though it would have made things far simpler for all concerned, Citizen Kane is not called The Rosebud Sled. There is, though, no other title that would serve Anthony Mann’s pioneering Western as well as the name of the incomparable rifle around which its story revolves.

Few objects in film are as fetishised, celebrated and sought after as James Stewart’s ‘gun that won the West’. The characters in the film, who seem to desire the titular rifle as much as Gollum desires the one ring to rule them all, spend their screen time either using the gun; trying to wrest it from whichever one of them temporarily possesses it; or describing its superiority to every other rifle ever slung over a shoulder or stuffed inside a saddle bag. Even Wyatt Earp worships beneath the Winchester ’73; holding it aloft before the shooting contest deemed the only fit way to determine who is deserving enough to own it, he gives the gun an introduction filled with such protracted praise he could be a Communist Party press officer giving a speech about Stalin at Uncle Joe’s birthday.

Earp explains that the Winchester ’73 in Winchester ’73 isn’t just a Winchester ’73. It is the rarest of rifles: a ‘One in One Thousand’ Winchester ’73 that has emerged from its production process as absolutely perfect. Such guns are literally priceless and only ever given away. Abe Lincoln received one; Buffalo Bill received one; and so will whichever of the assembled shooters shows himself able, as Morgan Freeman puts it in Unforgiven, to ‘shoot the eye out of a bird flyin”.

The Winchester ’73’s literal significance is enormous: it is unfailingly accurate, instantly deadly and, most crucially, a reliable ‘repeater’. The US Cavalry have only single-shot rifles, which is why Crazy Horse’s troops, who were packing Winchesters, could so easily massacre General Custer’s. In a lawless frontier, a Winchester ’73 is the highest authority.

The symbolic significance of the ‘One in One Thousand’ Winchester is even greater, however. It is solid, straight and true and – as all those who die while they have it discover – it can only be kept by a man who shares those qualities.

1000 Words: James Stewart, Winchester ’73 and the start of the star system