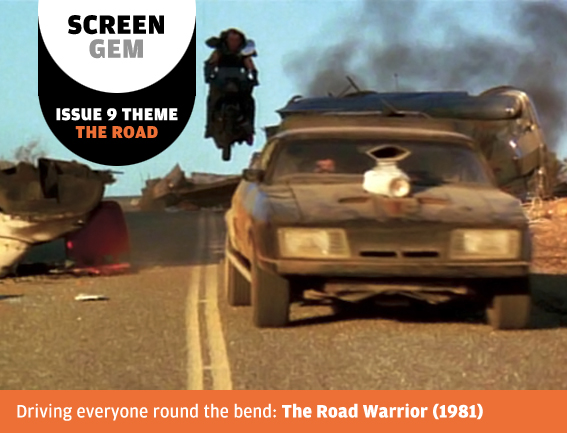 When Federal highway police officer Max Rockatansky is finally driven over the edge by the outlaw biker gang that mows down his wife, child and best friend, he knows he needs a vehicle capable of outrunning his enemies. Consumed by a murderous rage ‘Mad’ Max heads to the Halls of Justice to collect just one thing – the last of the V8 Interceptors, once the Main Force Patrol’s prime tool in its battle against the ever-increasing anarchy on the highways of Australia.

The jet black supercharged pursuit vehicle, a symbol of the last vestiges of law and order in a decaying society, becomes, in Max’s hands, a weapon used to track down and kill those who destroyed his life.

In The Road Warrior, Max is initially prepared to risk life and limb to obtain the fuel that would keep his V8 on the road; only after the vehicle is destroyed and Max nearly killed does he begin to regain some of the humanity that had been stripped away. Without the Interceptor, he is distanced from the other road scavengers he has come to resemble, its destruction forcing him to reevaluate and his nomadic lifestyle and give it some sense of purpose. In reality, the V8 Interceptor was a modified 1973 XB GT Ford Falcon Coupe (a car exclusively made for the Australian market) that now resides in the ‘Cars of the Stars’ museum in Cumbria, England. The iconic vehicle epitomised Max’s descent into savagery: powerful, intimidating and instantly recognisable the V8 Interceptor cut a deadly path across a scorched Earth and into the annals of cinema history.