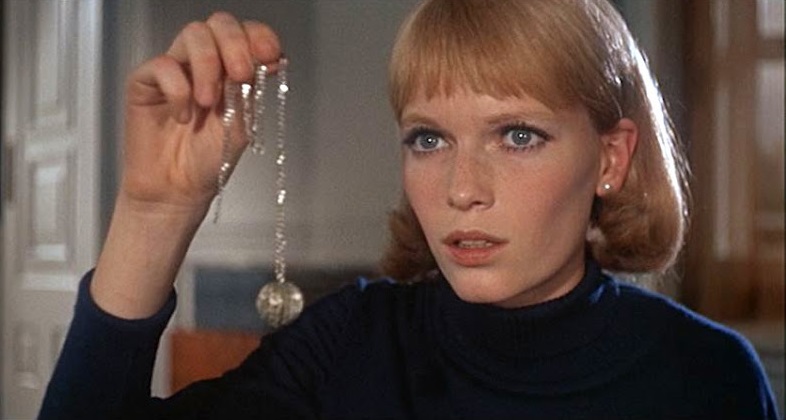 (Minnie) “Oh, before I forget, this is for you from Roman and me. It’s just a little present is all. For moving in… It’s real old, over 300 years… The green inside is tannis root. That’s for good luck.”

(Minnie) “You already have. Put it on. You’ll get used to the smell before you know it.”

Young Rosemary Woodhouse (Mia Farrow), having recently taken up occupancy of an apartment in New York’s Bramford building, should have smelled a rat the very moment that nosey neighbour Minnie Castevet (Ruth Gordon) presented her with a silver filigree ball pendant on a chain containing a piece of the strong smelling root. She had seen the same lucky charm before, around the neck of Terry (Victoria Vetri, credited as ‘Angela Dorian’ the name used by the actress for her Playboy model photoshoots), a recovering drug addict given shelter by Minnie and her husband Roman (Sidney Blackmer) in their seventh floor Bramford apartment. She would see it again, in a pool of blood on the sidewalk after Terry jumped to her death from the window of the Castevet’s apartment in an apparent suicide.

Rosemary’s acceptance of the charm knowing that Terry had been wearing it at the moment of her death seems curiously naive. But in her own homespun, busybody way Minnie Castevet is ‘charm’ personified. The present is received, Rosemary’s husband Guy (John Cassavetes) encourages her to wear it – we’ll learn that he is already in league with the Castevets – and the path to her demonic sexual liaison is prepared.

Only as the course of her infernal pregnancy progresses does Rosemary discover more about the contents of the pendant. A copy of a book entitled ‘All of Them Witches’ owned by her old friend Hutch (Maurice Evans), who succumbs to a fatal curse conjured up by the Castevets, comes into her possession. In it she finds a passage underlined by Hutch:

In their rituals, they often use the fungus called Devil’s Pepper. This is a spongy matter derived from swampy regions having a strong pungent odor. Devil’s Pepper is considered to have special powers. It has been used in rituals and worn on charms.

All too late she realises that the pendant’s contents are a binding symbol of the coven; she disposes of the necklace given to her by Minnie but when the receptionist at the practice of Doctor Sapirstein (Ralph Bellamy), the gynecologist foisted on her by the Castevets, happens to mention that her employer sometimes bears the same pungent aroma, Rosemary’s worst fears are confirmed.

Tannis root it should be said is entirely fictitious, a made-up substance that serves simply as an intriguing plot device. Of course in the world of online spiritualism plenty of the practitioners of Wicca will be happy to sell you sachets of various root derivatives designed to dispel, protect and purify in one way or another, but you won’t find tannis among them. Devil’s claw root and mandrake root perhaps, although post-Harry Potter these seem pretty fanciful.

However, counterfeit tannis seems to be a roaring trade on the craft website Etsy in replica tannis root necklaces designed to look just like the bauble from the film, proving that as iconic objects from horror movies go, few are as decorative as Minnie Castevet’s little present to Rosemary. As Guy Woodhouse says: ‘Tannis, anyone?’

Rosemary’s Baby
Is my favorite movie of all time, it’s the only movie where I know every line of dialogue .
I bought a few of those “tannis root” charm replica on Etsy .
They were high quality and relatively inexpensive. It’s also fun to make Vodka Blushes and “Cjhocalare Mouse “.

I want that necklace..to put dried lavender in. But it’s unique and BEAUTIFUL,.

Correction, Guy didn’t say “Tannis Anyone?” Rosemary did, after Minnie and Laura-Louise had left and Guy came home, Ro took off the necklace and hung it in her vanity mirror, said “Tannis, Anyone?”, she then put the charm in a tin box, and placed the box in her vanity drawer.

You could put Valerian Root inside the necklace. It has a bad smell to it (like smelly feet). Have people smell it and they’ll wrinkle their nose at it, too. Lol. It is probably where the Author got the idea from and named it Tannis, I bet.

How long was the chain???