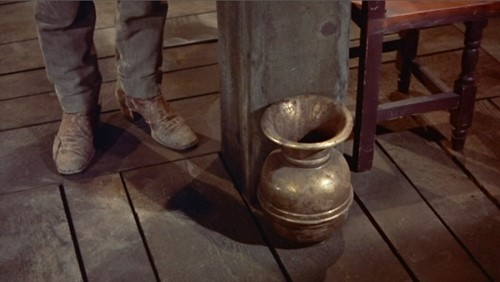 Old pals John Wayne (as Sheriff John T. Chance) and Ward Bond (as Pat Wheeler, soon to be murdered, shot in the back) have a conversation that says much about the good guys’ dilemma in Howard Hawks’ classic Western Rio Bravo (1959).

Wheeler: A game-legged old man and a drunk. That’s all you got?
Chance: That’s WHAT I got.

Wheeler is doubting Chance’s sanity and fearing the very worst will come of the lawman’s ongoing conflict with powerful bad-guy rancher Nathan Burdette (John Russell), whose men are “bottling up” the titular Texas border town while Burdette’s thuggish brother, Joe (Claude Akins), is held in the jail.

The “old man” is Stumpy, played with customary cackling irascibility by veteran Walter Brennan. The “drunk” is Dude – yes, Lebowski fans, Dude – a role taken on by a smooth crooner / actor you may have heard of – no stranger to barflies – one Dean Martin. 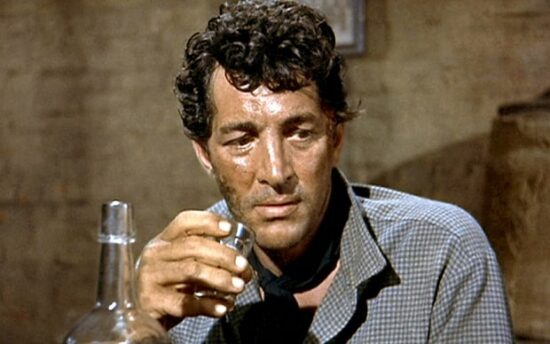 The films of Hawks (1896-1977) included enough male bonding and bromance to make you spit, and often proffered up “a romantic view of men in action”, according to David Thomson, in his The New Biographical Dictionary Of Film. Thomson also brings attention to the “ritualistic situations that obsess (Hawks)”.

Rio Bravo’s celebrated, dialogue-free opening sequence sets up such a situation, a ritual to be repeated later in the picture. Dude, in the saloon, desperate for another drink, is tested by Joe, who pitches a coin into the spittoon for Dude to dare to retrieve. Here we are among the dregs of humanity with no patter, much splatter. How low can Dude go?

Maybe you’ve been there – not actually reaching into the spittoon, but striking your own personal rock bottom, a landing so tough it surely let you know just how far you’re capable of falling.

The slimy receptacle, looming like the ninth circle of Hell, could be cast as a scaled-down Colosseum of masculine competition – who can expectorate furthest to reach it or, if volume is the test, ring it loudest? Who would risk wearing it on his hand, to be treated like a leper, or perhaps on his head, like some kind of clown? Your worst nightmare, the one-eyed monster, spumed like a debased jacuzzi, states simply: “J’accuse!”

It’s Chance who saves Dude from a fate worse than the smell of last breath and, as Rio Bravo plays out, we’re firmly in the Hawksian universe, caught up in a story revolving around a group of expert, professional men, pulling together for a greater good.

It is Chance who continually attempts to cajole Dude off the bottle, later telling his worse-for-wear, feeling-sorry-for-himself sidekick: “Don’t set yourself up as being so special … think you invented the hangover” – Ouch! A line to send any drunk (or borrachon, as Dude is called in Spanish) diving for the spittoon.

The sheriff also finds time to conduct an extended wordplay of a romance with Angie Dickinson’s alluring, gabby Feathers. Both characters have obviously been around the block – or at least up and down the Western street – more than a few times but there is still something queasily innocent about the exchanges. Their battle of the sexes feels more like a schoolboy’s wish-fulfilment fantasy of “perfect” love – she’ll trade innuendos, twinkle at me, lose her temper, try to understand me then give up, before donning slinky undergarments and challenging me in a way I don’t fully grasp. Chance conducts much of his bartering and bantering with Feathers while standing in doorways, seemingly never sure if he should stay or make a break for it. 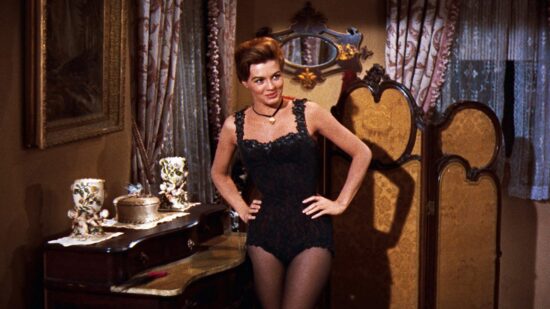 Dude has already fallen foul of this complicated puzzle of the fairer sex, hence his drinking days, but he stays on the wagon long enough to sing of his commitment to a Holy Trinity – “My rifle, pony and me …” – after eager young gun Colorado (fellow music dude Ricky Nelson) and a truly smitten Feathers join up with the drunk, the game-legged old man and John T.

Much of it is painted in broadly comic brushstrokes – in one knockabout moment, Chance kisses Stumpy on the forehead (Jumpin’ Jehoshaphat! A fate worse than sticking your hand in a spittoon?!) – but there is little doubt what is really at stake. Thomson wrote of Hawks that he is “at his best in moments when nothing happens beyond people arguing about what might happen or has happened”. One such “what if?” ends with Chance making matters clear: “We’d all be dead by then.”

There is frequent talk of being “good”, “good enough” or even “better” – I dare you, play a Rio Bravo drinking game and take a shot every time someone says “good” or a derivation of it – but, in the end, thanks to teamwork, the patched-together gang are truly united in success, relief, love and mirth, a whole better than the sum of its parts, the hole in the spittoon finally exorcised.

“The sun is sinking in the west,
The cattle go down to the stream …
The redwing settles in the nest,
It’s time for the cowboy to dream …

“Purple light, in the canyons,
That’s where, I long to be,
With my three good companions …” 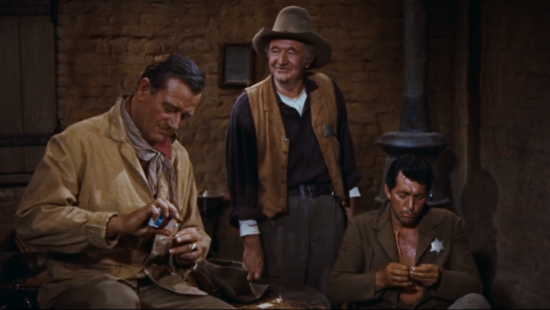