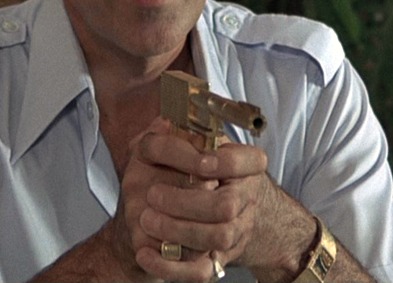 Of all the James Bond films, The Man With The Golden Gun may well be the one that most inspired those definitive spy spoofs, the Austin Powers films. Everything in it is incredibly camp: there’s a villain with a private island, an enormous laser and a midget manservant (who Bond battles in his – and, indeed, the world’s – least impressive bout of fisticuffs).

There is much Seventies-style faux-kung-fu of the ‘judo chop!’ type; and one of the plot’s chief calamities is brought about by Britt Ekland’s sexpot secret agent not watching where she’s thrusting her beautiful bikinied bottom.
None of this, though, sums up the ridiculousness of the movie quite as well as the titular golden gun.

Owned by Francisco Scaramanga, Christopher Lee’s expert assassin, the precious pistol is assembled from a pen, cufflinks, a cigarette lighter and a cigarette case, and fires only one, 23-carat gold, bullet. The film seems uncertain whether the weapon is the deadliest gun in the world (thus glorifying it as an object) or – as a single-shot, self-assembly, soft-metal handgun – one of the most difficult to use (thus emphasising Scaramanga’s prowess as a marksman). 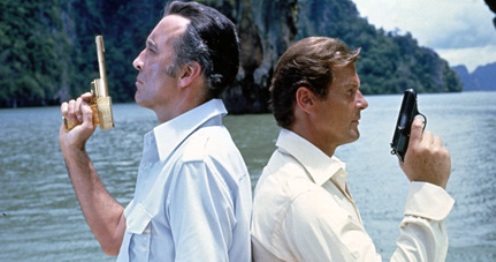 As such, the gun is absurdly silly – and utterly unforgettable. It’s emblematic of a particular type of action movie that, considered in retrospect, was so suffused with self-parody it is astonishing Mike Myers found so much in it left to mock. The golden gun has such appeal that in 2008 a version of it, valued at £80,000, was stolen – possibly by an international criminal mastermind – from the props department at Elstree Studios. I say we despatch our best double-O agent to retrieve it.