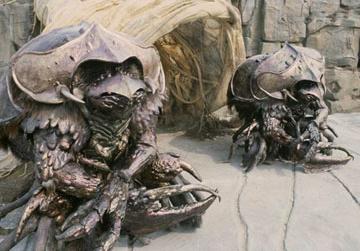 It started with a green sock with ping pong balls for eyes. Years later some of the creatures to feature in Jim Henson and Frank Oz’s dark and scary children’s fantasy epic The Dark Crystal were about as cuddly as a monster cactus wrapped in razor wire. Hide your eyes children: here come the Garthim!

Being the mere grunts of the outfit, there were no Garthim speaking parts. Instead they announced their approach with a clitter-clattering death-rattle of flailing pincers and clanging carapaces. As legendary conceptual designer Brian Froud, in his book The World of The Dark Crystal, put it: ‘The strength of the Garthim was unbelievable, their stupidity incalculable. Their sole purpose was to destroy all they found.’ Froud was seemingly obsessed with lobsters at the time, which explains a lot about the look of the Garthim.

The costumes were one of the film’s many technical marvels. The final versions weighed around seventy pounds each, with the main bulk of the shell segments ‘floating’ on the performers’ backs and shoulders using specially designed harnesses. Each Garthim costume consisted of 59 individually hand-made pieces. At one stage a two-person rig was tried in order to achieve the required many-jointed movement but except for a handful of close-up shots each Garthim used in the film was operated by a single performer. The costumes were so heavy that the performers had to be hung up on a rack every five minutes to rest whilst still in costume. 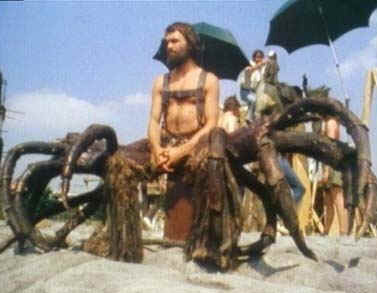 A resting garthim on set

My first sight of a Garthim was not in the dark confines of a film auditorium but when watching the Russell Harty chat show. Harty had Henson and Oz in the studio to promote the film and during the programme we were treated to appearances by Kira the Gelfling and Fizzgig her little furball sidekick. A Mystic ambled on set at one point and a Skeksis sat alongside Russell, Jim and Frank at a banqueting table.

Just when the audience thought the show was over a fearsome Garthim burst through a (polystyrene) studio wall and performed a sort of violent Haka at close quarters for the benefit of the front row. The trouble was the other item on the show that night had been a celebration of the Children of Courage Awards. The poor little award-winning tots, many of them fighting off life-threatening illnesses, looked absolutely terrified. I was quite shocked but also somehow amused; all these brave girls and boys being frightened to death by a man dressed as a crab-beetle.

1982 seems a long time ago, and it gets harder and harder to scare the bejesus out of kids. 2011 will see the much delayed but heavily anticipated sequel The Power Of The Dark Crystal so we will just have to see how knicker-wettingly scary they can make it for today’s pre-teen sophisticates. Dear Michael and Peter Spierig (the German-born Aussie directors of the film): please please please let there be Garthim. Brian Froud is certainly on board once again and my sources indicate his crustacean fascination remains undiminished…

The Power of the Dark Criystal