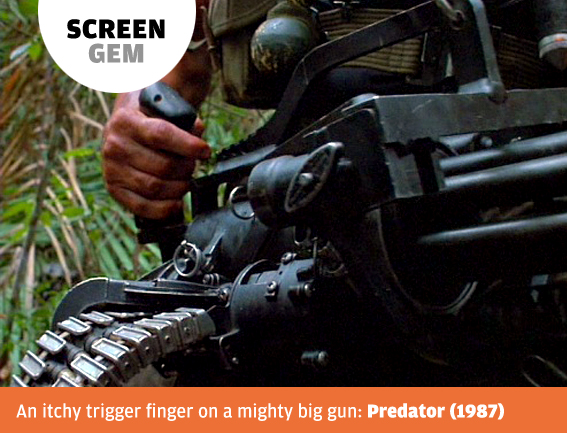 ‘Going to war without France is like going deer hunting without your accordion’. So said that famous raconteur and aesthete ‘Stormin’ Norman Schwartzkopf. When John McTiernan dropped his crack troupe of commandos into a Central American jungle meat-grinder in the film Predator he made sure they were packing more than their accordions. Ladies and gentlemen, I give you: Ol’ Painless.

NRA sympathizers and other sociopaths out there might like to know that the firearm in question was an adapted Dillon Aero M134 Gatling Gun capable of unleashing an almost  hilariously fatal 4000 rounds per minute and designed originally to be combat helicopter-mounted. Certainly not something to be handled on the ground by one man. Unless that man is Jesse ‘The Body’ Ventura.

Ventura, who subsequently entered into politics on a surprisingly leftist ticket for somebody with so much testosterone in their system, got to play with this ultimate boy’s toy and did his bit for global deforestation in the process. Is it wrong to find the total killing power of a gun amusing? The bullets come out so fast you can barely hear the gaps in between for chrissakes! For some reason this has always made me laugh. It’s so utterly deadly that it’s funny. Or maybe it’s just time for my medication again.

Some kindly soul has edited together all of Ventura’s scenes from the movie so as well as being able to cut to the chase and glory in his wielding of the weapon that Bill Hicks would no doubt have eloquently described as a ‘big, black cock of death’, you can also listen once again to the Big Man’s legendary lines – ‘bunch of slack-jawed faggots’, ‘goddamn sexual tyrannosaurus’, ‘Son of a bitch is dug in like an Alabama tick’, I ain’t got time to bleed’, etc. It fair knocks the Admirable Crichton into a cocked hat does it not? 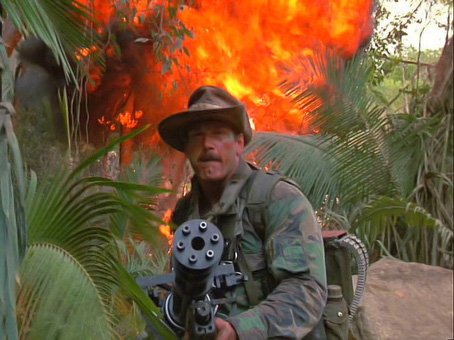 Of course Ol’ Painless itself has built up something of a fan following down the years. It seems to be a particular favourite of amateur replica gun-makers, some of whom have chosen to share the fruits of their rather sad and questionable labours via the medium of the web. Marvel for example at ‘Tony’ and his wonderful recreation. Girls: if you happen to encounter ‘Tony’ on an internet dating site be sure and ask what he keeps under his bed before committing to anything, okay?

Ol’ Painless devotees will be very pleased to see that it is due to make a reappearance in the soon-to-be-released sequel/semi-remake Predators (Robert Rodriguez 2010), that’s if you watch the trailer carefully, although not being operated by star of the film Adrien Brody who presumably was advised against picking it up if he ever held out any hope of playing the piano again.

After the AVP cobblers of recent times it’s just possible that Predators might not suck. The firing up of Ol’ Painless is one sign that the Rodriguez effort will be worth sitting through. Don’t forget to support your favourite weapon of mass destruction and give a little cheer every time it’s unsheathed. Or alternatively afterwards you could take the ‘seen the film, worn the T-shirt‘ approach. Remember: Ol’ Painless is waiting…