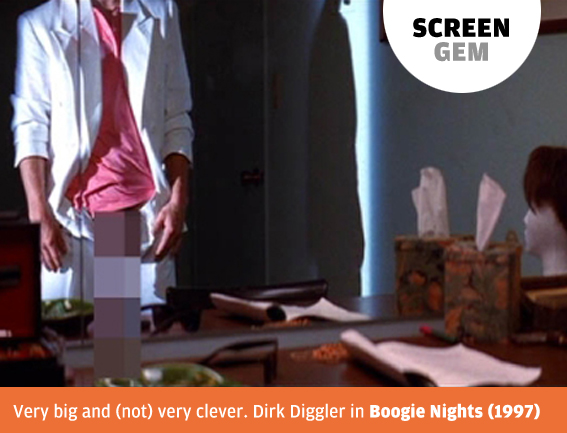 Indeed, the film’s frisson, and much of its humour, is reliant on what it cannot show. As it is a story based upon the life of famed porn performer John Holmes – who was so concerned his improbable penis would be cut from his corpse and preserved in some sort of macabre collection he insisted he be cremated – what it cannot show is the body part responsible for the lead character’s every action and, as such, for everything in the entire film.  Boogie Nights knows that we know it cannot show us that which, in a sense, we would most expect to see – which is why the film unleashes such a spectacular surprise when, moments before the end credits, we actually do see it.

The Dirk Diggler of the film’s final scene is, like the manhood on which he depends, defeated and deflated. He is, as per the insult often aimed at lotharios with little but their seduction skills to recommend them, simply a life-support system for his penis. And by this point in the plot he knows it, too, which makes his efforts to persuade himself otherwise melancholy when once they were amusing.

When he shows his impressive appendage to us, he is actually showing it to himself as he tries to recapture the belief that he is uniquely gifted. The first time we see the scene, the reveal is shocking and funny – but in subsequent viewings it becomes almost pathetic. Regardless of the fame, admiration, success, envy and anger it has inspired, Diggler’s endowment is just a drooping tube of bodily tissue, as weak and eventually unreliable as all human flesh.

Ultimately, what amazes most about Diggler’s infamous organ is that it doesn’t amaze at all. The prosthetic penis in Boogie Nights informs us that even when the emperor is wearing his new clothes he may still be naked.