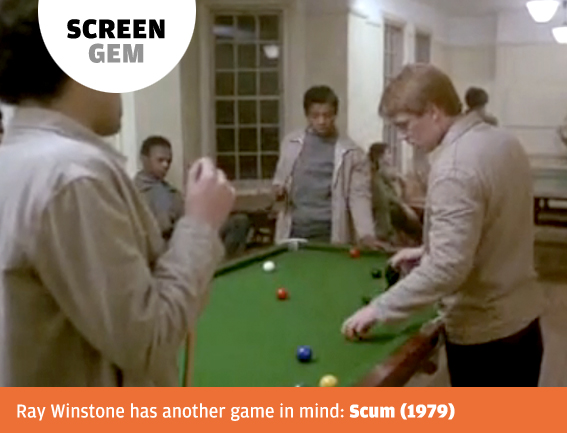 One of the great scenes in British cinema centres on two snooker balls in a sock. While the screws are out of earshot, Ray Winstone’s young convict, Carlin, creates a cosh and uses it to knock Phil Daniels’s Richards off his position at top of their borstal’s power pyramid as emphatically as if he’d killed him.

What’s so significant about the cosh is that it’s not a gun or a knife, a weapon that could be used by any idiot on an adrenaline rush, but one manufactured from ordinarily benign components. It establishes Carlin as what his rivals pretend they are but know they are not: a genuine gangster. He is, it announces, a mature criminal able to exploit the flaws in any system of confinement and willing to capitalize on any opportunity for an act of improvised evil. He doesn’t fight fair – in fact he doesn’t fight at all: he arranges every possible advantage and unleashes a maelstrom of menace.

Later in the same sequence, Carlin locates Pongo – until then the hardest of Scum’s youthful hardcases – mauls him whilst he shaves and tees off on his testicles before delivering the notorious and continually quoted statement, ‘I’m the daddy now!’ But his words are unnecessary: everything he needed to say, he said with those two snooker balls in a sock.