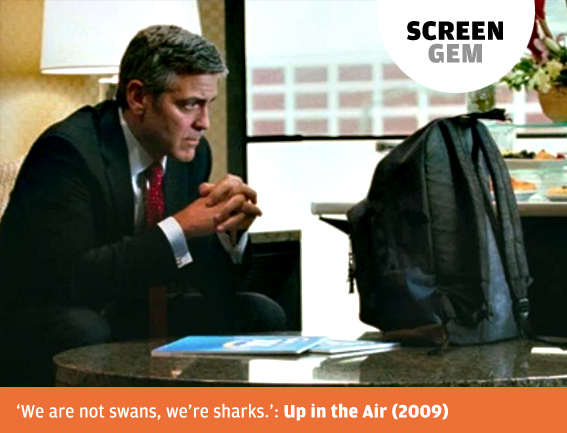 Up in the Air overflows with evocative objects. There is the sleek hand luggage that Ryan Bingham (George Clooney) calculates saves him a week a year (a week’s worth of hours being what anyone who flies as often as he does would waste checking in a suitcase before each flight).

There is the almost mythical engraved gold card given to frequent fliers who have amassed ten million air miles, the earning of which is the chief aim of Bingham’s existence. (‘More people have walked on the moon,’ he says, trying to impress the achievement’s importance on an incredulous colleague.) There is the ‘where do I know that face from?’ poster of the mustachioed chief airline pilot that appears in every airport, thanking Clooney’s character for his loyalty to his synthetic lifestyle. There is the kooky cutout of Bingham’s sister and her fiancé that Bingham is forced to photograph in a series of desirable destinations they cannot afford to visit. 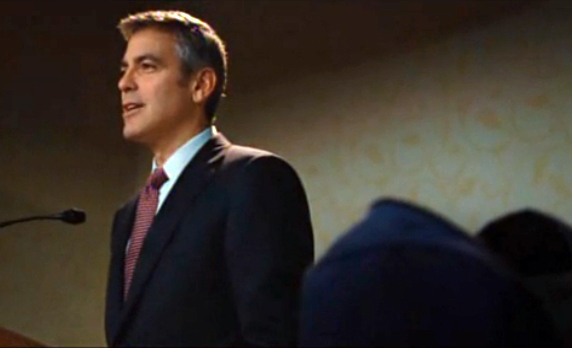 And then there is the backpack on which Bingham’s increasingly renowned motivational lecture is based. The backpack appears onscreen for only seconds in total – indeed, it may not be the same backpack we see each time – but its significance is enormous. Its purpose is to illustrate to Bingham’s audiences – those before him in conference venues and those before him in cinema seats – his core philosophy. The backpack represents everything we carry with us through our lives. Into it goes each responsibility and relationship, adding their weight, pulling us both back and down. The first time we learn of the backpack, we are encouraged to cram every commitment we have ever made into it – and set it alight. ‘Wouldn’t that be exhilarating?’ Bingham asks.

What Bingham learns, and we of course already know, is that the items we put into our backpacks are the cushions that protect us from life’s sharpest jags. Eventually, during the most prestigious speaking gig of his career, he literally abandons the backpack in the hope of cementing the kind of committed co-dependency against which he has long used it to argue. He fails. Ultimately, Bingham’s tragedy is not that he is forced to live forever with an empty backpack, but that he has lost the chance to choose whether to fill it.

Up in the Air is available to rent | See the trailer