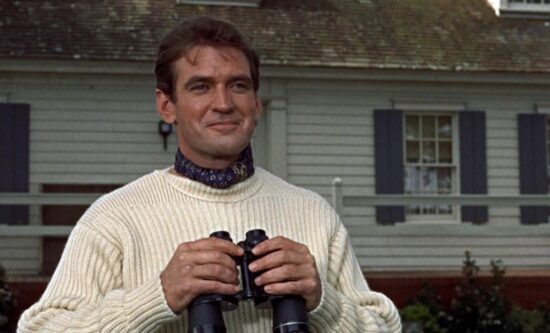 When Mitch Brenner (Rod Taylor) first meets Melanie Daniels (Tippi Hedren) in the bird shop in San Francisco, his look is impeccably executed. In his charcoal grey suit – fit cut, slim tie and white shirt – he is an urban careerist in San Francisco (a defense lawyer), equally brash and charming, arrogant and worldly. The suit sits well on him; actually, it is much more modern than the ones Cary Grant wore in Hitchcock’s films, more tailored to the body, a suit that would make much sense today. Mitch and Melanie are both sharply dressed, both very much in control, both provoking each other under false pretense – so wonderfully concealing-not-revealing Hitchcock.

Rod Taylor is not the first leading man one has in mind when thinking of Hitchcock’s films, especially in terms of style. It goes without saying that it is Cary Grant who occupies that place, and there is no denying that it’s with good reason. “He somehow managed to make the plain grey banker’s suit seem impossibly glamorous, sexy, elegant, even daring. The shirt, flawless white, the tie, knotted with surgical precision, completed the look. And that was it. That was enough. His suit spoke for him, sang for him,” as Richard Torregrossa wonderfully noted in his book, Cary Grant: A Celebration of Style.

Furthermore, in To Catch a Thief (1955), Grant made the perfect case for casual wear, a little less his trademark than the suit, but one which he excelled at again. But that’s why I appreciate even more Rod Taylor’s understated look in The Birds (1963). Somehow, it was expected of Cary to rise up to his image on screen, although without ever failing to benefit the plot. Rod Taylor, on the other hand, lets the character lead the way – he makes him real – and his style is just as subtle yet strong as his performance. I believe he is the most modern of all Hitchcock’s main male characters. 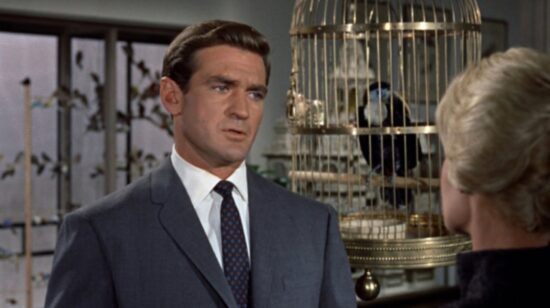 On the weekend, we find Mitch Brenner, and so does Melanie Daniels, at his family home in Bodega Bay, a few hours up the coast. With its boat-dotted harbour, winding roads through green meadows, and sturdy trucks, it is a tranquil fishermen’s village, where one meets a slower pace of life – it all sounds a little too familiar for what many of us have been gravitating to during these times, doesn’t it? The Brenners’ front lawn, with the bay and mountains behind, is particularly comforting… until it is not – all that open space will provide the ideal place for hundreds of birds to gather and attack.

Mitch is much more practically dressed around the house. Naturally, one may say at first sight. But the fact is there wasn’t often a clear delineation between office and off-duty wear in classic films before the 1960s. When shown at home, the man would usually be depicted with his office shirt still on, only slightly unbuttoned to loosen the tie and with the sleeves rolled up to suggest he is during his down-time. I like how Rod Taylor’s character is so distinctly different out of town. It is here where he seems to come into his own, in the bucolic setting of Bodega Bay. That may also be a subtle analogy to Melanie, who gradually becomes “more natural and humane,” as François Truffaut described her character to Hitchcock, after she arrives in Bodega Bay, a clear departure from her sophisticated, cool and collected look when she first meets Mitch in San Francisco. Everyone is irrevocably changed after the birds start attacking for no apparent reason. Man does change, gaining a new perspective on things in the face of unforeseen adversity. 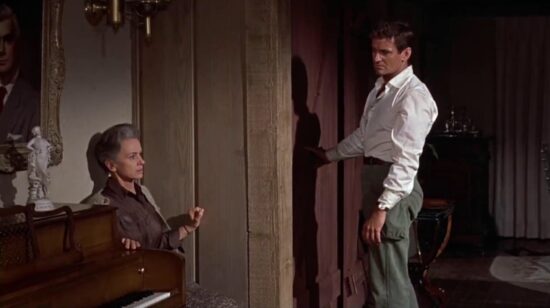 In his off-white fisherman’s sweater and blue neckerchief, Mitch Brenner gives a nod to the British heritage of both style pieces, and also to the working fishermen of Bodega Bay. What better garment with a storied past than the fisherman’s sweater, born out of utility, symbolising the importance of clan and unity within, something that Hitchcock’s character indeed seems to denote, with all the women in his life flocking around him?

His rugged masculinity does inspire strength and firm convictions and stability, so far-off from the combative flirtation and arrogance displayed when wearing a suit in the big city, and that’s why the tender moments and inner conflicts that occur after the birds start to attack – and his vulnerability in the face of danger – make him very relatable. And that’s exactly what Hitchcock counts on when the audience sees Mitch Brenner on screen.

Dressed in green side-pocket cargo trousers and white shirt, he starts to nail up the windows to the house. He has just taken off his tweed jacket. Previously, at his sister’s birthday celebration, he had sported the tweed jacket with the white shirt, slim tie and tweed trousers. The tweed jacket, with structured shoulders, flapped side pockets and short vents and worn with military pants, is a perfect blend of traditional English sports tailoring and American modern sensibility. Mitch Brenner ushers in the modern man, one who appreciates the classics but rejuvenates them to bring them up to the times. He also shows that he is not just a substitute for his late father, as his possessive mother considers him, but someone who strikes the right balance between the old and new worlds. Practical and rugged looking, he knows he must take everything in his hands.

Only you cannot control what you don’t understand and what seems to have no logical explanation. And this “ambiguity makes the threat operate at every level of audience consciousness,” as observed in Ian Cameron and Richard Jeffrey’s interview with Hitchcock, from 1963. It operates on Mitch’s consciousness too. You feel the danger and sense the fear just by observing Mitch Brenner in the most suspenseful moments: his concern when he comes to Melanie’s aid after she is hit by the seagull in the boat, his reaction to the birds coming down the chimney, his repeated attempt to get away from the birds that keep pecking his hand as he tries to close the shutter, the excruciating care with which he passes by the burbling birds lining the fences, trees and roof as he aims for the garage. By choosing Rod Taylor as his leading man, Hitchcock gets his message through in the most effective way: there is “too much complacency in the world, that people are unaware that catastrophe surrounds us all.”