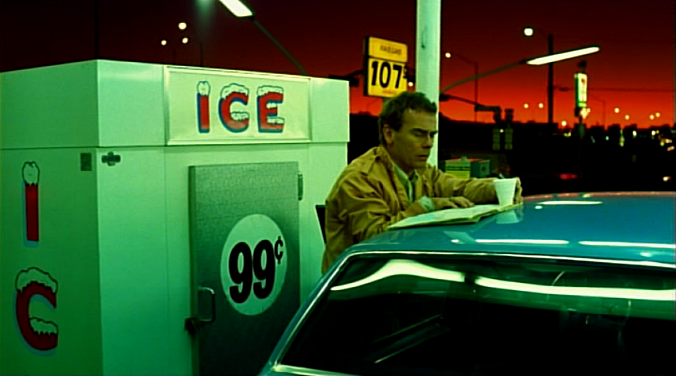 There is a fleeting scene about 8 minutes into Wim Wenders’ heartbreaking but life-affirming Paris, Texas that has stayed with me ever since I first saw it twenty-odd years ago. The scene is of Walt Henderson (Dean Stockwell) parked up at a gas station, checking a map which is propped up on the hood of his car while on the way to pick up his wayward brother Travis (Harry Dean Stanton) deep in the Texas scrubs. I had yet to experience the great American open road even though I was living in Los Angeles at the time, but this one glorious shot encapsulated how I had always imagined a typical Stateside road trip to look – and more importantly – feel like.

The first quarter of Paris, Texas is essentially a road movie which shows just how taken Wenders was, as so many of us are, by a generic roadside Americana that includes fabulously lit-up gas stations, convenience stores and diners bathed in multi-coloured neon that often transforms them into alluring dreamscapes. The unique ability of a filmmaker is, of course, to elevate these ‘non-places’ even more by the use of ambient sound, cinematography and action – something that Wenders has done so well throughout his career. As both a photographer and filmmaker, Wenders appreciates the power of the still image; many of his films use an idle camera, allowing scenes to unfold within the space of a carefully composed frame. This lingering, elegiac method fits perfectly with both the mood of Paris, Texas and the measured pace of Travis’ character as he makes slow but steady progress towards his personal redemption – and scenes such as Walt’s gas station pit stop help to establish this tone early on.

I’ve been lucky enough to venture out on a few American road trips since first watching the film in the late 1980s, so now have my own experiences to compare to those onscreen, and while I’ve thoroughly enjoyed each journey, none have quite lived up to the dreamy promise of Paris, Texas. Understandable, I guess, as reality very rarely lives up to a fictional account, especially one created by a filmmaker like Wim Wenders so versed in transforming the everyday into the extraordinary. 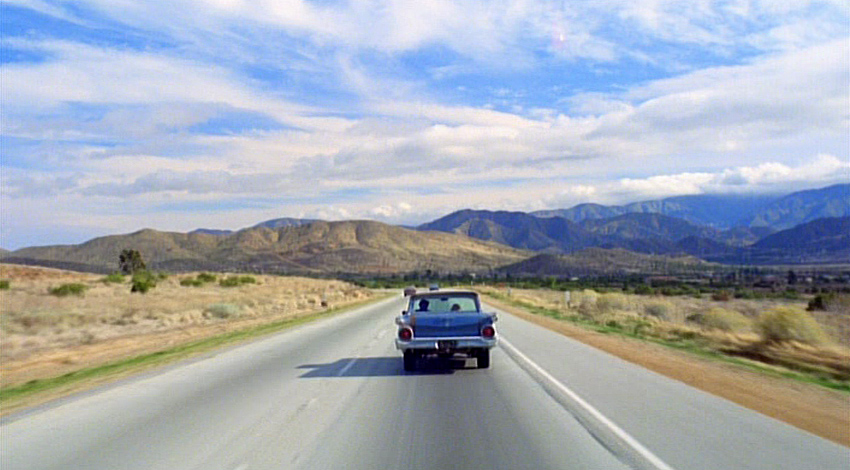 In his foreword to the book ‘On Location: Cities of the World in Film’, Wenders describes this evocative nature of landscape:

‘A street, or a house front, or a mountain, or a bridge, or a river, or whatever, is not just “background”. Each also has a history, a “personality”, an identity that deserves to be taken seriously.’

He reinforces this idea by putting forth the example of how the Aboriginal people of Australia see every landscape formation as embodying some figure from a mythical past – every rock, tree or hill carrying a story that is related to their ‘dreamtime’. I can fully relate to this and remember a time in my own childhood when spaces, landscapes and objects had this kind of resonance, either in how I co-opted them into my own imagined play-space or seeing what they could reveal about my own fears and dreams – e.g. that house is haunted or that skyscraper is literally scraping the sky.

These ideas and beliefs must inform Wenders’ filmmaking method and no doubt are one of the reasons why his films – Paris, Texas in particular – have made such an impression on me, essentially because I share the same beliefs. So when I see Walt sipping his coffee beside an ice dispensing machine as the setting sun ignites the sky into a thousand shades of orange, I don’t simply see what is there but what is ‘dreamed’, both by the filmmaker and by my own imagination.