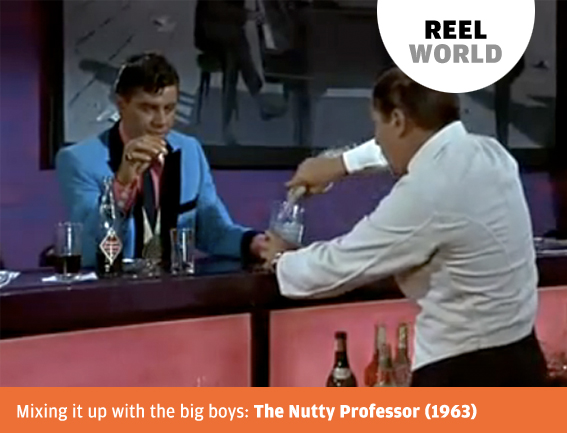 Every student film fan has invented a drinking game for a favourite movie. Some of the more incorrigible among them have tried to match Withnail drink for drink. But only the most dipsomaniacal of cineastes have ever attempted to knock back film’s most brutal booze: the infamous Alaskan Polar Bear Heater.

After Jerry Lewis’s eponymous educator in The Nutty Professor has downed the potion that transforms him into legendary lothario Buddy Love, he strolls to the Purple Pit nightclub and orders an even more potent concoction. The barman has never heard of an Alaskan Polar Bear Heater, so Love tells him how to make one:

‘Two shots of vodka… a little rum… some bitters… and a smidgen of vinegar… A shot of vermouth … a shot of gin… a little brandy … lemon peel … orange peel… cherry … some more [sic] scotch. Now mix it nice – and pour it into a tall glass.’

The bartender asks to taste the result and, inevitably, collapses after a single sip. Just as inevitably, Love drains it in one smooth motion.

The cocktail was entirely fictitious and intended to be so strong no one would ever actually drink it: that’s what makes the joke work. But fans soon copied Lewis’s (possibly improvised) recipe and began consuming the firewater it creates. Somehow, the Alaskan Polar Bear Heater became a legitimate drink. It is now frequently included on lists of cocktails alongside established tipples like the Long Island Iced Tea, the Manhattan and the Harvey Wallbanger and, in 2007, it was even named as Seattle Weekly’s ‘Drink of Year’.

Those who’ve sampled it often use the Internet to share stories of the night they drank the Alaskan Polar Bear Heater, and of how they felt the morning after. Some are likely to be lying – and so others film themselves to prove their boasts. In the same year as the cocktail won its award from Seattle Weekly, a video showing the preparation and (partial) drinking of a genuine full-strength Alaskan Polar Bear Heater by a YouTube user, known ironically as ‘The Liar’, won the attention of Modern Drunkard magazine – which, one imagines, is the highest honour for which the brave imbiber could have hoped.

If you’re keen to follow The Liar in following Buddy Love’s liver-endangering example, I can offer only a smidgen of advice. According to those who know, when you get to the part of the recipe that calls for the addition of vinegar, it really is best to use sherry and not malt.