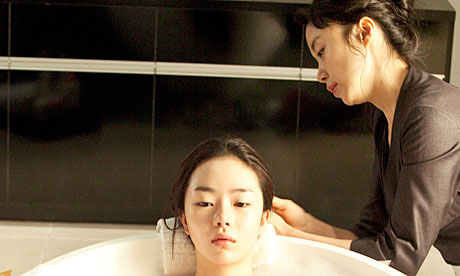 Following its European premiere at Cannes in May, Im Sang-soo’s classy thriller The Housemaid is a much-anticipated addition to the schedule of the 2010 London Korean Film Festival. The event is held at various venues in London starting from today and running up to November 14, with selected films screening at participating cinemas around the country. The line-up includes such titles as Kim Ji-woon‘s I Saw the Devil (2010) and Lee Jeong-bgeom‘s The Man from Nowhere (2010), while The Housemaid closes the festival with Im Sang-soo in attendance for a post-screening Q&A.

Although his name may not yet be as synonymous with New Korean Cinema as Bong Joon-ho or Park Chan-wook, the equally industrious Im is poised for an international breakthrough based on both the accessibility of The Housemaid and a back catalogue that is ripe for discovery. Not content with courting controversy with the overtly sexual dialogue of his debut Girl’s Night Out (1998), Im would tackle the homeless runaways of Tears (2000) and the dysfunctional family of A Good Lawyer’s Wife (2003) before embarking on his jet-black comedy The President’s Last Bang (2005). Im’s audacious account of the 1979 assassination of the Korean President Park Chung-hee – which portrayed Park as a party animal with a fondness for Japanese culture – caused the Seoul Central Court to order the removal of nearly four minutes of documentary footage due to Im’s depiction of historical figures. The ideology of the individual, rather than the machinations of the state, was the focus of his next feature, The Old Garden (2006), in which a former activist tries to readjust to Korean society after serving 17-years behind bars for his role the 1980 Gwangju Massacre which left 200 students dead. The Housemaid is a comparatively commercial undertaking, and this impeccably crafted thriller topped the South Korean box office chart when it opened in May. However, it has still been the subject of some heated discussion due to the fact that it is a remake of Kim Ki-young’s 1960 film of the same name; the original is often cited as an example of the ‘Golden Age’ of Korean Cinema and was hailed as ‘an utterly unpredictable work’ by Cahiers du cinéma editor-in-chief Jean-Michel Frodon in 2003, leading some critics to question the necessity of this new version.

This plot is essentially the same as that of the 1960 film with the titular housemaid (Jeon Do-yeon) being a divorcee hired by the elderly housekeeper (Yoon Yeo-jeong) of an upper-middle-class family that consists of a busy businessman (Lee Jeong-jae), his pregnant wife (Seo Woo), and their young daughter (Ahn Seo-hyeon). The master of the house takes advantage of his new employee, but the family becomes aware of the affair when the housemaid becomes pregnant and their employee is forced to have an abortion. As the housemaid’s mental state becomes increasingly unbalanced, revenge and retribution ensue. However, the material has been updated by Im to reflect the effect of the accelerated East Asian economy on South Korean society; the director emphasises the social divide between the housemaid and her employers, while the servant is manipulated by the master and victimised by the other family members before trying to turn the tables. Social commentary aside, The Housemaid also succeeds as a suspenseful thriller, with Im’s aesthetic approach making the most of the sumptuous set design, while Jeon’s emphatic performance effectively anchors the potentially melodramatic premise. Reviewing the film for Screen Daily, Lee Marshall stated that, ‘the rhythms are just too measured, the crane shots, overhead shots and set pieces all a little too studied,’ but indulging in such self-conscious stylisation enables Im to achieve a heightened atmosphere in which his critique of class divisions thrives amid the narrative machinations. As such, Im’s foray into the thriller genre should delight devotees of Korean Cinema, while serving as an entry point for those looking to explore new cinematic territory through the London Korean Film Festival.