After the capitulation of the Empire of Japan on 15 August 1945, Private Mizushima (Shoji Yasui) does not join the rest of his former unit in a British prisoner-of-war-camp in the Burmese countryside but becomes a Buddhist monk. The story of the young soldier who decides to stay in Burma after the war in order to give proper burials to the remains of dead Japanese soldiers is an adaptation of the eponymous children’s book by Michio Takeyama. The film evokes the brutality of war in a few of its images, including just one combat scene and numerous shots of dead bodies and human remains, adding a grim element of realism to the book, which was aimed at a young readership. The film’s general tone is nevertheless one of hope and reconciliation, and thus differs greatly from the horrors of war depicted in Ichikawa’s later Fires on the Plain (Nobi, Japan, 1959).

The Burmese Harp (Biruma no tategoto, Japan, 1956) is a tale of atonement, an atonement expressed from a very Japanese viewpoint. Mizushima is traumatized by the fate of his fellow countrymen who were killed in combat or succumbed to disease and exhaustion during the retreat of the Imperial Army. His feelings do not extend to the Burmese or to the British soldiers killed during “The Burma Campaign”, and the many thousands of Southeast Asian forced labourers and allied prisoners of war who died while working on the construction of the Burma Railway (also known as the Death Railway) are obviously not the film’s topic. The urns containing the ashes of British soldiers are properly arranged in a repository, and it is Mizushima’s commanding officer, Inoue (Rentaro Mikuni), who has been ordered to prepare them for the journey to England. In contrast to this, the bodies of dead Japanese are left to rot in the countryside. While trying to rejoin his unit, from which he was separated when sent on some special mission, Mizushima comes across piles of corpses. 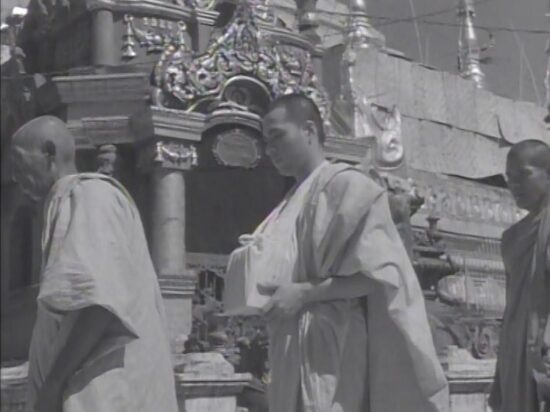 When he enters the precincts of a temple together with other Buddhist monks, he is carrying a small box in the distinctively Japanese manner adopted by many Japanese soldiers who brought back the ashes of their comrades – the wooden box wrapped in white cloth with the bundle of cloth fastened around their necks. Later, Mizushima secretly puts the box in the temple’s repository. However, the intention in the film is not to accuse the allied victors of some kind of unjust treatment or of revenge on the Japanese dead. This becomes clear in a different sequence, when Mizushima observes the funeral of one of the Japanese prisoners of war, the nuns of the hospital singing a funeral song for this unknown Japanese soldier, whose grave is even marked by a memorial stone slab.

Music plays a key role in the film’s attempt to transcend national boundaries. Inoue, a conservatoire graduate, has formed a choir from the men of his unit. In the first sequences, set before the end of the war, the soldiers sing to lift their spirits. At one point, when they are surrounded by British troops, they prepare to attack with their artillery but sing as a diversionary tactic. Not only does their plan work but the British soldiers respond by singing “Home Sweet Home!”. Music thus creates a bond between enemies, and the encounter does not develop into bloodshed but ends peacefully for Inoue – on being informed of his country’s capitulation a few days earlier, he surrenders.

This sequence suggests that although they are fighting in a war, the soldiers on both sides are human beings who have similar feelings, one of these feelings being their yearning for the comfort of home. Mizushima plays “Hanyo no yado”, the Japanese version of “Home Sweet Home!”, on his Burmese harp, an arched harp called a saung in Burmese. Later in the film, this tune becomes a way of identifying a harp player as Mizushima, whose comrades thought him dead. 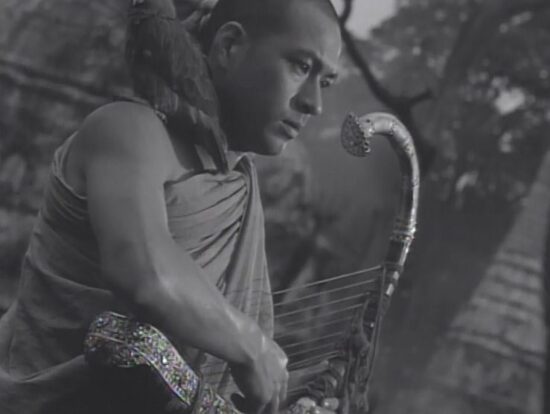 From the very beginning, Mizushima is associated with the harp, which he has learned to play with virtuoso proficiency. After becoming a Buddhist monk, Mizushima scarcely ever speaks, and he expresses himself through music. While the other soldiers are looking for the strange monk, thinking  that it could be Mizushima, he hides inside a huge statue of Buddha and starts playing “Hanyo no yado” on his harp as a sign that he is still alive. However, he remains invisible to the soldiers, who are unable to identify his hiding place, from which he watches them with tears in his eyes.

The Burmese Harp does not show emaciated Japanese soldiers being beaten by their superiors as do many other Japanese war films, including Listen to the Voices of the Sea (Nihon senbotsu gakusei shuki: kike wadatsume no koe, 1950, Hideo Sekigawa), Fires on the Plain or Masaki Kobayashi’s monumental The Human Condition (Ningen no joken, 1959-1961). Life in the prison camp does not seem too harsh either. However, one sequence shows a group of Japanese soldiers who continue fighting although the war has officially ended and are then killed by the allied forces. Despite such moments of graphic violence, the film preserves some of the fairy-tale atmosphere appropriate to the children’s book on which it is based. There is the almost miraculous discovery of an astoundingly big ruby near the spot where Mizushima stumbled upon the bodies of a large number of dead Japanese soldiers. For one of the Burmese fishermen who help Mizushima to bury the corpses, this jewel is the incarnation of the soul of a dead person and for Mizushima it symbolizes the dead Japanese soldiers. The box he has left at the repository does not contain ashes but the ruby.

Ichikawa’s film deals with overcoming an emotional trauma. Mizushima steals the robe of the Buddhist monk who found him unconscious after the Japanese unit that he could not convince to surrender had been eliminated by British artillery. He then shaves his head in the water of a river. The robe is not just a disguise but is the outward sign of an inner transformation, a change that is underlined by being associated with water, a symbol of purification and rebirth. However, it is the discovery of the many dead bodies of his compatriots that transforms the Japanese soldier into a humble monk. Mizushima is consecrated by the monk whose robe he has stolen, having decided to stay in Burma and dedicate the rest of his life to the Japanese war victims so that their souls can rest in peace. 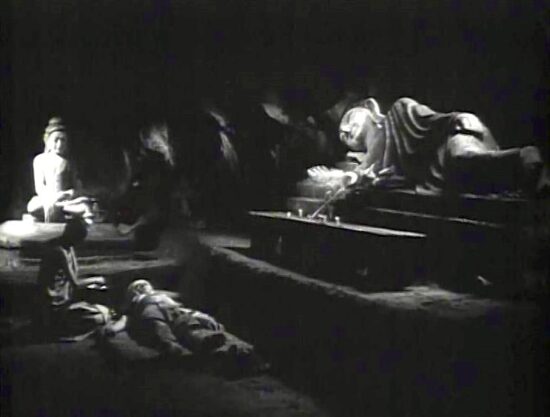 Right from the beginning of the film, Mizushima is set apart from his comrades by his association with Burma. The film presents the Burmese countryside as an exotic place, with the other Japanese soldiers treating its inhabitants in a friendly way but not without a degree of contempt. Mizushima not only plays the saung but in one scene wears a paso, an ankle-length wraparound skirt, and he also looks like a Burmese, as one of the soldiers says. The Burmese monk looks after the wounded Mizushima in a cave under a huge statue of Buddha, the cave almost functioning like a womb in which the soldier is reborn under the supervision of Buddha, who shows him the way to enlightenment. According to Buddhist teaching, this cannot be achieved without suffering, and Mizushima resists his strong desire to return to his country and his family, choosing instead the stony path of a life in loneliness and poverty.

As a monk, Mizushima is visually distinguished from his former friends and comrades. In the prison camp, they are filmed as a single entity staring at Mizushima from behind the barbed wire, and when in a different scene the soldiers stop to rest near a huge statue of Buddha, Mizushima is hiding inside the wooden statue. His decision to change his life course is that of an individual shouldering social responsibility. 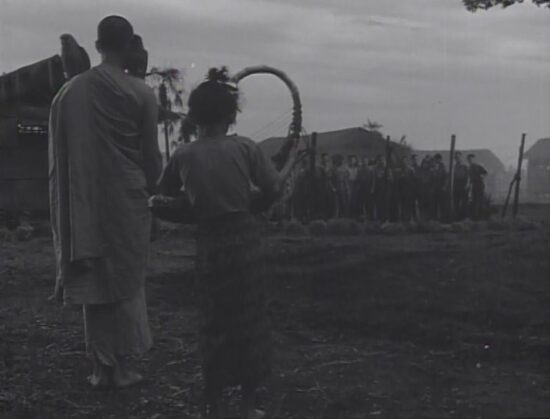 General shots of a human figure in the empty landscape of mountains and the jungle express the majesty of nature and the insignificance of human beings. The first shot in the film is of an arid wasteland, and the final shot shows Mizushima, a tiny human figure, in the same hostile landscape and walking into the background. The sentence “The soil of Burma is red, so are its rocks” is superimposed on both shots. This is not only a reminder of the country’s geology – in a film shot in black-and-white – but could equally well refer to the soil soaked with the blood of the many lives lost in this Southeast Asian country during World War II. Mizushima’s presence in the film’s final image suggests the importance of what he has done as a person who cannot change the world, as he explains in a letter to Inoue and his former comrades, but who can help to alleviate suffering.

Ichikawa’s film, avoiding any reference to Japanese war crimes as a topic too sensitive to address in 1956, deals with the concern of many Japanese families about the fate of their sons who lost their lives on the numerous battlefields of World War II. The Burmese Harp is a plea for peace and reconciliation at a time when memories of the war were still poignantly alive and the spectre of a new nuclear war very real. The film’s main theme, written by Akira Ifukube, recalls his famous soundtrack for Godzilla (Gojira, Japan, 1954, Ishiro Honda), a film connecting the horror of the atomic bombings with the nuclear threat in the 1950s.

Frequent shots of stupas and other visual motifs such as the full moon – a symbol of awakening – challenge a one-sided and purely Japanese understanding of the imagery. Mizushima’s letter, in which he explains his motivation, is read out to the other soldiers by Inoue when they are on the ship on their way back to Japan. While the letter is being read, the camera shows the wide open sea, another universal symbol and one that links The Burmese Harp with themes of birth and rebirth, of hope and desire rather than merely national concerns.