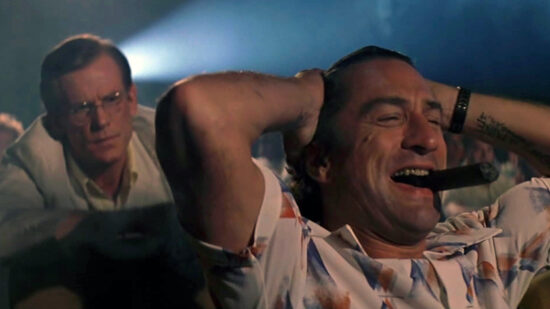 This quarantine provided the time to finally view Martin Scorsese’s remake of Cape Fear (1991), originally shot by director J. Lee Thompson (1962) and based on John D. MacDonald’s The Executioners (1957). The innocent 90s-child in me can’t help but happily recall the iconic Simpsons spoof, “Cape Feare,” with Sideshow Bob tied under the family’s vehicle while they sing, joyfully, up above.

Right off the bat, Scorsese adds his style to the film, with a Hitchcockian feel. Fun fact: Steven Spielberg was originally chosen to direct the film, which would have added too much of a feel-good, homely vibe all over. Thankfully, the directors did a switcheroo and we have what is now in existence today: a crazed ex-rapist convict, Max Cady (Robert De Niro), causing havoc and pain upon his old lawyer (who wrongfully defended him 14 years ago), and his supple wife (Jessica Lange) and daughter (Juliette Lewis).

De Niro’s dedication to this film is shown through his ripped body, obnoxious banter and huge, phallic-like, cigar; unbeknownst to him, this will become his demise (along with trying to play God). His character foils nicely against his foe, Sam Bowden (Nick Nolte), the bumbling, “All-American”, promiscuous, oaf-like fool. The movie is a product of its time, and watching it in 2021 puts scenes into current perspective.

Consider the moment with Sam Bowden and undercover detective Claude Kersek (Joe Don Baker) having a heart-to-heart on trying to off Cady. Kersek comforts Bowden: “I want you to savor that fear. The South evolved in fear; fear of the Indian, fear of the slave, fear of the damn Union. The South has a fine tradition of savoring fear.” Perhaps the best line, it makes me think of the country’s desire to build power over others. One can’t help but acknowledge the film’s depictions of American flags, Confederate flags, and white-male chauvinism. The movie ends with the zealously climactic shot of two men getting down to their homosapien roots: stoning each other to death.

The last scene is a single shot of Danielle Bowden (Lewis), narrating what the future held for her and her family: their fear of the past and of the truth. Can a wife really forget the promiscuity of her husband (she puts on lipstick to cover over the sadness and reality creeping in)? Can a grown man forget how he went against his beliefs and wrongfully defended someone?

It seems that Americans are afraid of seeing personal faults, faults of family, or ancestors; they all want to forget the past evils, but how can that be? The moral of the story being the importance of understanding the past to better the present. While there’s no way of denying De Niro and Scorsese’s dynamic-duo remake, I can’t help but wonder: could this film have been done with some more…color?