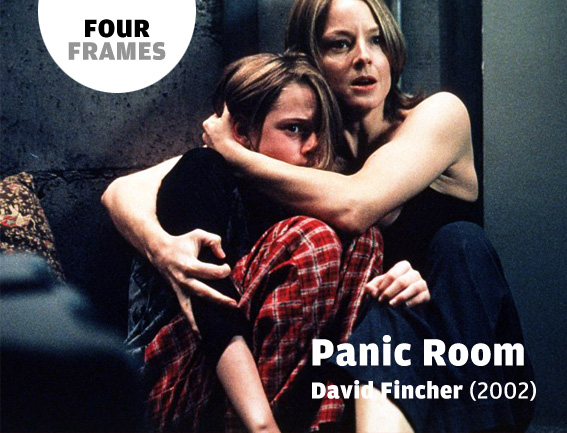 It’s no real surprise to learn that David Fincher’s least favourite of his films are Panic Room and Alien 3. Both are films with powerful female leads where for once his masculinity is undermined by complex femininity. Pretty much the first words uttered here are by an arrogant male real estate agent, standing on the steps above a younger female agent and her female clients stating ‘one day you will learn that the world does not stop and start at your convenience’.

Panic Room becomes an interesting film for srutiny when viewed as an allegory for women in Hollywood, and potentially as an allegory for the life of its star, Jodie Foster. This short piece is part of much deeper planned piece of work on this embryonic idea.

The two key shots in the film are powerful close ups. Both come towards the end of the film and feel out of place in such a testosterone driven thriller. In both instances Foster’s character suffers a horrific ordeal and reacts in jarring ways. Firstly, as she is about to have her head caved in by Dwight Yoakam’s sledgehammer she is not only not scared, but carries a face of serene calm.

It’s more than an acceptance of fate; it feels like a Zen acceptance of her womanhood and the threat she inherently poses males. She is saved from the gruesome bludgeoning by Forest Whitaker’s character who then attempts to flee, only to have his escape thwarted by a swarming SWAT team. As Foster’s character hears her saviour’s capture and looks at her badly beaten ex-husband (Patrick Bauchau) who has been brutalised, she again has a strange look on her face. Not one of sadness, or fear, but of guilt.

She takes responsibility through her gender, for the hurt that the good men around her have suffered, men at whose hands she has suffered.

These responses are most unusual in a genre where women are generally rendered as plot banshees, but then Foster has never been content to take the slim pickings Hollywood doles out to actresses. When Foster’s life and long career are considered as a means of reading the film, her role as a Mother protecting a vulnerable daughter from male invasion becomes fascinating. It’s complicated by the maternal impulse, with Foster’s character frequently risking herself for her offspring only to warn and scold her child for thinking of doing similar.

Foster recently came out in defence of another former child actress, facing scrutiny from the world’s media. The actress? Kristen Stewart, Foster’s asthmatic daughter in Panic Room, who she smothers almost unbearably.

Foster suffered a famously tough family life and grew up through the glare of film and paparazzi cameras with roles in big films and later was subject to constant questioning over the progeny of her real life offspring. She has not only weathered the celebrity storm but managed to retain a dignified, glorious career. Sometimes however, the young have to learn from their own mistakes, no matter the protection and warnings offered.