Bryan Forbes’s Séance on a Wet Afternoon (UK, 1964) starts with mystery-filled images of a séance; Kiyoshi Kurosawa’s Séance (Korei, Japan, 2000, produced by Kansai Television) begins with an academic debate on parapsychological phenomena between a professor and a student. Both films are inspired by Mark McShane’s novel Séance on a Wet Afternoon (1961). Forbes’s film is a psychological thriller with no horror elements; Kurosawa’s film creates strong moments of suspense, but also includes many elements of the horror genre. Myra Savage (Kim Stanley) and Junko Sato (Jun Fubuki), the female protagonists in the two films, both work as a medium, and each is shown during a séance at the beginning of the film. 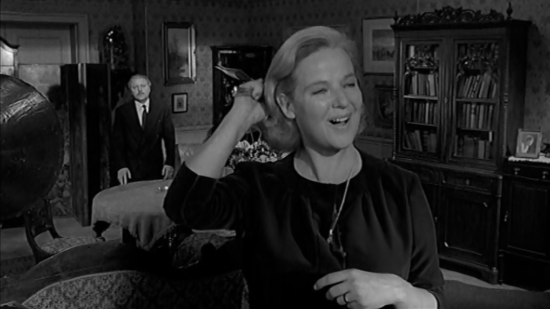 Forbes’s Séance on a Wet Afternoon is almost a chamber drama, with the gloomy, overloaded house of Myra and Billy Savage as the main setting. The lighting and black-and-white photography create a bleak, nightmarish atmosphere appropriate for the exploration of these two lost souls. Myra, unable to overcome the death of her child at birth, is an unstable woman whose mood oscillates between joy, despair and aggressiveness. Her husband Billy (Richard Attenborough) is depicted as a weak but sympathetic man whose sole purpose in life is to try to make his wife happy. He is prepared to do anything for her, including the murder of a child.

Forbes’s film is a character study of a couple bound together by a tragic loss. Myra has created an imaginary past in which their stillborn son Arthur was alive, and she claims contact with the realm of the dead through him. The subtle black-and-white photography, highlighting the oppressive atmosphere in their house, is a visual means to explore inner tension. Frequent close-ups underline the priority given to human beings and their psychological states. Like the protagonists in the British film, Junko and Koji (Koji Yakusho) also live very much on their own. However, they share moments of happiness and, apart from Junko’s work as a medium, lead very normal lives. This is revealed in a number of everyday situations, including scenes which show Koji at work in his job as a sound effects artist for film and television.

No explanation is given for Junko’s visions, nor is any trauma involved, but Kurosawa emphasizes how much these visions influence her life. She suffers as a result of her ability to foresee death, and consequently has to endure social rejection – for example, the university professor does not dare to involve the medium in an experiment aiding the police in a homicide investigation. Junko’s attempt to hold down an ordinary job as a waitress in a restaurant fails because of her visions, which repeatedly haunt her.

The protagonists in both films try to escape from their dull existence, longing for recognition and a better life. Myra and her husband kidnap the daughter of a young rich couple in order to create an opportunity for Myra, as a medium, to solve the crime by providing clues to the whereabouts of the missing girl. Junko has a similar idea when she and her husband accidentally become involved in a kidnapping. A little girl trying to escape from her kidnapper hides in Koji’s equipment case, which Koji unknowingly takes back home and leaves in the garage, discovering the child the day after.

In both films, the girls die. In Séance on a Wet Afternoon, Myra’s instability makes it impossible for her to continue with her plan and she asks Billy to kill the girl, who has seen their faces. In the Japanese film, Koji tries to stop the girl from crying and finds her dead a little later. Unlike Myra and Bill, Koji and his wife are victims of strange coincidences, of some fate which they try in vain to gain control over. The idea that they are prisoners of their destiny is underlined by the frequent use of frames behind which the two protagonists appear, as if behind bars. 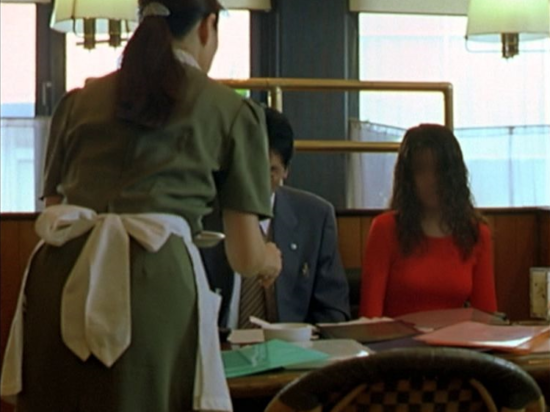 Death is a central theme in both Séance on a Wet Afternoon and Séance. It is her own dead child which provides the link between Myra and the otherworld. Junko can foresee death, as in the sequence in the restaurant in which she sees a woman dressed in red and with a blurred face sitting next to one of the guests in the restaurant. Such visions of death challenge the appearance of normality, and both Junko and Koji have visions that feature the dead girl. There is no use of special effects in Séance, no mysterious halo around the head of the little girl’s ghost, which is filmed in an entirely realistic way. In one scene, the face and clothes of the girl are soiled, a reference to her grave in the woods where Junko and Koji have buried it. 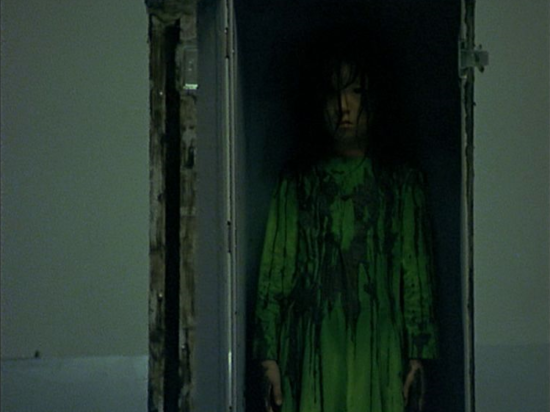 The supernatural is expressed through the appearance of ghostly figures and eerie music which, always very discreet, reinforces the moments of suspense and the strangeness which permeates Kurosawa’s film. The séance in which Junko tries to communicate with the dead husband of one of her clients alternates with shots of objects in the house which move slightly, as if shaken by some unknown force, and the shot of Koji exhaling a thin cloud when he awakes after a nap in a nearby room is a further indicator of some unexplained presence in the house.

The elements of the horror genre in Séance are expressions of inner torment. Kurosawa does not create horrifying moments that make the viewer scream and jump out of his or her seat. Instead, he suggests the presence of the uncanny through elegant camera moves and editing. In a series of shots, the changing lighting – from light to darkness and back again – and the framing of a door create suspense. But the viewer never sees what is behind the door, or indeed whether there is anything there at all.

Tension remains latent and does not give way to the spectacular. However, the ghost of the little girl haunts Junko and Koji, confronting them with their suppressed fears and guilt and their own dark side. Junko cannot escape from her condition, which is more like a curse, and she and her husband are constantly reminded of their evil deed and their social responsibility. Koji is brought face to face with his own double; its presence reveals his weakness, and the confrontation with his doppelgänger symbolizes an encounter with death. 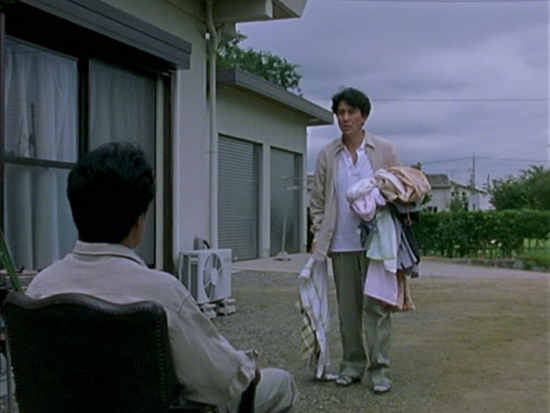 Forbes’s film, with its sublime lighting and many ingenious shots, such as the one in which Billy is framed by the remains of a Nissen hut, relies very much on dialogue. The theme of death is approached in conversations between husband and wife, revealing their traumatic past in a well-paced thriller that focuses on the kidnapping. Kiyoshi Kurosawa’s film, by contrast, is marked by long silences, by images of nature or of objects which interrupt the flow of the narrative, emphasizing ordinariness, the couple’s relationship and their daily routines. Horror invades the mundane everyday life of these two protagonists and turns it into hell.