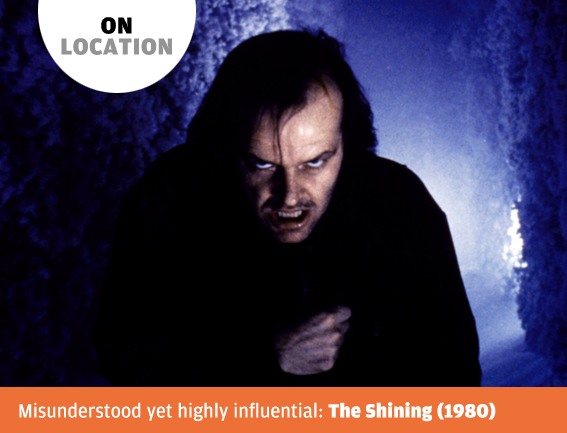 Thirty years have passed since Stanley Kubrick’s adaptation of the Stephen King novel first hit the box office, to a rather lukewarm reception from both critics and the horror author himself. King made no secret of his displeasure at several aspects of the film, famously stating: “The real problem is that Kubrick set out to make a horror picture with no apparent understanding of the genre.”
The author was particularly upset at Nicholson’s casting in the role of Jack Torrance, suggesting that the character was supposed to begin as a stable family man and turgidly descend into alcoholic paranoia and eventual madness. Nicholson’s reputation for playing precariously unbalanced characters conflicted with this vision, while Kubrick clearly paints Jack Torrance as a violent and volatile man long before he even sets foot inside the spooky interior of the Overlook.

While King’s qualms were apparently dismissed quite readily, the reviews that sniffed at The Shining‘s slow pace and disloyalty to the novel must have been a bitter pill for Kubrick’s crew, who had a gruelling time during production. The shoot was originally scheduled to take just 17 weeks, but the director’s obsessive pursuit of the perfect take and his insistence that the script be shot in order extended filming to almost an entire year. Accounts of just how bad things were seem to vary considerably, but it’s rumoured that Kubrick shot over a hundred feet of film for each foot eventually used. It’s hardly any wonder then that The Shining holds a Guinness World Record for the greatest number of takes in a single dialogue scene -Shelley Duvall apparently had to back up those stairs while swinging her baseball bat a mind-boggling 127 times in all. 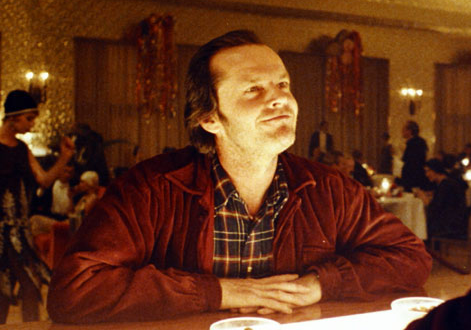 The endless takes and reshoots resulted in quite a few continuity errors in the finished product. In a scene in which Jack argues with Wendy, he tears the paper from his typewriter – yet a moment later, a fresh sheet is neatly in position. In other scenes, the typewriter unexpectedly changes colour or doors mysteriously change position. Some internet theories suggest that these errors weren’t actually mistakes at all, but were deliberately inserted into the film as supernatural acts committed by the hotel. A rather rose-tinted view of Kubrick’s work, but an interesting source of debate all the same.

Not even the script was safe from Kubrick’s eye for perfection. Nicholson admitted in a behind-the-scenes documentary shot by the director’s daughter, Vivian, that he never even bothered reading his script because of the constant changes. “I quit using it,” he moans to the camera, his expression a mixture of exhaustion and capitulation. “I just take the ones they type up each day.” The rewrites were so regular that Kubrick printed each new version on a different colour of paper, to ensure that people were reading from the latest edition.

Nicholson may have been stretched by the shoot, each night collapsing into bed the moment he arrived home according to then-girlfriend Anjelica Huston, but his co-star Shelley Duvall had it a lot worse. Kubrick was determined to drive an emotional performance from her, and to do so he made her feel truly helpless on set. He pushed her so close to the edge that Duvall was ill for long periods and her hair even started to fall out through stress. The cast and crew were ordered not to show her any sympathy, while Kubrick regularly berated her for failing to deliver to his high expectations and wasting everyone’s time. Meanwhile, she was in such a constant state of hysteria that she apparently kept bottles of water with her at all times just to replenish the water she lost through crying!

“You always dislike the cause of pain,” Duvall said in Vivian Kubrick’s documentary. “You always resent it. So I resented Stanley at the time because he pushed me, and it hurt.” But looking back, she holds no grudges: “He taught me more than I’ve learned on all the other pictures I’ve done.” Nicholson was quick to praise Duvall’s performance in a later interview, in which he stated that her work in that film was “the toughest job that any actor that I’ve seen had.”

Although The Shining was unappreciated upon its original release, many critics including Roger Ebert have since backtracked and rightfully praised its foreboding atmosphere and sense of pervading menace. Kubrick’s masterpiece now adorns many ‘scariest film’ lists and the movie has done incredibly well in VHS and DVD sales. Perhaps the legendary director was just way ahead of his time, but at last The Shining has gathered the kudos it deserves and exorcised the ghosts of a laboured and emotional production.