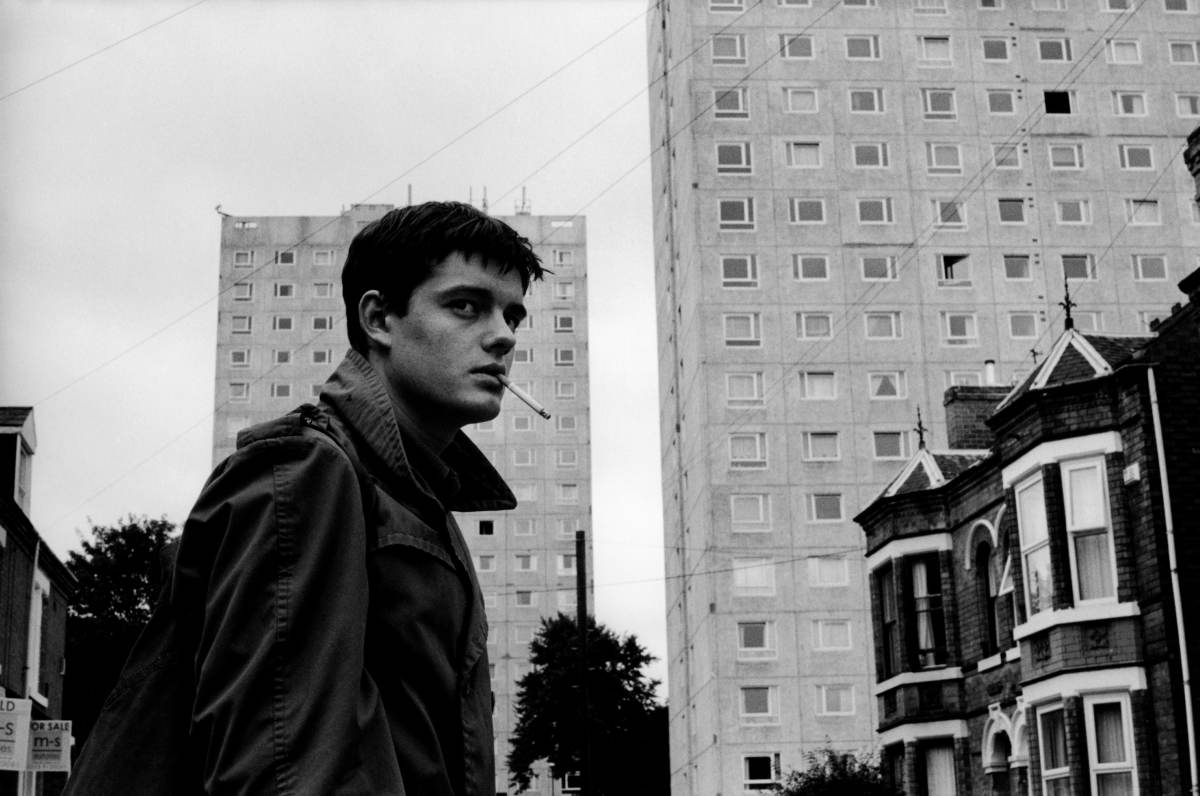 Joy Division was always slightly apart from other iconic Manchester bands: darker, sharper and alienated from the swagger and mischief. As a band they were also geographically slightly apart. They hailed from and remained, largely, in nearby Macclesfield throughout their brief period together. As a young man Anton Corbijn created some of the most iconic black and white photographs of the seminal band through his stunning use of monochrome cinematography. His 2007 film of their complex, tragic front man Ian Curtis captures the same elegance and power as those famous images.

Corbijn understands Curtis’ various tragedies and creates a visual tapestry of the man that mournfully blends him in with his surroundings. He and the rest of his band in their austere, Germanic outfits are almost invisible against the dark grey tower blocks, terraces and Working Men’s Clubs that litter the locale. Their cigarette smoke joins seamlessly with the smoke that billows from industrial stacks that peek into the edge of the frame. Even when they are away from Macclesfield, they are indivisible from their surroundings. At one point, during a recording session in London, Curtis almost evaporates into the black vocal booth’s sound proofing, leaving just that powerful, ocean deep voice levitating in the darkness.

Macclesfield is a central character in the film. Whilst on tour Curtis tells a Belgian journalist called Annik – whom he falls in love with, breaking his wife’s heart – that he has always wanted to escape the small industrial town of his birth. Ian also tells Annik that his wife Debbie loves Macclesfield.

The outset of the film sees Curtis as enigmatic and magnetic, reveling in the self-actualisation excesses afforded by Glam Rock. But as Punk explodes and his epilepsy takes hold, he retreats from eye-liner and his siblings’ fur coat into dark shirts, long raincoats and stiff cotton, slowly becoming absorbed into the landscape he so desperately wants to escape. It feels almost as though he can’t see the connection he has to this place. His bandmates are more at ease, their immersion in the landscape more peaceful, more accepting. They wear their origins as a badge of pride, something Curtis never seems able to do.

The film ends with an elegiac, sad irony. Following his suicide Curtis’ wish to escape is granted but as his ashes descend to the sky they disintegrate into the Macclesfield atmosphere, taking him deeper into the substance of the place more than ever before.

One of the band’s last great songs, Atmosphere, delicately plays over the grief of those he has left behind, none more grief stricken than his wife Debbie who loves this nondescript, grey place that somehow gave birth to one of the most original British bands of the twentieth century.