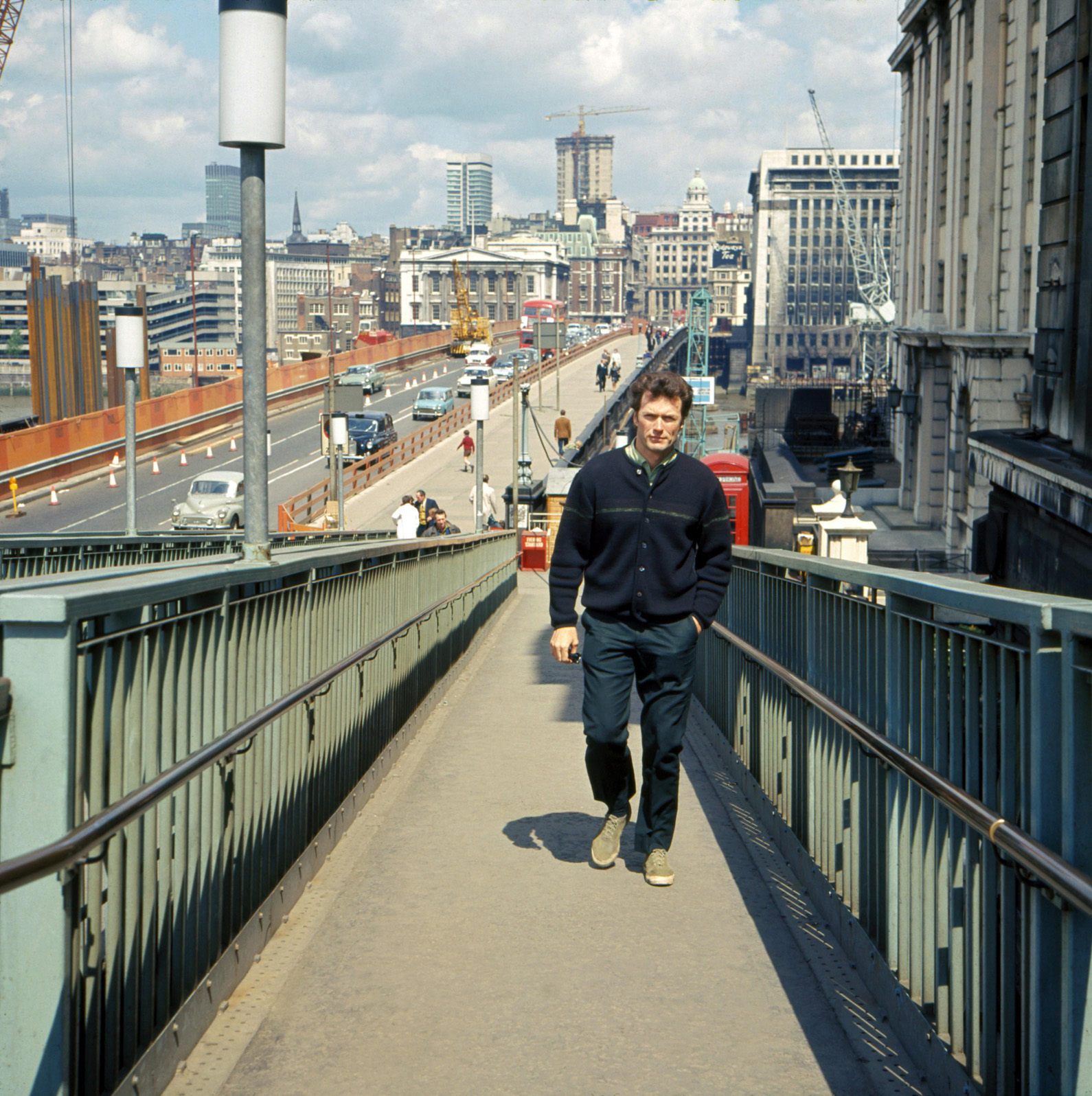 To coincide with the London Film Festal 2014 The Big Picture is casting its eye back through London’s rich cinematic history, to explore some the films that have been set and shot in this iconic city.

The following films have been selected from World Film Locations: London (edited by Neil Mitchell). 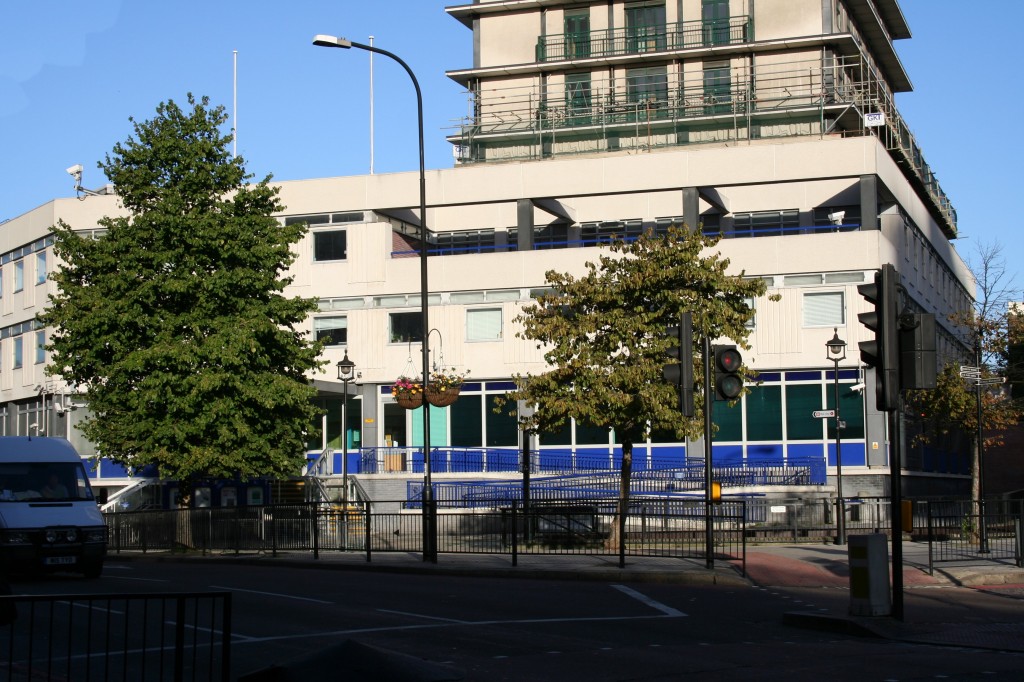 An early scene in Basil Deardon’s now landmark film has rookie cop Andy Mitchell doing his first night shift on the beat out of Paddington Green police station. The noirish filming of the London streets (rain soaked, with low key lighting) suggest the risk of urban crime. However, this is soon negated by the avuncular policemen patrolling the streets – observing the stars, indulgently busting a young couple kissing, and walking quietly so as not to wake sleeping street hawkers. Andy soon falls in with his future mentor, PC George Dixon (Stanley Baxter), who gives him some tips on surviving the London night shift. The trick is to find something to occupy your mind, and Dixon composes amusing songs about the force:

They’ve cracked a safe at number 8 and robbed a local bank.
Kids have smashed the fire alarm just their jolly prank,
You’ve found a headless torso and its foul play you suspect (and here’s the funny bit),
But when the sergeant comes along you must tell him ‘all correct!’

This sequence, and this song in particular, encapsulates the London that Deardon imagines. It oscillates between the noir and the idyllic, between jolly pranks and headless torsos, between an equilibrium represented by the ‘blue lamp’ of the police and the dangerous social elements of postwar London’s underworld of spivs and petty criminals. – Lindsay Steenberg 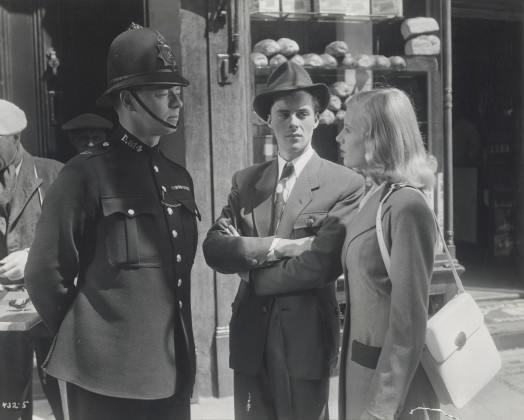 The Man Who Knew Too Much (Alfred Hitchcock, 1956) 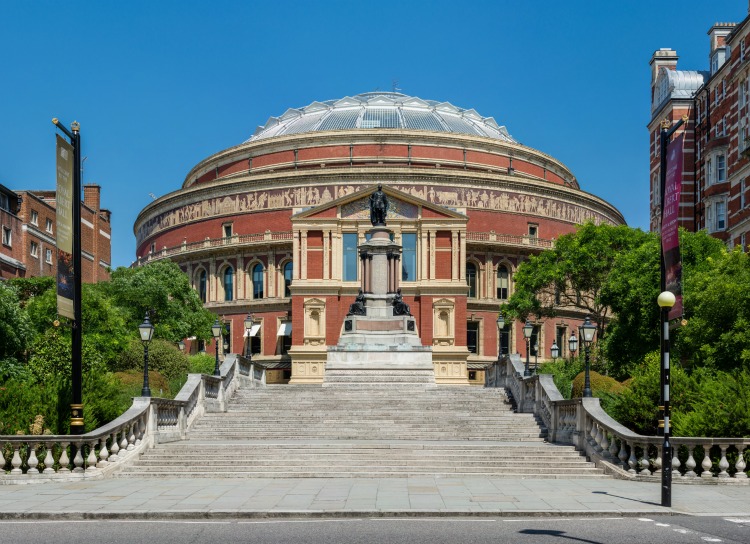 Alfred Hitchcock’s remake of his own 1934 film finds Dr Benjamin McKenna (James Stewart) and his wife Josephine (Doris Day) flying to London after their son is kidnapped whilst on holiday in Morocco. The couple become entangled in a political assassination as they attempt against all the odds to retrieve their captured son. After a wild goose chase around the stark and sinister looking terraced houses of Brixton and Camden Town, the couple find themselves amongst the highbrow audience at a classical concert in the esteemed Royal Albert Hall. Hitchcock uses his cinematic knowledge of creating tension through an awareness of space coupled with the impact of music to incredible effect. In his original The Man Who Knew Too Much (1934) Hitchcock probably used the Royal Albert as it was the only venue of this size that held such concerts. However, by 1956 other concert halls had been built (such as the Festival Hall on the Southbank). Perhaps Hitchcock remained at the Albert Hall in honour of his original, but it is more likely that he realized the potential of the hall itself to amplify the tension of the scene. The imminent assassination of the foreign ambassador during the concert performance given by the film’s composer Bernard Herrmann (playing himself) is visually heightened by the hall. Its circular structure, multiple private boxes and long curtains create hiding places, invoking an uncertainty and mystery. Hitchcock masterfully creates tension and fear in what is an otherwise large, open, and (in this scene) crowded space. – Toby King 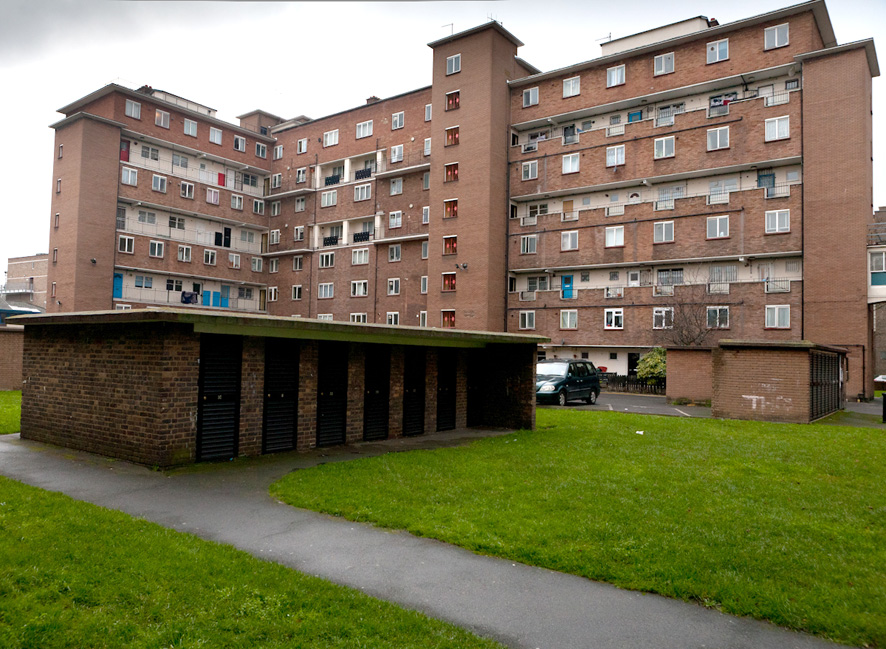 Sparrows Can’t Sing is renowned theatre director Joan Littlewood’s sole film directorial credit. Originally written for the stage and co-written for the screen with Littlewood by Stephen Lewis (best known as Blakey from the 1970s sitcom On the Buses) this comedy drama is a snapshot of Cockney life in the early 1960s. Shot on location around Limehouse, Stepney and The Isle of Dogs, the film’s chirpy but volatile central character, Charlie (Tony Booth), a sailor returning home after a long voyage, finds his childhood home demolished as part of a housing regeneration programme and his marriage to infidelitous ‘cockney sparrow’ Maggie (Barbara Windsor) under threat. Both Charlie’s agitated insecurity and the altered face of the East End he remembers is illustrated in a scene that cuts between the newly built high rise flats of the Clichy Estate and the familiar old comforts of a ‘cockney knees up’. Maggie, now sharing one of the new flats with her lover, sets off to meet Charlie, who is anxiously waiting for her in the local pub where the regulars strike up an impromptu sing-song. This much mythologized cultural event, with working class locals dancing and singing around ‘the old Joanna’, and where the booze, gossip and banter flows freely, is sharply contrasted with the quiet, sterile and officious environment of the modern council-owned flat complex. In keeping with urban regeneration and the changing population demographics in all cities London’s East End is now a much altered place and the traditional knees up a clichéd memory. – Neil Mitchell 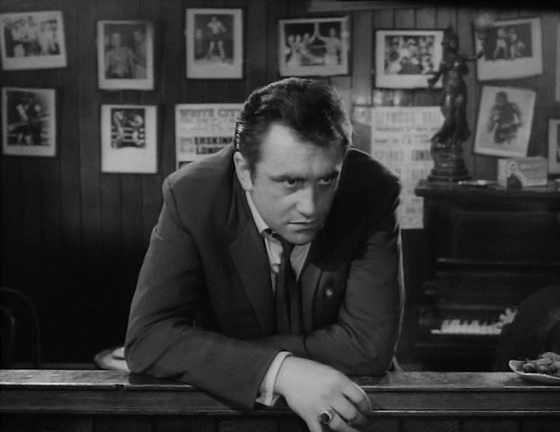 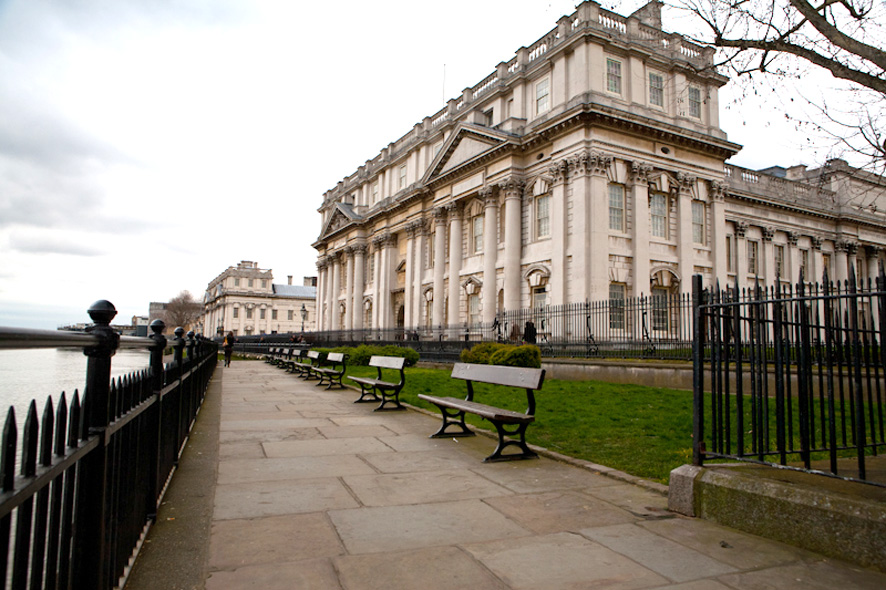 Del (Del Walker) hangs around East London getting involved in petty crime and street fights. He begins a romance with 15-year-old Irene (Anne Gooding), much to the chagrin of their parents, and the couple grow frustrated by their lack of privacy or freedom. They attempt eloping to the countryside but this plan fails and when Irene’s mother reports her daughter’s absence to the police, the couple find themselves on the run from the law. Shot predominantly around Stratford with a cast entirely of non-professionals, Bronco Bullfrog‘s depiction of teenage frustration still seems as earnest and affecting today as it did in 1970. Borne out of improvisations with the actors, Barney Platts-Mills fashioned a screenplay that depicts characters trapped by their working-class backgrounds and harsh urban environment. The back streets, tower blocks and derelict buildings used throughout the film reflect the oppressive nature of the city. Only during Del and Irene’s attempt to leave London does the scenery open out to the wide spaces of the surrounding countryside. In the final sequence of Bronco Bullfrog both of these contrasting attributes are addressed and also reflect the characters’ situation: the young couple flee from a scuffle with police and find themselves on a River Thames pathway which leads to a dead-end (at the Lovell’s Wharf docker’s yard in Greenwich). They are on the run yet are freed of their parents’ control and in a further visual juxtaposition are both trapped by their urban surroundings whilst alongside them is the vast openness of the river. – Christopher O’Neill 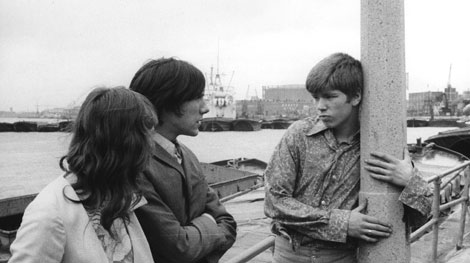 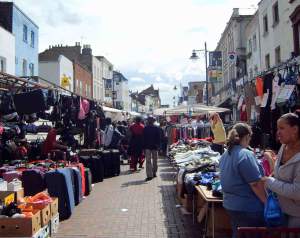 Blue (Brinsley Forde) is part of a sound system who finds that, during the days leading up to a sound clash competition, his life begins to unravel: he’s fired from his job, loses his girlfriend, roughed-up and arrested by police, and the group’s equipment is vandalized. All of this creates a feeling in Blue of increasing alienation from the society around him that soon erupts into violence. In its depiction of an ethnic minority that, in the late 1970s, had little significant presence in British cinema, Babylon is a passionate advocate for the troubles that faced second generation black youths. One sequence transforms the streets and alleyways of East London into a terrifying nocturnal hunting ground for the police and their suspects. Blue strolls through Deptford High Street at night, illuminated only by street lamps and the shop windows that he passes, and notices a car following him. He flees and is chased by a group of unidentified men, but Blue cuts through some sparsely-lit backstreets and loses them. The next morning they eventually find him, reveal themselves to be policemen who proceed to beat him up (‘What you run off for then, hey?’), and arrest Blue on an unwarranted charge. This incident was inspired by the Sus law that empowered police officers to arrest anybody they suspected would commit a crime without evidence. Many young black men were victimized by this law and it was the main cause behind the 1981 Brixton Riots (in response the law was abolished later that same year). – Christopher O’Neill 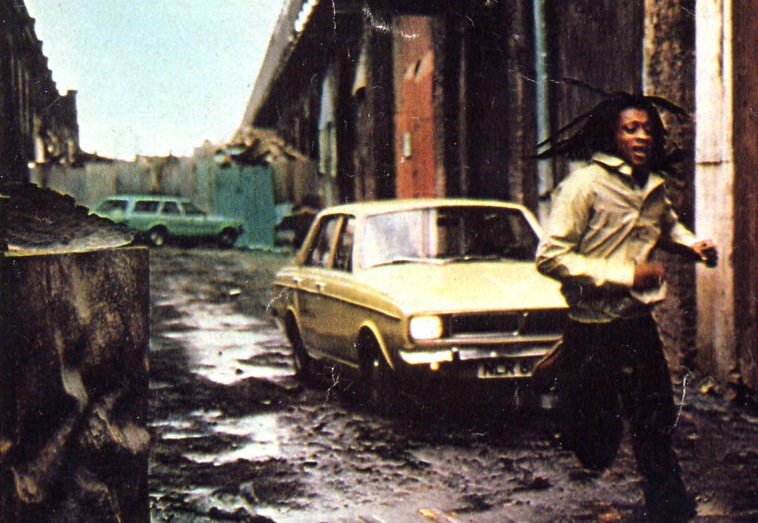