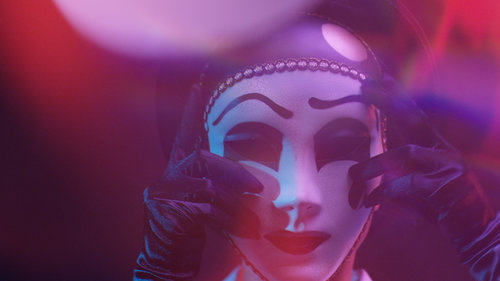 The psychosexual thriller has survived many iterations, from the highbrow (Eyes Wide Shut, 1999), to the gloriously over-the-top (Dressed to Kill, 1980), to the painfully dated (Jade, 1995).

Hope Raymond stars as Christian (her titular moniker a clever androgynization of the name), who hosts a sex club at her isolated, beachfront home. Viewers are introduced to this enigmatic world – one in which attendees are promptly stamped on the neck with a letter and number upon entry – via Stella (a scene-stealing Eliza Boivin), the latest addition to the group of wealthy regulars. Why do Christian and her business partner, Danny (Brian Smick), throw such elaborate soirees? How does Stella, who holds a key to Christian’s troubled past, fit into the equation? These and other questions propel the narrative, which is further complicated when we learn where Christian has stashed a hidden camera.

With a runtime exceeding two hours, X overstays its welcome by about twenty minutes but is commendable for Ramsey’s commitment to representation, be it racial or sexual. While it flirts with camp, the film is never mean-spirited or outright nasty. Ramsey and co-screenwriter Hannah Katherine Jost respect – rather than exploit – their characters’ diverse preferences and fetishes without losing their sense of humor (there’s a great throwaway line about the difficulties of indulging your wildest fantasies under the constraints of the secret society’s dress code).

Despite some obvious budgetary limitations (it can be rough-edged where it clearly intends to be glossy) and uneven pacing, the film works best when it swings for the fences, as it does during a black-and-white musical interlude reminiscent – quite unexpectedly – of Guy Maddin, a breathless split-screen montage that juxtaposes Christian’s secret life with her banal daytime activities, or even its baroque opening credits sequence. Such moments point to the allure (as well as to the danger) of pretending to be someone we know we aren’t. Donning a mask may help us temporarily forget our insecurities, but it certainly won’t erase them.