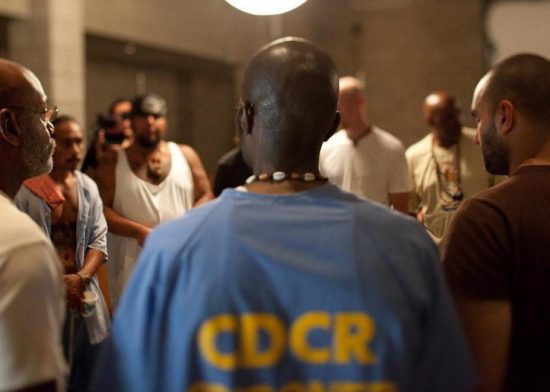 Folsom State Prison in California is home to “The Work”, a program that mixes both prisoners and members of the public together over the course of four days to take part in a group therapy session. There’s no “one size fits all” approach here. Every single person comes with an idea or goal, and the remarkable thing is, many achieve substantially more than they expected.

The offenders are not in for minor crimes. In the outside world, many of them would have openly admitted to murder, then wearing the act as a badge of honour. The rules of the streets all too often translate into the rules of the prison yard, but all of this is put aside for the incredibly intimate group therapy session.

From the large group of participants, the film hones in on three first-time visitors from the general public, who are immediately paired with two prisoners of their choosing. Once reformed as a larger group, the therapy starts. The process is simple: to let these men address their past and confront the range of emotions they have either failed to identify, or have kept closed away for so long. Forced to relive painful memories and open up in ways they never have before leaves the men vulnerable, and often unstable.

It’s widely acknowledged that traditionally, society demands that men conceal their emotions. And while not strictly enforced, many choose to enforce it on themselves. They have to provide, to be unemotional, to be “the strong one”. These expectations are magnified where the father figure is absent, or the individual comes from a background of poverty, or violence.

The prisoners have hard shells to crack. Their tough lives have dictated that they kill without remorse, commit often violent crimes without emotion, and avenge their friends without fear. Eventually, this inability to express manifests as anger, and as the group therapy evolves, we witness each person attempt to connect with a difficult past in order to begin the healing process.

The Work is a prime example of where less is more. It’s shot simply but effectively, with no talking heads, narration or separate interviews. The cameras remain close, but passive as they move through the tension unacknowledged.

For anyone with a keen interest in prison dynamics, masculinity, male psychology, and ideas of how a ‘hardened criminal’ should behave, then this documentary is a must-watch. It’s difficult not to be moved by what you hear and see within the confines of that single room.

The Work is in cinemas now, and will be released on DVD 27 November courtesy of Dogwoof