You may have met a man – quite young –
A brisk-eyed youth, and highly strung:
One whose desires
And inner fires
Moved him as wires …
-From “So Various,” Thomas Hardy (1840-1928) 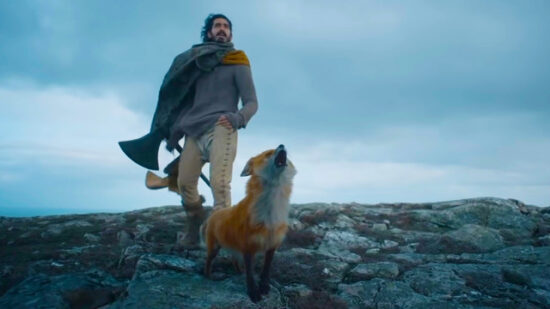 The role of Gawain in David Lowery’s The Green Knight (2021) offers Dev Patel the opportunity to display a round table smorgasbord of man’s “great” variety – impetuous, courageous, vulnerable. Chivalric and romantic, honourable … yet ordinary. Tempted, tested … and found wanting. But still standing? Patel (Slumdog Millionaire, Lion) intelligently, subtly and movingly achieves all that is asked as well as radiating a calm assurance and understated grace in an accomplished screen acting performance.

Lowery’s rich quest fantasy is a precious, earthen vault full of wonder, mystery, beauty and bewilderment. Dense symbolism, myth and marvel. The fall of empires, the march of ethereal and enigmatic giants, emerging then receding through the mists of time (further reading is recommended, particularly Simon Armitage’s translation of the original Sir Gawain And The Green Knight, a 14th Century Arthurian tale by “Anonymous”).

US writer-director-editor-producer Lowery is well served by his production designers and art department, championing creativity over any “money hose”. This is a bonafide epic, delivered on a relatively small budget. Sometimes, with one hand tied behind your back, a third eye is opened to see another way. Costumes glint with hints of ancient Egypt, robes ripple and envelop like those of pagan druids. Vertically mounted golden crowns represent halos, nodding to the New Hope of early Christianity. 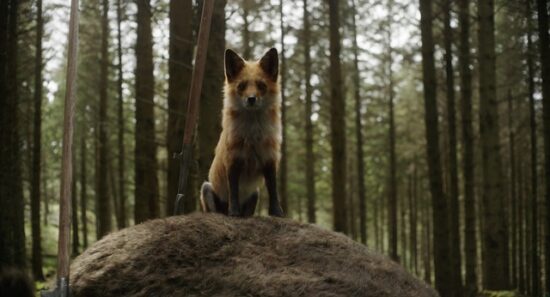 And then there’s the talking fox. Yes, a talking fox – no Robin Hood, nor the fantastic Mr. Clooney, or Lars von Trier’s harbinger of doom in Antichrist (2009), who warned: “Chaos Reigns” (for many, Nature IS Chaos). The fox – another superbly realised creation, part reality, part animation, part ginger-minger – accompanies Gawain on his travels, like Don Quixote’s Sancho Panza or Phileas Fogg’s Passepartout, but he is no master key, as our hero is met by recurring lockboxes and tricksy games.

And there may have crossed your path a lover,
In whose clear depths you could discover …

Guardian critic Charles Bramesco labelled The Green Knight “equal parts folk, prog rock and metal”, which is spot on. There are pastoral idylls, complex solo meanderings and some proper headbanging for your headspace. Bramesco was referring to the essence of the film, not the music itself, but regular Lowery collaborator Daniel Hart’s score contains its own wonderful variety of tones and moods. John Boorman cranked up the Wagner for his similarly visionary and extraordinary Excalibur (1981) and the two, Excalibur and The Green Knight, could play together as a fine “Ireland and Ardmore Studios” double bill – but then Excalibur could play as a double bill with almost anything, from any of the Mad Maxes to Apocalypse Now to Monty Python And The Holy Grail (Lowery has credited the Pythons’ film as one of his inspirations).

And you may have met one stiff and old,
If not in years; of manner cold;
Who seemed as stone,
And never had known
Of mirth or moan … 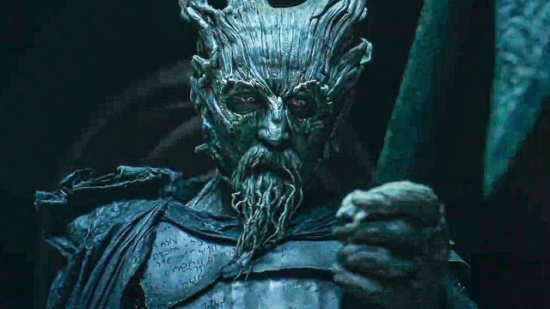 Does Lowery (Ain’t Them Bodies Saints, A Ghost Story) make changes to the original text? Of course – not least in the identity and motives of the titular challenger (Ralph Ineson), and in the character of Morgan le Fay. Movies do that, change things – no text is sacred, the author’s most coveted creativity sacrificed on the twin altars of economy and economical storytelling. It’s been going on for years! 1974 disaster movie The Towering Inferno, for instance, is based on two books, The Tower, by Richard Martin Stern, and The Glass Inferno, by Thomas N. Scortia and Frank M. Robinson. The resultant film, and a subsequent dream, it is said, helped inspire Roderick (The Detective) Thorp to write a 1979 novel titled Nothing Lasts Forever, which eventually became Die Hard (Wiki claims the 1988 John McTiernan/Bruce Willis movie “does not follow the source material very closely … although … some of its memorable scenes, characters and dialogue are adapted directly”).

Screenwriting guru Robert McKee knows all about mythic structures. I had the great pleasure a few years ago to quiz the great man about Star Wars, and McKee maintained George Lucas only noticed after the fact that his space saga fitted the “monomyth” model of Joseph Campbell, and Lucas was then quite happy to use the association to claim an “intellectual validity”. “Hollywood in general likes to pretend it has an intellectual validity,” said McKee (before attempting to help me distinguish between FORM and FORMULA, but that’s another story).

Campbell’s monomyth model – see his The Hero With A Thousand Faces – says, in essence: “A hero ventures forth from the world of common day into a region of supernatural wonder. Fabulous forces are there encountered and a decisive victory is won. The hero comes back from this mysterious adventure with the power to bestow boons on his fellow man.” Somewhere else in there he mentions an elixir – sounds like, “he licks her”.

Variety’s Owen Gleiberman in his review of The Green Knight takes time to remind us that Star Wars recycles “many, many things from the past”, its DNA including everything from King Arthur all the way up to the movie serials of the 1940s and 50s, Ford’s The Searchers, Kurosawa’s The Hidden Fortress and Tolkien’s The Lord Of The Rings, the screen versions of which Gleiberman claims “were, in effect, the true prequels of Star Wars” (Tolkien, too, had translated Sir Gawain And The Green Knight from the original Middle English). 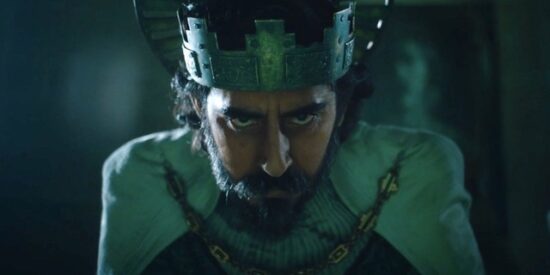 It depends, I suppose, on which guru, method or teacher you follow (or none at all?). Suffice to say Lowery’s The Green Knight needs no grafted-on “intellectual validity”. The extended climactic “dream” sequence may at first seem baffling and/ or beautifully mad. But viewed through the prism of the similar storytelling tactic employed in Kazantzakis/Scorsese’s The Last Temptation Of Christ, it may reveal a few vital life lessons, and perhaps even grant you the power to bestow boons on your fellow movie travellers.

Now … All these specimens of man,
So various in their pith and plan,
Curious to say
Were one man. Yea,
I was all they.