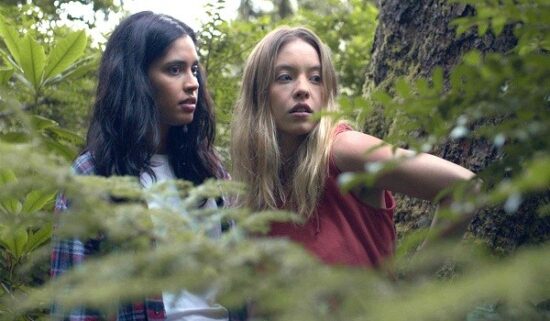 Still recovering from a recent breakup, Karen (Otmara Marrero) drives to her ex’s unoccupied, secluded lake house. She breaks in by hurling a rock through a window and makes herself at home. The next evening, a young woman named Lana (Sydney Sweeney) emerges from the forest, looking for her dog. She asks for a ride, but Karen hesitates; after all, they just met. Although she openly suspects there is no missing dog, she gives the mysterious visitor a ride anyway. Why take such a risk? Perhaps sensing Karen’s emotional vulnerability, Lana insinuates herself into the older woman’s life; before long, she’s regularly spending the night.

Thus begins Lara Gallagher’s assured, unsettling Clementine (2019), which – with its focus on two women in a remote setting – immediately calls Bergman’s Persona (1966) to mind (viewers may remember Ullmann’s Elisabet when Karen accidentally cuts herself with a shard of glass). Indeed, this basic narrative setup has experienced a resurgence in recent genre cinema, from Alex Ross Perry’s Queen of Earth (2015) to Colin Minihan’s What Keeps You Alive (2018). But Gallagher twists what first seems to be a psychological thriller into something else entirely. Something much sadder.

The opening act flirts with horror. A bright red phone rings ominously, stormy winds batter a garbage bag taped to the broken window, and Katy Jarzebowski’s ominous score – its three-key progression ending on a slightly-distorted note – hints at danger lurking just beyond the frame. However, as Karen and Lara’s relationship evolves, the narrative morphs into a romantic drama; they smoke, listen to music, and discuss their hopes and fears late into the night. Their exchanges – pitched at a lower key than, say, Perry’s frenzied dialogue – are among the film’s most affecting moments. The recurring gesture of hands rubbing against a back, for instance, says so much more than any verbal confrontation could.

It’s when other characters – such as local handyman Beau (Will Britain) – enter the picture that Clementine loses some of its footing, and a third act pivot into revenge thriller territory doesn’t quite work, either. After Lana reveals that two local men have manipulated her into filming a sex tape under the pretext of an acting audition, Karen tracks them down to retrieve and destroy the tape. A sequence in which she grabs a gun and sneaks into the men’s house feels like it’s from another movie altogether.

Despite such missteps, a series of revelations about Lana’s true identity pack quite an emotional punch. These final scenes convey a simple, but powerful, message about Karen’s need to not only move on, but to also grow up. Her journey to this endpoint has its hitches, but Gallagher sticks the landing in a most unexpected fashion.