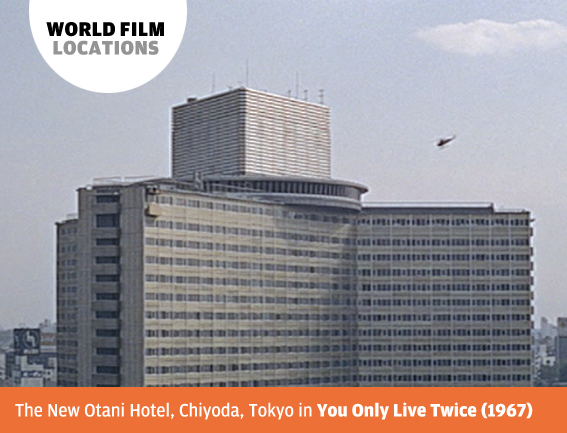 With the on-sale date of the first four titles of Intellect’s new book series, World Film Locations, fast approaching (September 12th), The Big Picture here publishes an extract from the Tokyo volume which features The New Otani Hotel as seen in Lewis Gilbert’s Japan-set Bond favourite You Only Live Twice.

Tokyo’s 1964 Summer Olympics showcased post-war Japan’s re-emergence, announcing their status as an economic power and technological leader. The world looked on with fascination, both at the ‘exoticism’ of traditional Japan and the modernity and technical innovation of the new. It was the natural setting for the 1967 James Bond film, You Only Live Twice.

Locations extended from Tokyo to the volcanoes of Kagoshima. One particularly memorable location was Chiyoda-ku’s New Otani Hotel, built to coincide with the Olympics. The hotel and its rooftop revolving restaurant stand in for the headquarters of Osato Chemicals − a front for the evil organization SPECTRE.

Many scenes, including car chases, gun-battles and roof-top helicopter landings, take place around the actual site. However, it is the sleek, Ken Adam-designed interior that is best remembered: the setting for furious hand-to-hand and sword combat with a hulking henchman and, later, a meeting with a sultry redhead who, with the aid of stereotypical Japanese minions and 1967-style high tech, uncover Bond’s identity. The set, with its sleek mid-century modern industrial design and classical Japanese elements is a perfect reflection of the ‘new’ Japan of the mid-1960s.

Though two additional towers have been added nearby, the New Otani of YOLT remains well-maintained and virtually unchanged, including the surrounding sixteenth century gardens. Located a short walk from Akasakamitsuke station on the Marunouchi line, it is definitely worth visiting. Recommended are vodka-martinis in the rooftop restaurant that played Osato’s office. Few views of Tokyo are as beautiful or serene.