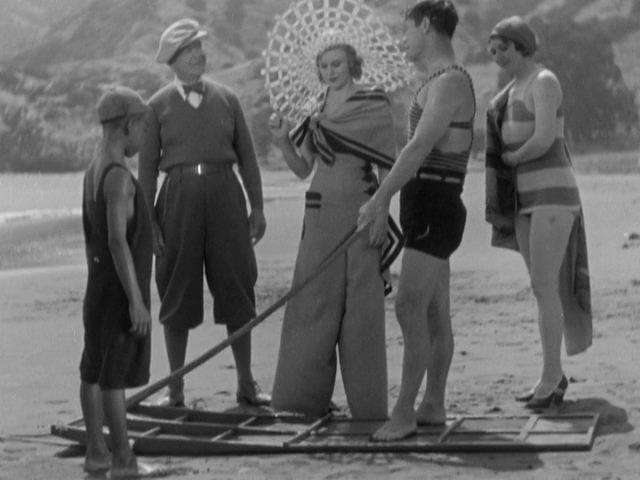 “I really couldn’t respect a man unless he were a great swimmer,” says Alice Brandon (Ginger Rogers) to Joe Holt (Joe E. Brown) in Lloyd Bacon’s comedy You Said A Mouthful (1932).

A common feature of screen comedies in the 1920s and ’30s was social commentary on masculinity, with comedians often cast as shy, timid men ridiculed by friends and co-workers – the kind of guy who loves a beautiful girl from afar but is unable to speak to her. The girl doesn’t notice him and instead loves a popular, muscular male, albeit one who lacks the comedian’s kind-heartedness.

You Said A Mouthful is one such comedy, using the sport of swimming as a symbol for masculinity and a way for the comedian to prove himself in the eyes of the pretty girl.

Through a mistaken identity plot, Alice confuses Holt for a famous swimming champion with the same name. In truth, Holt was a shipping clerk at a rubber company until he quit this job believing his late aunt had left him a large inheritance; this, however, turned out to be comprised of worthless bonds.

Holt discovers he is expected to swim in a twenty mile race and, while he is afraid to swim and almost certain he will drown, he continues to let others, including Alice, believe he is a swimming champion; after all, she’s expressed an interest in him over competing swimmer Ed Dover (Preston Foster). If Holt can win the race, he’ll win Alice’s love as well.

You Said A Mouthful is also typical of American movies made during the Great Depression in that it features a down-on-his-luck hero put in a get-rich-quick scenario; the winner of the race will receive a cash prize of $25,000. This type of story was designed to give audiences hope that prosperity was just around the corner.

Time has not been kind to Joe E. Brown. His comedies have remained generally unknown to the mass public, despite being available on DVD, and he gets lost in the shuffle when compared to other comedians of his era. Today, he’s best known for delivering the famous last line in Billy Wilder’s Some Like It Hot (1958).

But, as seen in You Said A Mouthful, Brown possessed great athletic skills, which were usually incorporated into his comedies, making him comparable to Buster Keaton, while maintaining an all-American everyman appeal, similar to Harold Lloyd.

All the elements that made Brown’s persona enduring, such as his never-give-up mentality, athletic background and ability to perform physical comedy, come to the fore in the movie’s swimming race sequence. Though it then finishes with a happy Hollywood ending that’s more than a little cliché, You Said A Mouthful showcases Brown’s energy at its peak, and so stands out as the most entertaining of his 1930s comedies.