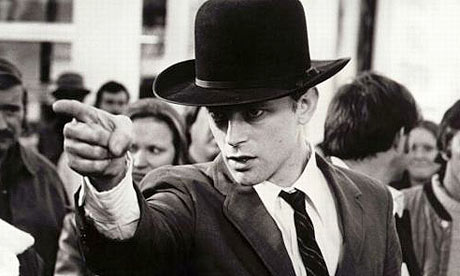 At the grand old age of 73, Hollywood veteran John Huston was still enamoured by social misfits, rebels and loners, and in adapting Flannery O’Connor’s 1952 debut novel Wise Blood Huston portrayed another of the idiosyncratic individualists that often took centre stage in his films.

O’Connor’s Southern Gothic tale of disillusioned army vet cum street preacher Hazel Motes’s compulsion to ‘do some things I ain’t ever done before’ is unforgettably realised by Huston and his leading man Brad Dourif. Dourif, one of Hollywood’s ‘nearly men’ outsiders, gives a note perfect performance as the conflicted, angry loner who, torn between his hellfire and brimstone upbringing and the concept of spiritual life in the modern world, founds the ‘Church of Truth Without Jesus Christ Crucified’. With no family, friends, job or home to speak of, and bedecked in a thrift store suit and hat, Motes is adrift in a society he despairs of and feels compelled to rail against.

Motes is appalled and fascinated in equal measure by the cultural malaise, religious hucksterism and spiritual hypocrisy embodied in the rednecks, racists, shysters and deadbeats he encounters, and grows ever more convinced that the ‘word’ as it is taught is a lie. Motes’s radical teachings reject all notions of guilt and redemption, and condemn the story of Jesus as being nothing more than an elaborate trick. Motes, a faithless believer, tries and fails to convince passersby that in nothingness lies salvation, his peculiar and contradictory faithless devotion a reflection of his own deep seated spiritual crisis.

Motes succumbs to both inner torment and the callous indifference of the world, blinding himself with Lyme and sleeping with his chest wrapped in barbwire, broken and consumed with loathing for himself and humanity. Part satire, part existential tragedy, Wise Blood may not have been a box office success but Huston considered it to be on a par with any of his more feted projects, and Dourif would never again shine as brightly or so convincingly as he did playing the passionate but wayward and ultimately doomed Hazel Motes.