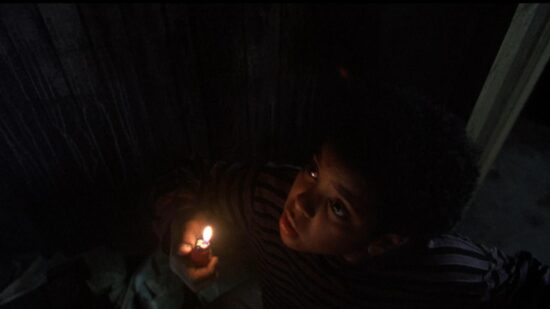 “You can understand why someone would rob a house if they’re broke, but to rob…children of their lives [is] far more insidious…” Wes Craven states in his director’s commentary for the  R-rated 1991 film, The People Under the Stairs. Loosely based on a true occurrence, Craven’s “horror noire” examines the irony of its Mother (Wendy Robie) and Father (Everett McGill) taking their parental roles to erratic, sexual, and devilish limits.

A terrifyingly campy film, viewers are introduced to protagonist Poindexter “Fool” (Brandon Quintin Adams), who is getting his fortune told on his 13th birthday. His sister Ruby (Kelly Jo Minter) pulls out the card, Fool, which she defines as: “Not the stupid kind, but the ignorant kind.” To add frosting to the cake, Fool’s family is being evicted from their Lenox condominium for being 3 days late with their rent, which must now be paid triple the amount or they will be evacuated. Fool, aspiring to be a doctor and hoping his bedridden mother’s health improves, will do anything to better his family’s situation, including teaming with Ruby’s “friend” Leroy (Ving Rhames) in a Goonies-esque heist.

Leroy’s sting entails robbing the proprietor and landlords, Mother and Father, who are loathed by all in the neighborhood. Scenes of the miserly couple reveal their scheme to evict the poor and profit from new property in town, without a second thought as to what will happen to the disempowered in their charge. Believing there is hidden treasure, Fool, Leroy, and their partner Spenser (Jeremy Roberts) break into Mother and Father’s moratorium abode. What they stumble upon is not just glitter and gold, but a nightmarish perversion from which they wish to awaken. 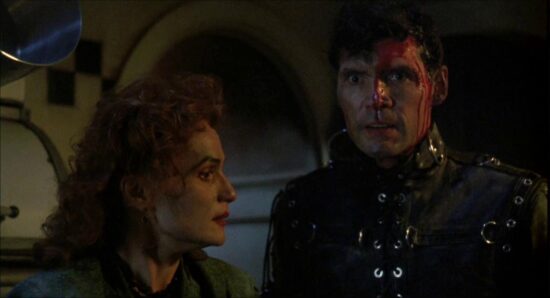 The walls within the house are permeated with religion and sex, in the guise of an outdated 1950s dark aesthetic. The couple themselves are also out-of-place, with their slicked looks and painted faces. Their upbringing is an unusual tale that is left unanswered. What is known is their possible incestual atrocities and, as Fool later discovers, their love of leather. Father is seen running throughout the house in S&M attire, chasing out his prey through the maze-like home. Although Mother is seen calling all the shots and spewing bible verses, Father’s male ego swells as he torments his victims. His chauvinist hunger even grows into ribald lust towards his “daughter,” Alice (A.J. Langer), whom they overpower to be the perfect female child in their family façade.

As Fool progresses within the devil’s lair, he comes to find more than just a withered Alice being kept hidden from the world. A hoard of kidnapped and tortured young boys live within the bowels of the decrepit house. Years of physical and mental abuse have damaged the boys’ psyches. Lack of obeying Mother and Father’s ascetic lifestyle have also cost each of them an eye, an ear, or a tongue for going against their “rules.” The boys are treated as nothing more than rats scurrying the basement, eating whatever piece of meat is thrown their way. Mother and Father are literally and figuratively living “above” the lower class.

A great feel-good escape film, the movie ends with Fool using his youthful bravado to save the day. Money explodes from the house, causing a celebration. Children run outside with their families, joyful of the unexpected wealth. Meanwhile, the people under the stairs walk away unnoticed, joyful to taste the sweet wealth of freedom. Wes Craven’s humble demeanor and soft spoken nature allow him to develop a perfectly morbid fairytale, half horror and half social commentary. It shows that children make their own fortune and can attempt extreme bravery, even when living through trauma. Craven recognizes that he crosses boundaries, focusing on things that are not his own to comment on, but must be acknowledged. There are other reasons to find excitement in revisiting this film, as Jordan Peele prepares to reinvent the tale in his own words.