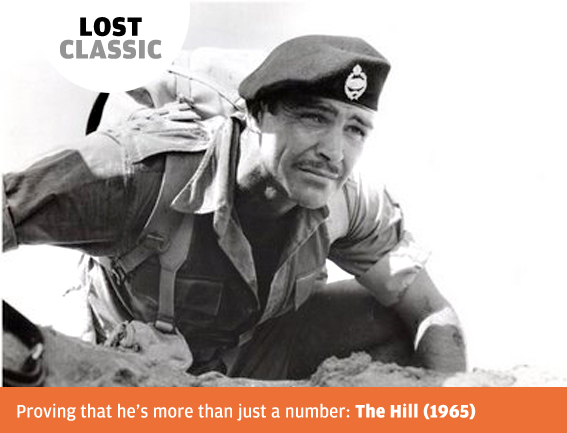 Earlier this year, Clint Eastwood’s 80th birthday heralded a major celebration and retrospective for one of cinema’s most cherished elder statesmen. On 25th August, Sean Connery reaches the same milestone, but it’s doubtful it will be marked with anything like the same fanfare.

Connery remains eternally underrated. Forever associated with James Bond, it’s become assumed that he’s a movie star first and an actor second. Worse, Connery’s prickly disdain for the character who made his name – not to mention modern filmmaking, the British government, and political correctness – has made him a hard figure to love in the same way as Clint.

It’s revealing that, despite the anniversary, one of Connery’s finest performances remains unavailable to buy on Region 2 DVD. The Hill was Connery’s first collaboration with Sidney Lumet, a director who would do more than most to push the actor beyond his apparently limited range. Connery at least is a good judge of his own performances: he rated The Hill, alongside later Lumet collaboration The Offence, as one of his finest.

The actor plays Sergeant Joe Roberts, a WWII soldier who refuses to lead his men to certain slaughter and is sent to a prison camp in North Africa. Under the punishing regime of old-school Sergeant Major Wilson (Harry Andrews at his bombastic best), the inmates are forced to march up and down a fearsome hill in the desert sun, to be broken down and built up again. What nobody is counting on is that Wilson’s right-hand man, Ian Hendry’s Staff Sergeant Williams, is only concerned with the breaking.

The unique set-up – a British P.O.W. camp for British prisoners – allows Lumet to rewrite the cosy simplicity of conventional WW2 dramas, and an unsettling atmosphere of institutional terror pervades the film. Consider this: how many of The Hill‘s peers feature Nazi protagonists as chilling as Williams? Lumet made this film at exactly the right time. Any earlier and it would be tame; a few years later and it would be too explicit; but in 1965 the balance is perfect. The raw psychological violence that Lumet orchestrates has a searing, sweltering intensity that’s rarely been matched. At times the parched, sun-drunk delirium of Oswald Morris’ BAFTA-winning cinematography resembles a macho, monochrome version of Black Narcissus‘ exotic madness. 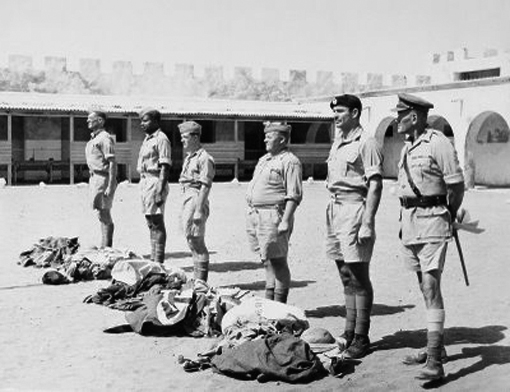 The claustrophobia is intensified by the latent theatricality of the film, robbed of music and often confined to quarters. It’s no surprise to learn the film was originally written as a play, but Lumet avoids things becoming overly stagy with bold, modish filmmaking influenced by Kubrick and Welles (notably, the bravura, Touch of Evil-like opening shot). The fluid long takes really sell the story’s sadism, because the extras (and sometimes the leads!) are forced to march and work out on-screen for long periods, whilst periodic bursts of jagged editing maintain the jittery tension. There’s even room for a large-scale set-piece, as Wilson takes on the whole prison in a simmering mutiny.

That said, Lumet’s reputation as an actor’s director is to the fore. Connery is surrounded by an ensemble of stalwart players that’s very much (with the exception of American Ossie Davis) a British replay of Lumet’s fabled Twelve Angry Men: Jack Watson, Alfred Lynch, Ian Bannen, Roy Kinnear… Collectively, the actors work wonders with dialogue that might sound didactic in lesser hands, teasing out its brittle humour and earthy authenticity. Yet the standout is the man who says the least. Hendry is utterly terrifying as Williams even when he’s just standing there; with his face half-hidden under his cap, he sells this monster with little more than a thin smile and the cocky bravado of his posture.

But it’s Connery’s show, his second real attempt (after Hitchcock’s Marnie) to prove his acting mettle. Shot between Goldfinger and Thunderball, he couldn’t be less like Bond if he tried – and not only because, for the first time, Connery allows his balding pate to be visible. Forget the suave super-spy; Roberts is a professional working-class foot soldier, gruff and proud but driven by a bitter enmity to fight rules he no longer believes in. It’s a difficult role to cast and play, for whilst Roberts is a celebrity prisoner he’s not always the central focus. It needs both the charisma of a star and the humility of an ensemble player, and Connery judges it superbly, calibrating his performance to the demands of the story.

More importantly, his presence here – at the heights of 60s Bondmania – is a calculated shock to the cultural system. While 007 was a throwback to an era when the United Kingdom still had a say in world affairs, The Hill‘s introspective, anti-heroic stance delivers a satirical, knockout punch against the country’s waning colonial ambitions. Whilst the Brits argue fractiously over the minutiae of the King’s regulations, it’s the sole immigrant prisoner who effectively takes over the asylum, signalling that the gentlemen’s club approach of the old world is over. Despite the absence of dolly-birds, cool cars or globe-trotting action, The Hill is just as much a portrait of the Sixties as any of Connery’s fantasies of Bond-age. But who wants honesty or pessimism? Even if we bother to celebrate Connery’s birthday, this is one film that probably won’t be invited to the party.

Simon Kinnear is a freelance contributor to Total Film, and blogs about cinema at kinnema.blogspot.com