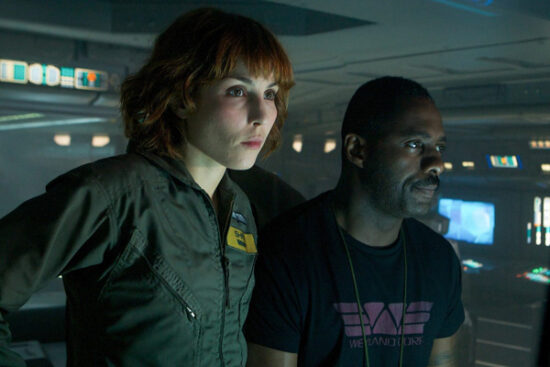 Ridley Scott’s fascination with omniscience goes to the outer limits in his 2012 science fiction film, Prometheus (2012). Often assumed a prequel to Alien (1979), Prometheus focuses on discovering mankind’s “engineers,” while amalgamating concepts of heroes and villains. Scott’s unsurpassable directing techniques are shown through the tiniest features in his characters. Even the unsettling soundtrack brings to life an otherworldly sensation in which we, humans, are not worthy of partaking.

The film unveils a Grecian-like Engineer (humanoid) landing on Earth and delivering mortality, only at the cost of his life. In 2089, scientists Elizabeth Shaw (Noomi Rapace) and Charlie Holloway (Logan Marshall-Green) discover evidence of life on other planets. Fast forward to 2093; thanks to Weyland Enterprises, Shaw and Holloway are set for space. We are surrounded by a mélange of crew members who possess quirks and flaws. Included in this group is the stealthy butler-android, David, played by the ingenious Michael Fassbender. Just as mystifying as David is the cruel ship leader, Vickers (Charlize Theron). As time progresses, we learn Shaw’s presence was more or less a good-luck-charm for the apathetic crew.

Unbeknownst to the rest of the members, including Peter Weyland (Guy Pearce) himself, is David’s agenda. His personal growth occurs prior to everyone’s release from cryostasis. He studies, smoothens, and perfects himself into the individual he wants to become. This is displayed through his insolent, cheeky remarks. It is mentioned that David does not possess a soul, which may play a role in his lack of empathy for others. As terror begins to bubble up and envelop the crew members, we learn the nasty truth of why the expedition took place.

The most stellar moment unequivocally goes to Janek (Idris Elba) and his flight crew, Ravel and Chance (Benedict Wong and Emun Elliott). They unflinchingly save the day by sacrificing their ship and lives for the sake of stopping the evil engineer from delivering a cargo of disease to planet Earth. A superb leader, Janek commands and delegates without flaw, while retaining a comforting charm that allows even the iciest crew member (Vickers) to “warm up to him.” Janek’s character never has ulterior motives and speaks only truth, with conviction to do good.

What separates Janek and Shaw from the others is their faith. The heart-to-heart between the two is the sincerest moment in the film.

Shaw: “Don’t you want to know what they have to say?”
Janek: “I don’t care.”
Shaw: “Right. All you do is fly the ship.”
Janek: “That’s right.”
Shaw: “But you must care about something, Captain. If you didn’t, why are you here?”
Janek: “How about this: No matter what happens down there, I can’t bring none of that shit back home with us. Can’t let it happen. And I’ll do whatever I have to see that it doesn’t.”
Shaw: “Make sure you do, Captain.”

These individuals have never deceived, and for that they have remained strong until the very end. Shaw and Janek are the iconic figures who show gumption (performing one’s own cesarean can’t be an easy feat) for the greater good. Our android, David, on the other hand, has been surrounded by negativity and therefore disguises his deceptions as “the greater good” for the human race. No matter how far we travel, evil lurks wherever we go. We may even find a Xenomorph during that journey. Thanks to free will, it is up to us to make the right choices and do the right thing.