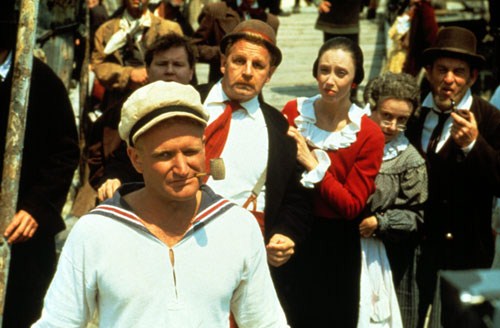 When Robin Williams died in August 2014, the many tributes recognized his award-winning performances and beloved family films. Few mentioned his first big screen starring role as the title character in Popeye (Robert Altman, 1980). Since its release critics have dismissed Altman’s adaptation of E.C. Segar’s comic strip about the spinach-eating sailor as a catastrophic career move. It has been blamed as a box office bomb that forced Altman to spend the 1980s directing low-budget play adaptations, cast out of Hollywood until his 1992 “comeback” The Player. Many believe that if not for Popeye, Altman would not have teetered on the edge of obscurity throughout the 1980s.

The effect of Popeye on Altman’s career was not so catastrophic. While Popeye did go over-budget, the film turned a profit at the box office in its original theatrical release and has since found even more success on television. The commercial failures of many of Altman’s critically acclaimed films throughout the 1970s are more to blame for his difficulty finding Hollywood work post-Popeye. Furthermore, Popeye has much more in common with such highly praised films as McCabe & Mrs. Miller (1971) and The Long Goodbye (1973) than any of the film’s detractors acknowledge. Despite Popeye being aimed at a different audience than Altman’s previous films, the movie features many stylistic touches and themes that are distinctively Altman’s.

One of Altman’s obvious signatures in Popeye is his revolutionary use of multi-track sound, which began in his first major film, MASH (1970). Popeye is full of conversation – for example, the townspeople whisper with suspicion as the unusual-looking Popeye passes them on the street in the film’s opening. Some of this dialogue is trivial (“Don’t forget to put the cat out, dear!” “We don’t have a cat!”), but is important in adding humor and a sense of community to Popeye’s town of Sweethaven. Sound effects used in the film are straight out of a cartoon – glass shatters loudly, slide whistles are heard when people fall down or climb up various structures, etc. Along with the film’s saturation of bright colours, the sound design creates an atmosphere of what the world of a comic strip might really be like, an effect critics celebrated in the similar six-color composition of Warren Beatty’s Dick Tracy (1990) a decade later. What critics might find so bizarre about Popeye’s world is that Altman did not try to fit E.C. Segar’s creations into our reality, instead Altman recreates Popeye’s cartoon world within our reality. It is similar to the stylistic choices made decades later by Robert Rodriguez and Frank Miller for their film adaptations of Miller’s Sin City (2005 & 2014) graphic novels.

These references to McCabe & Mrs. Miller in Popeye are not out-of-place because the films are similar thematically. Popeye is similar to Warren Beatty’s John McCabe (as well as Philip Marlowe [Elliott Gould] of The Long Goodbye) in that the characters constantly mutter under their breath, enabling them to air their thoughts aloud and provide ongoing commentary on the absurdities around them. Both Popeye and McCabe & Mrs. Miller begin with a rough-looking outsider entering a new town. The townsfolk of each film initially hold them in suspicion before gradually accepting them into the community. Of course, the do-gooder Popeye (who exclaims, “wrong is wrong even if it helps ya” during the gambling house scene) is much more likeable than McCabe. The outcomes of both films, therefore, are completely different – McCabe dies alone in the snow while Popeye stands in victory over his nemesis Bluto (Paul L. Smith) with his friends and makeshift family by his side. It is, after all, a family film.

Most of Altman’s films mock authority figures. This is evident in the way the surgeons mock the strict military personal in MASH and how Philip Marlowe treats the police with barefaced disrespect in The Long Goodbye. Popeye is no different in its treatment of authority figures. The first person Popeye meets after docking in Sweethaven is the bothersome Taxman (Donald Moffat), who imposes increasingly more ludicrous taxes on the sailor. The townspeople are obviously unhappy with being taxed to the extent of poverty, but they are either too afraid or too comfortable in their misery to do anything about their unhappiness. Popeye becomes a hero to the people when he literally throws the Taxman out of town. This is not unlike how Hawkeye, Duke, and Trapper (Donald Sutherland, Tom Skerritt, and Elliott Gould) become heroes of the 4077th through their various stunts against the strict commanding officers in MASH, or how Philip Marlowe becomes a more likeable character by mocking the heavy-handed police.

While natural families are often doomed in Altman’s films, makeshift families have far more success. The Oyl family in Popeye is not without dysfunction. Nana Oyl (Roberta Maxwell) is an overbearing mother who constantly worries about her children. Accordingly, her son, baby-faced Castor (Donovan Scott) is a hopeless “momma’s boy” and Olive (Shelley Duvall) is a spoiled brat. Cole Oyl (MacIntyre Dixon), the patriarch, is a doormat for the other members of his family and his constant demands for apologies are ignored. When introduced to Popeye, Olive obnoxiously brushes the rough-looking sailor off while she prepares for a party to celebrate her engagement to Bluto – an engagement that she has broken off three times previously. On the other hand, the fun-loving surgeons of the 4077th in MASH look to each other for support as a makeshift family while they operate on a steady stream of soldiers wounded on the battlefield. The prostitutes in McCabe & Mrs. Miller show their close ties in numerous scenes, such as when they bathe together and during a birthday party for one of the girls. Not surprisingly, in Popeye, the happiest people in town are the makeshift family of Popeye, Olive, and baby Swee’pea.

Altman could have sacrificed all of the characteristics that make him a unique filmmaker in order to make Popeye a generic all-ages film. Instead, Altman’s distinct flourishes created a recognizable community out of Popeye’s world. In this sense, Popeye seems much less a failure of Altman’s but instead a fascinating insertion of his frequently used themes and signatures in a film where they are unexpectedly found.

Chris McKittrick grew up during the peak of Spielbergian popcorn films
and has been devouring films (and popcorn) ever since. Being an
unabashed overachiever, Chris double-majored in Film and English in
college because he loves to read, write, and watch movies. Since then
Chris has become a published author of fiction and non-fiction, a
contributor to entertainment magazines and websites, and has spoken
about literature, film, and comic books at various conferences across
the United States.