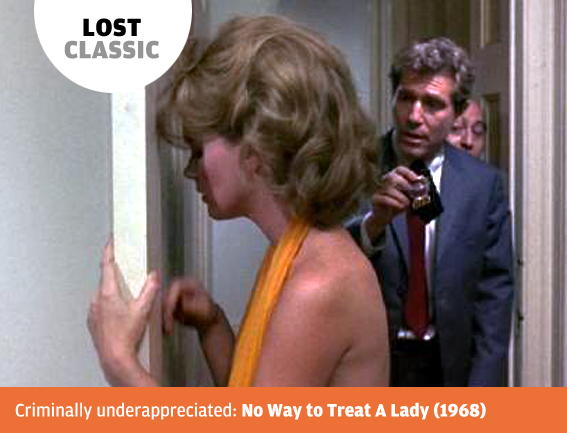 They say imitation is the sincerest form of flattery. In Jack Smight’s criminally underappreciated No Way to Treat a Lady it proves to be the most effective and blackly amusing form of murder. Rod Steiger hams it up as murderous mother-fixated thespian Christopher Gill, donning various disguises and dispatching his victims with a quick strangle, leaving only a lipstick-on-the-forehead calling card. Beware of imitations.

The film qualifies as a lost classic in the sense that it is one of those titles to somehow have so far escaped a region 2 DVD release – region 1 copies are out there, if a little pricey – and doesn’t seem to have had a UK television airing for the longest time. It can’t even be found chopped up into little ten-minute-long pieces on popular video sharing websites, gosh darn it. This is a pity because it deserves to be seen and appreciated by fans of the serial killer police procedural subgenre whose bloody footprints lead all the way up to and beyond David Fincher’s Zodiac (2007), even though is it essentially a black comedy.

This was the first of two films released in 1968 based on the handiwork of serial killer Albert DeSalvo. The latter, The Boston Strangler directed by Richard Fleischer, is the one people tend to remember, thanks to its more sombre tone, a surprisingly nuanced performance from a putty-nosed Tony Curtis in the title role and the irritating then-fashionable use of split screen (see The Thomas Crown Affair for a better example) to reveal parts of its narrative. But No Way to Treat a Lady can at least claim to be first past the post in the subject matter race, having received its cinema release some seven months before the Fleischer movie. 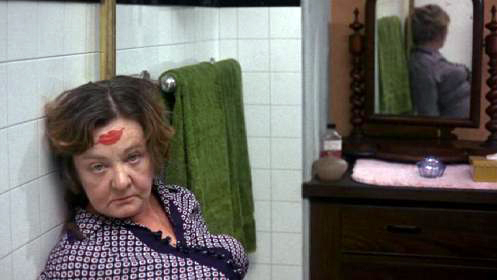 It was in fact based on William Goldman’s 1964 novel of the same name, which manages to interweave the strangler plot with both comedy and romance, both of which are retained in Smight’s film. The casting of George Segal as Detective Morris ‘Moe’ Brummel and the never-lovelier Lee Remick as love interest Kate Palmer ensures that there is a lightness of touch to these lead performances, which helps to counterbalance the schizophrenic oedipal histrionics of Steiger. Indeed if the film has a fault it is Steiger’s tendency to let over-studied idiosyncrasy seep into his scenes; one can accept that he is ‘in character’ when about his deadly business but Gill’s believability is stretched to breaking point on several occasions. At times it feels like a Steiger showreel, designed to demonstrate the actor’s range of characterisations and accents. His final prolonged and camped up death scene is, quite frankly, off the scale. So much scenery is chewed one fears no amount of Pepto Bismol will help sort out the indigestion.

Although well written and, Steiger’s flamboyance aside, well acted, there is nothing especially spectacular about the direction. Smight had cut his teeth in television and it does show, although if you’re looking to reappraise his back catalogue and can’t get hold of a copy of No Way to Treat a Lady you shouldn’t have too many problems tracking down the William Goldman-penned Harper AKA The Moving Target (1966) or the portmanteau curate’s egg The Illustrated Man (1969), also starring Steiger, as further examples of films with above average scripts propping up his otherwise serviceable work. Completists are advised to seek out his contributions to 1970s TV series such as Columbo and Banacek for later examples of his bland efficiency.

What makes the film arguably more interesting than The Boston Strangler is that it manages to combine the standard elements of the police procedural blueprint, done solidly enough, with an interesting parallel drawn between Gill and Brummel. Through domestic scenes showing the nebbish detective being given the ‘your brother, the doctor’ treatment from his stereotypically Jewish mother (Eileen Heckart) and other resultant scenes charting his acute hang-ups around approaching women – his wooing of Kate is fraught with awkwardness – we are encouraged to spot the similarities between him and the killer his pursues.
But the treatment is anything but heavy, indeed it is frequently played for laughs, of which there are plenty to be found throughout the film. A personal favourite stems from the Police’s attempts to flush out the dressing-up-box killer through bogus newspaper reports of another murder.  Cue the appearance of Mr. Kupperman (Michael Dunn), a person of restricted growth, at the police station with claims that it is he who is the murderer-of-a-thousand-faces. When Brummel patiently explains that the evidence suggests he is far too short to be the killer, Kupperman replies ‘you see – I’m a master of disguise’.

A further delight is Elieen Heckart as Mrs. Brummel who threatens at times to steal the show. One can tick off all of the stock-in characteristics of the New York Jewish mamma as they reveal themselves – overbearing, food-obsessed, doting, loving, anxious, the consummate working-class homemaker who is both disappointed with Moe’s career ambitions and protective of him when it comes to the opposite sex – she is even gifted with the title of the film in one of her lines: ‘I am sick at my heart when my own son goes looking at dead women’s naked bodies. I tell you Morris, it is no way to treat a lady.’