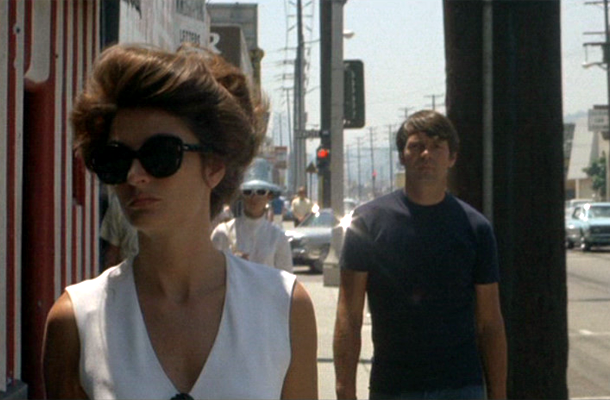 Perhaps if Jacques Demy had been able to convince Columbia executives Harrison Ford was the ideal leading man for Model Shop, then the film might well be a cult favourite today. Ford was Demy’s choice to star in his first American movie, but the suits at Columbia nixed him because back then he was an unknown.

A few brief screen tests shot by Demy of Ford can be seen in Agnes Varda’s lovely documentary about her husband’s work, The Universe of Jacques Demy (1995). Columbia insisted on the bland Gary Lockwood who had just appeared in Stanley Kubrick’s 2001: A Space Odyssey (1968). So we are left with what might have been, which is appropriately enough what the film is about.

Columbia brought Demy over from France after the success of The Umbrellas of Cherbourg (1964) and The Young Girls of Rochefort (1967). Both these films owe much to the Hollywood musical.  Gene Kelly even turns up in the latter to dance alongside the youngsters. Hollywood may have felt they had themselves another Vincent Minelli, but for all its Technicolor beauty and its unusual conceit of having every line of dialogue sung The Umbrellas of Cherbourg is a realistic tale in which love does not conquer all, but is thwarted by circumstance, and the couple in question move on with their lives. Likewise Model Shop turned out to be closer in spirit to the downbeat naturalism of Minelli’s underrated Some Came Running (1957) than any of that genius director’s musicals.

Model Shop takes place over the course of a day, as 26-year old George Matthews (Lockwood) tries to find 100 dollars to prevent his beloved MG car from being repossessed. George doesn’t have the money; he quit his job as an architect and now leads a fairly aimless existence. There is a girl, a pretty blonde wannabe actress (Alexandra Hay), but he does not take her seriously and she knows its time to go. While trying to borrow money from a friend in a car park George meets an elegantly dressed European lady and follows her to a large fancy house. 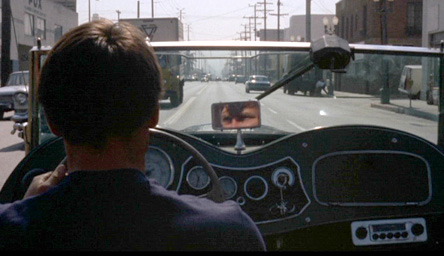 A stranger in a strange land: Jacques Demy’s view of LA

Lola (Anouk Aimee) knows George is following her. The house she leads him to is not her own. She is an illegal immigrant trying to earn enough money to go back to France by working in a Model Shop. Model shops were apparently popular in the 1960’s. Punters would pay for a camera and a roll of film then take pictures of the scantily clad models. George sees her again later in the day and follows her to her work, then hires her. Demy fans will recognise Lola as the titular heroine of his earlier film Lola (1961), now a decade older and yearning for the past. Demy links another of his movies to Model Shop, by having Lola explain how her husband ran off with a beautiful gambler, the character Jeanne Morreau played in The Bay of Angels (1963). Lola is no longer the joyous young romantic of the earlier film, but a melancholy figure who misses her younger days and Frankie, the American sailor she befriended back then who she has since learnt has been killed in Vietnam.

George takes an interest in Lola because her voice reminds him of somebody he met when he was in Paris, but he has more immediate problems.  George’s Draft Notice is through and he is due to report in a few days. The decision about his future has been made for him and he can either accept it or go on the run. Despite his feckless behaviour George is an intelligent young man, an aesthete who quit his job because he did not want to design luxury hotels and gas stations. Beauty moves him, whether it is his MG car or Lola, or the Los Angeles cityscape which he defends against accusations of ugliness.

Model Shop looks beautiful, but in the opening sequence – a reverse tracking shot through an unglamorous group of buildings next to a refinery – Demy and cinematographer Michel Hugo make Los Angeles seem like a dead end town, a nowhere place, a stopover for all the characters in the film before they move on to somewhere else. Demy was an outsider in Los Angeles and was clearly fascinated by the city. Model Shop does not feel right, the dialogue was written in French and translated into English by Carole Eastman and there is too much of it. People describe their feelings in more detail than is necessary, but this sense of dislocation helps the film.

Model Shop anticipates the restlessness of the Seventies film protagonist, always looking for something more than life appears to offer them and never finding it. It was ahead of its time and made little impact with audiences or critics. Demy went back to France and never worked in America again. His later films were mostly costume dramas with only the misjudged comedy A Slightly Pregnant Man (1973) trying for any contemporary relevance. Gary Lockwood and Michael Hugo both ended up working in episodic television though Hugo did get to lens the woeful Chuck Norris vehicle The Octagon (Eric Karson 1980). As for Harrison Ford, well we can only wonder whatever happened to him.