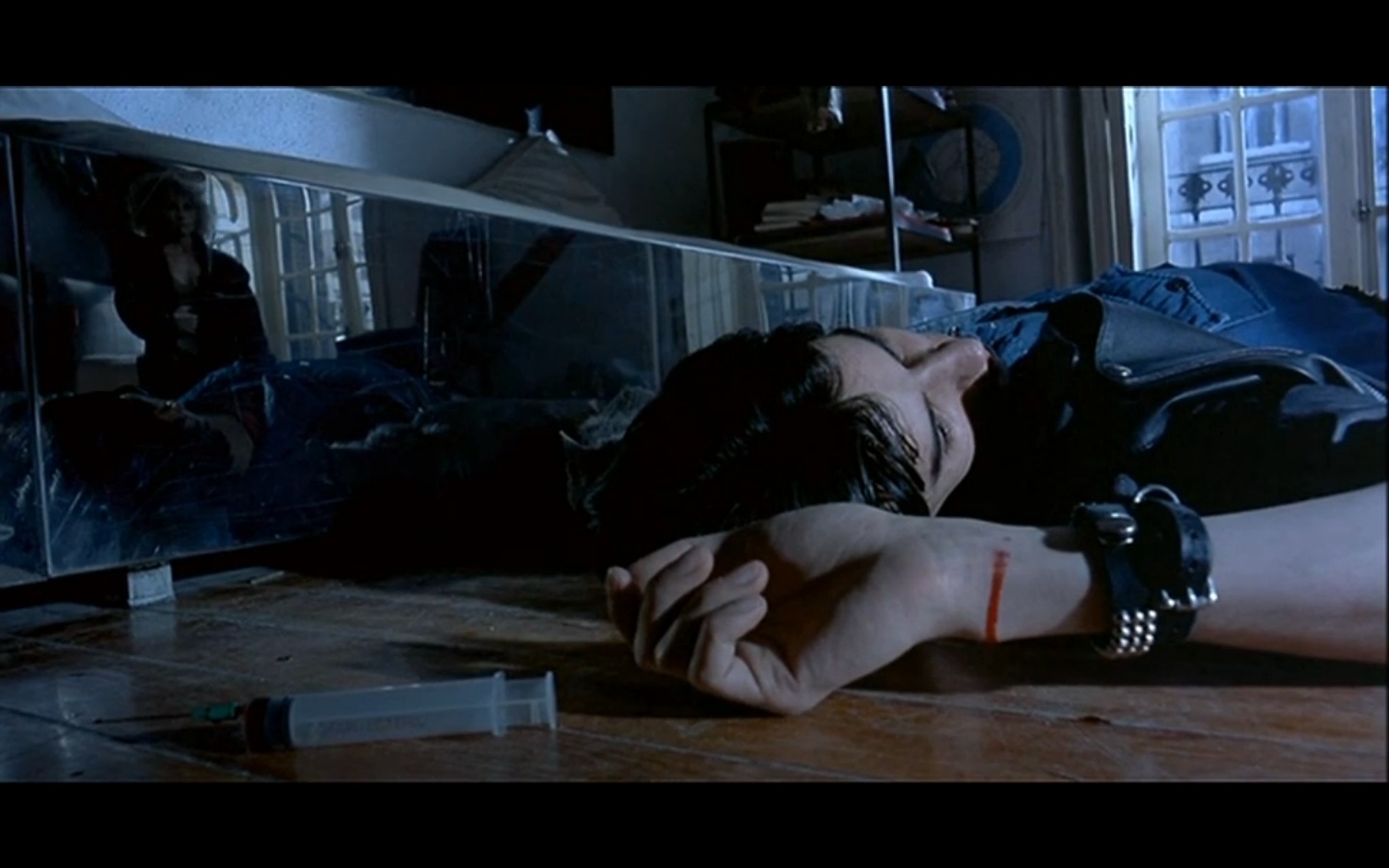 Dark Habits falls through the cracks between Pedro Almodóvar’s crude and anarchic first two films and the creative stride that he hit in the mid-1980s, which is a shame because it is the first of his films that is recognizably ‘Almodóvarian’. The film opens with a time-lapse shot of dusk falling on Madrid and this transitional image signals that we are entering an in-between space: an interstice between reality and fantasy, tragedy and comedy. Almodóvar has occupied that space ever since.

That this film represented an aesthetic step-change in the sophistication of Almodóvar’s use of camera and mise-en-scène is demonstrated early on in the shot where singer Yolanda Bel (Cristina Pascual) discovers her boyfriend after his death-by-overdose: all of the pertinent information, including her subsequent flight from the scene (seen in reflection), is visually contained within the frame. Yolanda takes refuge in the convent of the Humiliated Redeemers, run by a Mother Superior (Julieta Serrano) who is addicted to bolero music, heroin, and young women – Yolanda quickly becomes an obsession for her. 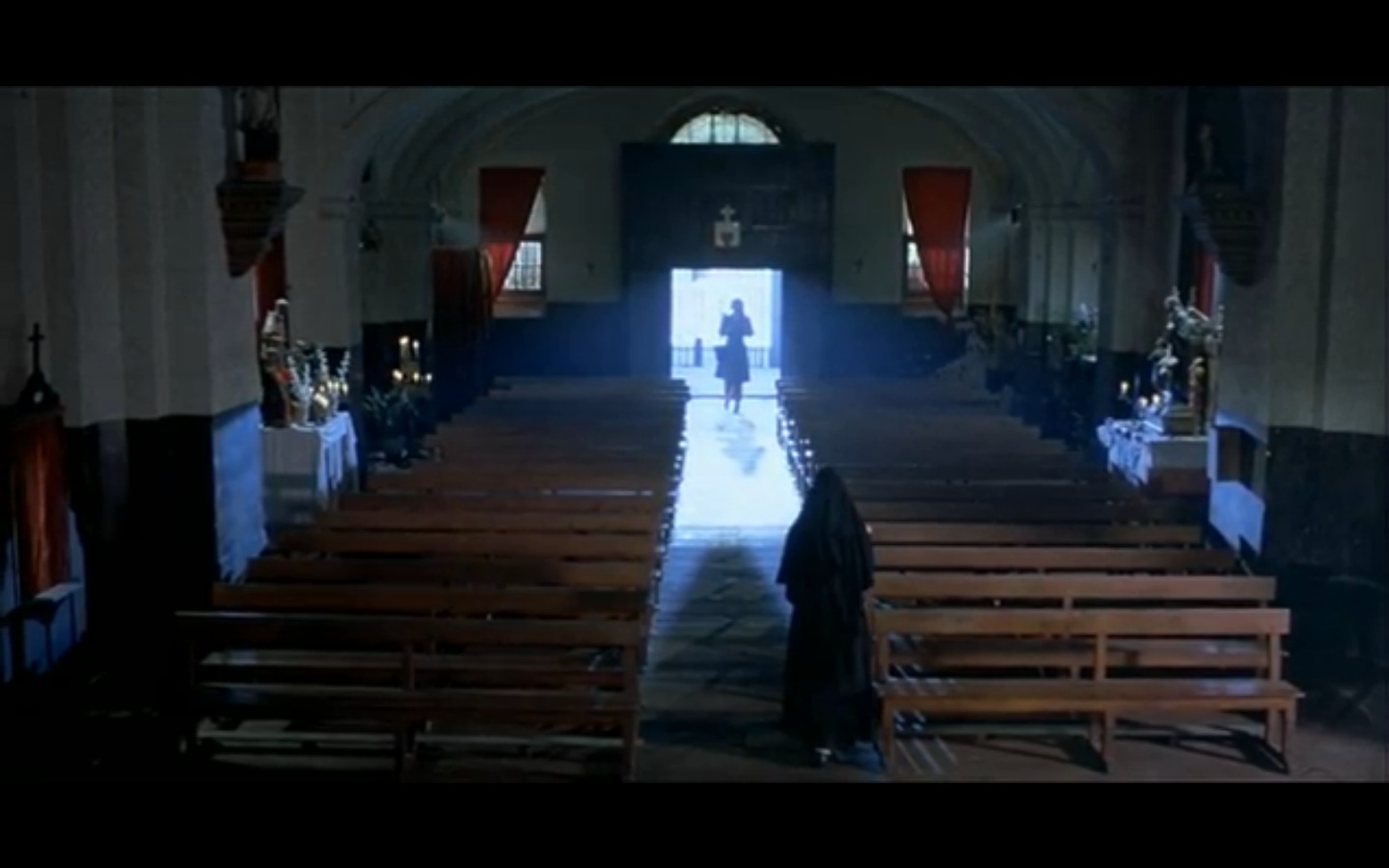 Distinct sets of aural and visual references divide the spaces inside the convent: the religious paintings of Francisco de Zurbarán and classical music in the pervasive darkness of the chapel, and the romanticism and melodrama of Douglas Sirk in combination with bolero songs (most notably Lucho Gatica’s ‘Encadenados’ (‘Chained Together’)) in the domestic spaces. The convent is under threat of closure and Yolanda hastens its demise by upsetting the equilibrium between the spaces, as foreshadowed by her arrival: backlit like a visiting extraterrestrial clad in red sequins, she causes light to spill into the gloom of the chapel. A riot of colour will follow. 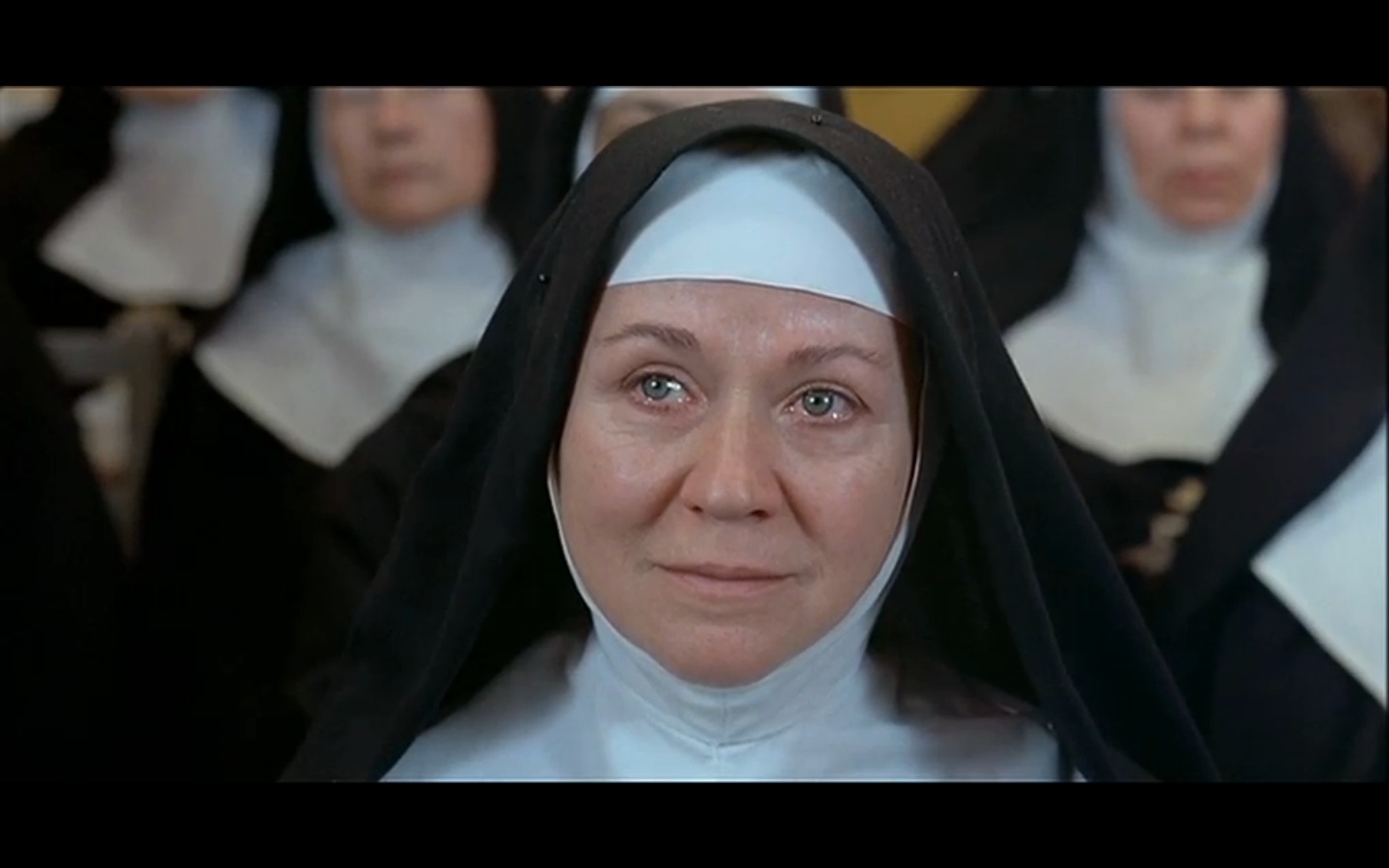 The nuns also exist in the interstices: in their cloistered existence they have been irrevocably shaped by the sinners they have encountered, making them both otherworldly and all too fallibly human. Dark Habits introduces Almodóvar’s effective repertory company – besides Serrano, the nuns include Carmen Maura (Sister Damned), Marisa Paredes (Sister Manure), and Chus Lampreave (Sister Rat) as comic relief, with Cecilia Roth appearing briefly as a delinquent runaway. Cristina Pascual is not the same calibre of actress as the rest of the cast (she was the producer’s girlfriend) but Almodóvar cannily circumvents her shortcomings with frequent close-ups of Julieta Serrano; Yolanda is presented to us through the Mother Superior’s infatuated eyes. 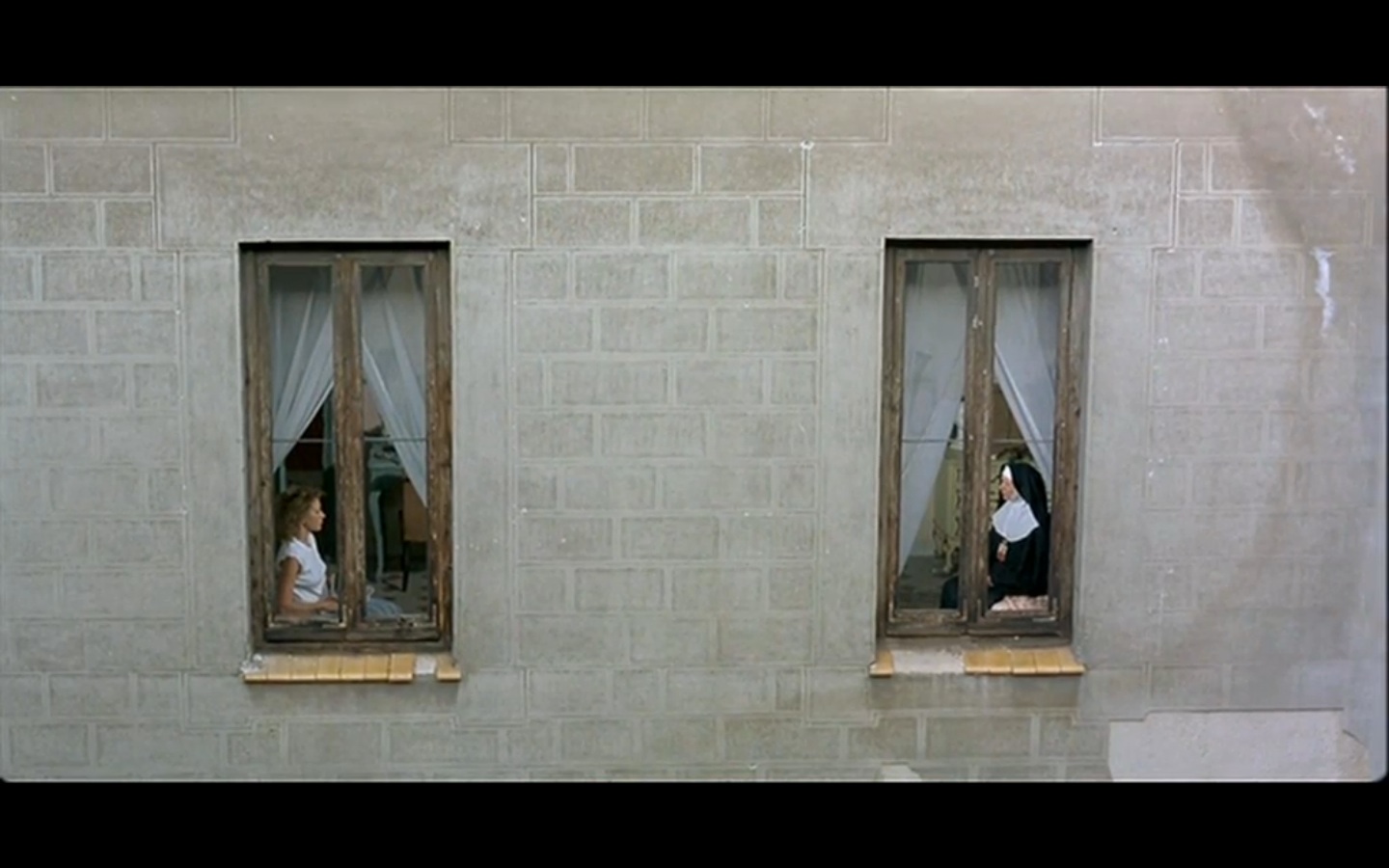 But we know that this love is one-sided because the song lyrics tell us so, and the women are often framed so as to suggest disunity. In one instance, Almodóvar frames them through separate windows – as if they were in a confessional – while they are in the same room. In contrast, in the film’s final shot, after the Mother Superior’s blood-chilling scream of despair, one of the same windows frames her being comforted by Sister Manure. It is probably Almodóvar’s bleakest ending, but the image also contains the female friendship that sustains so many of his protagonists. 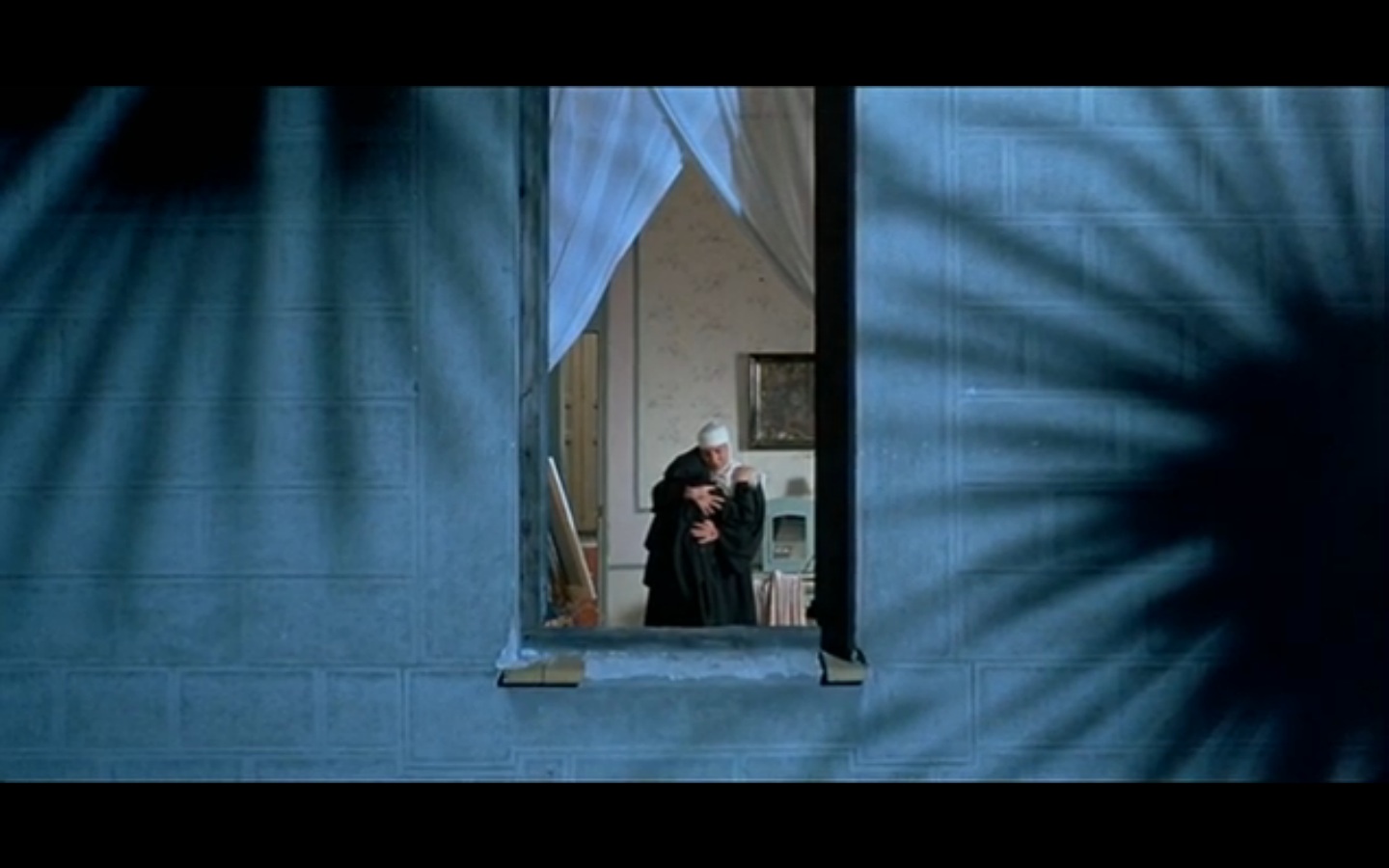