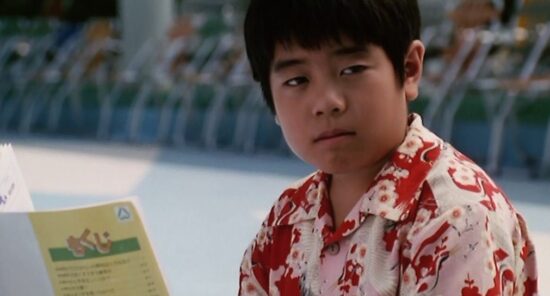 Kikujiro (Kikujiro no natsu, Japan, 1999) is a film about a boy – 9-year-old Masao (Yusuke Sekiguchi) – who leaves Tokyo in the summer holidays to go in search of his mother, who abandoned him years ago. Kikujiro (Takeshi Kitano), the husband of one of his grandmother’s friends, agrees to accompany him on the journey to Toyohashi, a town some 145 miles to the west of Tokyo, where Masao’s mother is presumed to live.

The film is divided into several parts, each corresponding to an entry in Masao’s diary and each preceded by a still with a title. The first sequences, set in Tokyo, show clearly the boy’s loneliness – he lives with his grandmother but she is at work, his schoolfriend leaves for a trip with his family, and the football club is closed during the holiday period. A series of shots of the young protagonist strolling around the streets of Tokyo show a number of well-known landmarks, including Sensoji, the famous temple in Asakusa. This once famous entertainment district is where Masao’s grandmother works and also has special significance for Kitano, who started his career as a comedian in Asakusa.

When Masao finds out where his mother lives, he decides to go to Toyohashi in search of her. This plan is soon thwarted when he is threatened by a gang of adolescents. However, he is rescued by Kikujiro’s wife (Kayoko Kishimoto), who challenges the youths and suggests that her husband should accompany Masao to Toyohashi. Her remark that Kikujiro adores children does not ring true, as he agrees to his wife’s idea only reluctantly. Throughout the journey, his behaviour is somewhat strange and at times even puzzling. The viewer might well think that the boy acts in a more responsible manner than his adult companion. Before leaving Tokyo, Kikujiro takes Masao to a bar and to track cycling races, where he gambles away not only the money his wife has given him but also the child’s 2000 yen. However, Masao behaves more responsibly and takes care of Kikujiro, getting bandages for him when he is beaten up by a group of yakuza for refusing to pay at a fairground. 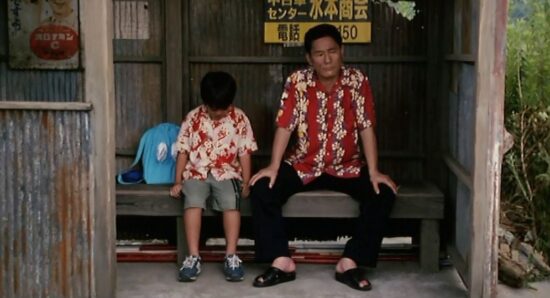 At first sight, the irascible but rather childlike man and the sad but astute boy are an odd couple. Kikujiro does almost all the talking, and Masao remains silent most of the time. Kikujiro’s back displays a colourful tattoo, suggesting that he was once a yakuza, and he is depicted as a trickster and a loser. He continually complains, uses vulgar language and has no respect for rules, which frequently brings him into conflict with others. He leaves a hotel without paying, steals a taxi, and smashes the front window of the van whose driver refuses to give him and Masao a lift.

However, when the boy is molested by an elderly man in a public toilet, he acts immediately and rescues his protégé. And when they arrive at the address in Toyohashi and Kikujiro quickly realizes that Masao’s mother has a husband and a daughter, he tries to console Masao by telling him that his mother has moved and other people now live at that address.

During their journey, the relationship between the two characters deepens, Kikujiro recognizing much of himself in his young companion. Despite his rather brusque manner, he is eager to make the boy happy. He redoubles his efforts to comfort him when their search for Masao’s mother comes to an abrupt end. In a menacing tone, he forces a biker to part with the tiny figure of a guardian angel that is attached to the man’s bike and gives it to Masao, pretending that it is a gift from his mother. A little later, he and Masao spend a few days camping with the biker, his friend and the itinerant poet who took them to Toyohashi in his car. The four men do their best to entertain the boy, with Kikujiro persuading the others to play a variety of games with Masao and to dress up as Native Americans, as aliens and even as an octopus. At the end of the film, Masao addresses Kikujiro with the respectful “uncle”–  in accordance with Japanese custom – and before they part company in Tokyo, asks him his name.

Kikujiro and Masao are depicted as outsiders who share and enjoy moments of leisure during the few days they spend with the three other men, who are not mainstream members of Japanese society either. Kitano’s mise-en-scène and the actors’ performances support this feeling of marginalization marvellously. Long takes with little movement or no movement at all and the use of ellipses in series of shots underline the feeling of detachment from mainstream society, and a number of shots in which the human figure is reduced to a mere figurine heighten this suggestion of isolation.

The camera keeps at a distance from the characters, with close-ups being rare. However, more significant than the implication of isolation and alienation is the way this contributes to expressing the characters’ lack of self-confidence. The boy is practically mute, watching but not talking. Kikujiro’s rudeness and aggression seem to stem from a morbid timidity. According to Kitano, the inspiration for this protagonist was his own father, also called Kikujiro. Kitano’s acting expresses this shyness by means of clumsy movements, the character seeming almost lethargic with his head bowed and his gaze lowered in discomfiture as evidence that he finds it difficult to communicate. 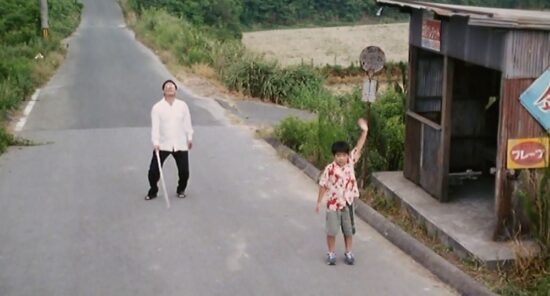 Takeshi Kitano started his career as a comedian and television presenter, and his eccentric performance in Kikujiro is characterized by a non-naturalistic acting style, for example in the sequence in which he pretends to be blind in order to improve his chances as a hitch-hiker. A number of shots show him fiddling with a white cane and imitating the movements of a blind person in an exaggerated way. Other moments are close to slapstick comedy, one example being the sequence at the swimming pool when Kikujiro, wearing a life belt – a challenge to his macho image – lands head down in the water. The next shot reveals that he had to be fished out by the lifeguards.

The episodic rhythm of the film is reminiscent of stand-up comedy, and dream sequences are another way in which realism is undermined. In his dreams, the boy relives past events, and in one nightmare, the child molester appears – now as a menacing, demon-like figure in a series of shots dominated by the colour red. Many poetic images figure in the film: a colourful windmill stuck in a heap of stones, the sunflower attached to Masao’s rucksack, the huge leaves the two travellers put on their heads as protection from the sun. The small figure of the guardian angel and the white, angel-like wings on Masao’s light-blue rucksack contribute to the film’s fairy-tale dimension. The playful piano tune in Joe Hisaishi’s score enhances the joyful mood but has a melancholic quality as well.

In Kikujiro, Kitano departs – but not for the first time – from the bleak world view of films such as Sonatine (Sonachine, 1993) and Hana-bi (1997). Violence takes place off screen, but there is nevertheless a feeling of sadness that permeates the film’s light-heartedness. Kikujiro shows that there is no such a thing as perfect harmony and that someone can be likeable despite imperfections. The filming, editing and acting all support the predominant feeling of detachment, but despite this feeling, Kitano succeeds marvellously in portraying a number of very affectionate human characters. 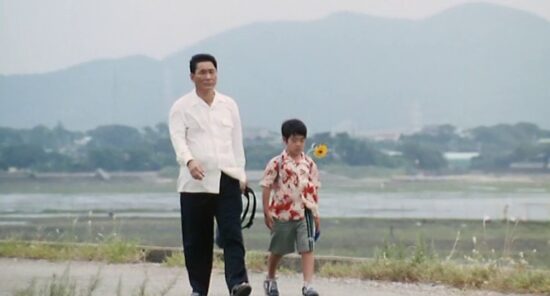