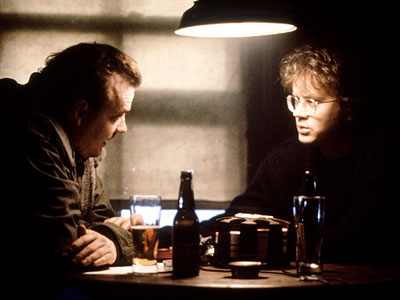 Psychological horror has long been the neglected offspring of a genre that too often falls back on lazy shocks, recycled storylines and dismembered body parts.

Yet, it’s through this underused sub-genre that some of horror’s finest hours have emerged, not least of which the largely forgotten Jacob’s Ladder.

Directed by Adrian Lyne, Jacob’s Ladder may seem like an odd fit in a filmography dominated by such libidinous titles as 9½ Weeks and Indecent Proposal, but makes more sense when you consider it followed his 1987 smash Fatal Attraction, a psychological horror in all but name that scared the shit out of men and riled feminists the world over.

Vietnam vet Jacob Singer’s (Tim Robbins) nightmares/flashbacks of a horrific incident during the war begin to bleed into his waking life when he experiences demonic visions that grow ever more disturbing and threatening. Jacob’s slippery grasp on reality is further corroded by his unwitting involvement in what appears to be a deadly military conspiracy seeking to silence him.

Much like his tortured protagonist, Lyne never lets the viewer settle for more than a few minutes before taking a further step down the ladder towards hell. Best known at the time for supporting turns in Bull Durham and Cadillac Man (not forgetting Howard the Duck and Erik the Viking), Robbins brings a tragic innocence to the tortured Jacob, a psychologically scarred war vet who’s as terrified as he is confused by what he’s being forced to endure.

What makes Jacob’s visions more frightening is the plausibility in which Lyne presents them. One woman appears to have filed-down horns which only become apparent when her hat slips, while a car trying to run him down contains the violently shaking masked figure he glimpsed earlier at the back of a subway train. Cronenbergian body horror is also used to phantasmagorical effect at a party where Jacob’s girlfriend Jezebel (Elizabeth Peña) is seemingly violated by a grotesque demon; and the unnerving hospital scene when an incapacitated Jacob is confronted by doctors who really don’t seem to have his best interests at heart.

The film features a number of startling images, including a helicopter shot Oliver Stone would have been proud of and the haunting moment when a coin’s sudden movement spells doom for one character. Lyne’s inspirations for the film’s visual palette include the Oscar-winning 1962 short film An Occurrence at Owl Creek Bridge and the austere work of artist Francis Bacon (in particular the film’s poster which shows a ghostly Jacob seemingly trapped in an abyss).

Despite toning down Bruce Joel Rubin’s portentous script, the film is still cut through with Old Testament religious symbolism, from the title that refers to a chapter in Genesis in which the prophet Jacob dreams of a ladder ascending to heaven, to the overtly Biblical names (Jacob, Jezebel, his ex-wife Sarah, who in the Bible was Jacob’s grandmother, and son Gabe/Gabriel) and the angelic quality of Jacob’s chiropractor Louis (Danny Aiello).

Louis’ citation to Jacob of Christian philosopher Meister Eckhart about devils really being angels freeing a soul that isn’t ready to let go not only strikes at the heart of Jacob’s tortured psyche, but is also a breadcrumb left by Lyne that provides one explanation of the film’s wider context.

While its unfortunate protagonist is unable to separate reality from demonic hallucination, the unique and relentlessly creepy Jacob’s Ladder can be viewed through a prism of nightmarish perceptions, all as valid as each other.