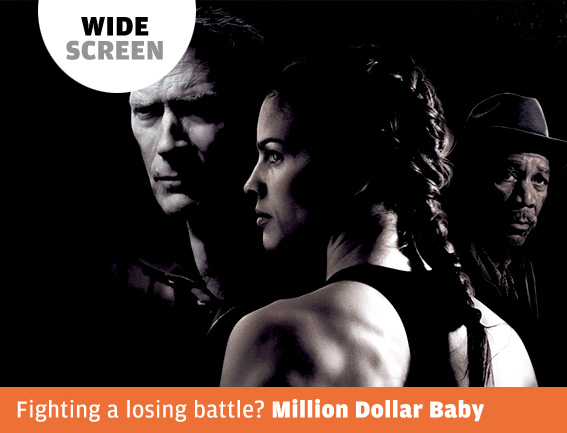 When Chris Rock hosted the 77th Annual Academy Awards, a pre-filmed segment flashed across the screen. Edited for giggles, it showed a microphone-equipped Rock smirking mischievously as he wandered around a Los Angeles cinema asking regular Joes which movies they’d paid to see that year. To refresh our collective short-term memories, films like Finding Neverland, Ray, The Aviator, Hotel Rwanda, Sideways, and Million Dollar Baby were garnering the most critical attention that year and had snagged the top nods at the Oscars. These films were moving, cathartic and beautifully-narrated with photographic sheen. They told the stories of struggling heroes, tragic love stories, budding romances, and feats of strength. That tired aphorism, “they made us laugh, they made us cry” applies in full totality.

But did anybody see them?

Time after time, as Rock’s selection of interviewees grew more eclectic and oddball, people shook their heads to the likes Million Dollar Baby or Sideways, but they had all seen Meet The Fockers, Spider-Man 2, and 50 First Dates. Rock’s point was well taken – the general movie-going public doesn’t want thought-provoking, emotionally-stimulating cinematic triumphs, they just want to be entertained. There’s nothing that a frat-boy with a fart-joke can’t cure.

So as the summer blockbusters of this year are dying down, and the studios begin their lobbying campaigns for next years’ Oscars, I decided to preemptively conduct my own survey. A microphone substituted for a pen and a pad, I asked around to see if movie-going audiences in 2009 were more compelled by substance than absurdity.

Using mass-emails, my local pub, work colleagues and random acquaintances as my research grounds, I interviewed a total of 47 people. At first I was pleasantly surprised by how many people had paid the price of admission for UP. In fact, several people had seen it twice. The same goes for The Hurt Locker andWhatever Works, each of which garnered high marks percentage-wise. But did their numbers in any way compare to X-Men: Wolverine? Nope. What about in comparison to Paul Blart Mall Cop, GI Joe, The Fast & The Furious, or Transformers: Revenge of the Fallen? Negatory. Had more people seen The Soloist than, say, the sequel to Night at the Museum? Too much to hope for, I guess.

Glancing over the numbers now, none of my interviewees even saw Two Lovers, In The Loop or Crossing Over. This doesn’t bode well for the elevation and progression of carefully crafted and emotionally-stirring films. This is not a bitter critique of the audiences, mind you. There is something greater at work here. Ever notice how the trailers of some films end with the message, “in select theatres only.” Or perhaps how the commercial breaks for Desperate Housewives or Lost are an endless parade of plugs for The Hangover? Not all films are treated equally, and the ones that are guaranteed Blockbusters are given greater attention and care than the films that are cathartically-potent. This is a problem that rests on the shoulders of the distribution and promotional departments of the production companies. Great films like The Girlfriend Experience,Empties or The Cove received little attention nationally or internationally, even though they all amassed top honours at film festivals like Sundance, HotDocs, and The Toronto International Film Festival. Were they screened nationwide, instead of in select cinemas? Were they blessed with solid publicity (which rotates press, radio and television) that generated word-of-mouth? How can the general public be expected to support and experience the films that change their lives if they’re not given access to them?

Oscar night parties are notorious amongst movie-buffs across the land. People will gather in front of their television, popcorn and betting-chips aplenty to cheer and jeer the winners and losers of the most celebrated night in entertainment. But with this data in hand, hardly anyone this year will be rooting. Having seen none of the nominated films, they’ll most likely be sitting there with curious looks on their faces.

With the film industry whining about the crippling effects of file sharing and illegal downloading, a real need for revamping their system is in order. Because the fact that I can predict with utmost certainty that the box office returns for The Lovely Bones or The Time Travelers Wife will pale in comparison toTerminator Salvation or Watchmen isn’t just sad. It’s a tragedy of cinematic proportions.