Sang-il Lee’s Unforgiven (Yurusarezaru mono, 2013) bears many similarities with Clint Eastwood’s eponymous masterpiece from 1992. The storyline and narrative details as well as the characters and the frontier setting of Lee’s remake parallel Eastwood’s Western. This also applies to the insistence on shadows and half-shadows in the interior shots and the symbolic use of meteorological events and conditions. But while the American film starts and ends with torrential rain, the Japanese film is set in a wintry landscape. Snow is present in Eastwood’s film, but in only one scene. Lee’s film is set on the island of Hokkaido in the far north of the Japanese archipelago, which makes wintry scenes a suitable setting, and the snowy landscape framed in breathtaking shots heightens the film’s reflections on violence and the human condition.

In the opening sequence a group of riders, members of the imperial forces, are pursuing a fugitive in the wide-open and snow-covered spaces of Hokkaido. In Japanese culture, the colour white is associated with both purity and death, and the presence of the riders and the tracks in the snow reveal that nature is no longer virgin territory but has been soiled by man’s presence and by carnage. Indeed, the first sequence confronts the viewer with death almost immediately when the riders discover the body of a horse. The camera remains fixed on the body of the dead animal for several seconds before it reveals, in another series of shots, the corpses of soldiers killed by the fugitive Jubei (Ken Watanabe), who then slaughters the soldiers who have survived. His long and unkempt hair, speckled with snow, makes him look like the beast that the voiceover refers to, explaining that “any animal will avoid a fight” and adding: “But anyone, man or beast, who thinks he is facing death, will fight like a demon.” At that moment, the protagonist’s face indeed looks demonic, as if possessed by a mixture of despair and lust for blood. 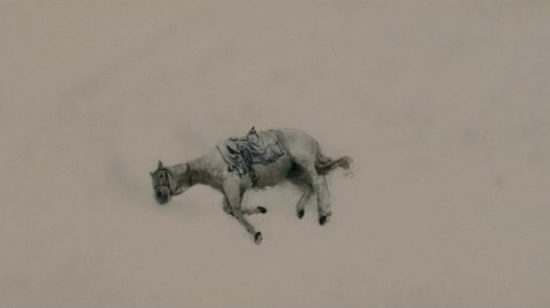 The internationally acclaimed actor Ken Watanabe plays Jubei, the former samurai, who, just like William Munny in Eastwood’s Western, becomes a bounty hunter. And just like the character played by Eastwood, Jubei is nursed by the prostitute whose disfigurement he and his two friends came to avenge. The dialogue between Jubei and the prostitute Natsume (Shioli Kutsuna) takes place, just like in the American film, in a snowy landscape in front of a shack. But while Munny remarks that he had never appreciated the landscape before his narrow escape from death, Jubei seems surprised that after facing death, he is now sitting peacefully in such a beautiful landscape and eating rice balls. His connection with death is expressed by Natsume, who says that he looks “like a man who would die with the weight of his sins on his back.” Munny discusses sexual intercourse with the prostitute, but Jubei reveals his inner torment, worrying about the endless killings but also remembering his wife, who had taught him a different way of life. 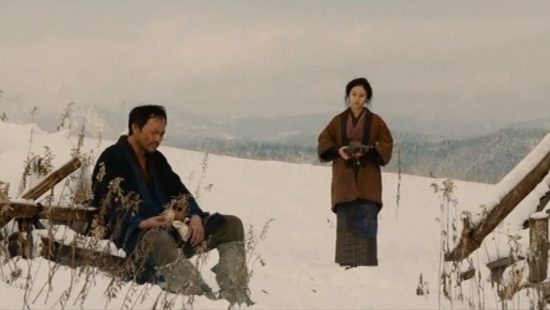 Another sequence set in the snowy landscape is also concerned with death. Goro (Yuya Yagira), the young wannabe killer, is devastated by his murderous deed and confesses that it was his first killing. The two men are joined by Natsume, who informs them that their friend Kingo (Akira Emoto) has been beaten to death. In these two sequences, the human figures are framed in medium or long-distance shots with the wide expanse of the landscape emphasizing their loneliness. The wintry landscape is beautiful but also dangerous and hostile to human beings, who must fight the cold and the snow-covered wasteland. 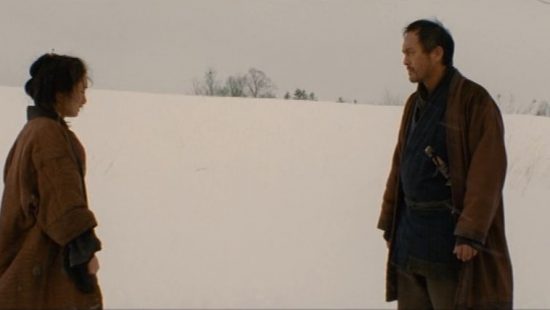 In the film’s first sequence, the fleeing samurai is almost starving, and a feeling of emptiness emanates from the white landscape. Snow imbues the whole film with a feeling of fragility, which is also that of a world in transition. The opening suggests historical change, as it takes place in 1869, one year after the end of the samurai rule and the beginning of a new era marked by Japan’s ruthless attempt to compete with the Western powers in technology. Jubei is one of those samurai who, unwilling to adapt to the new conditions, has fled to Hokkaido, that part of Japan which was for a long time neglected by the central government in Edo (Tokyo).

The rest of Lee’s Unforgiven is set in 1880, at a time when the colonization of the northern island had already begun. The indigenous people of Hokkaido, the Ainu, represented otherness during this colonization in the second part of the nineteenth century. In the film, they stand in the way of progress, playing the role of the Native Americans in frontier America. The conflict between two different cultures is a central topic of Lee’s film, which reveals the racist policy behind the forced assimilation of the Ainu by the Japanese from the mainland and establishes links to discrimination in Japan’s more recent history and present – for example of Japanese people of Korean descent, a group that the filmmaker himself belongs to. This rooting in history and the way Lee reflects on humanity contribute to the film’s originality. Snow adds a strange beauty to this violent tale and provides a strong visual comment on the transient nature of life.

Violence is at the core of the film, which multiplies scenes of aggression and brutal killings. Not unlike Munny, Jubei is unable to escape from his life as a killer. Revolted by the murder of his friend Kingo, he is once again possessed by the demon, whereas the young braggart Goro, disgusted after his first murder, declares: “I’ll never be like you. And I don’t want to.” After eliminating his enemies, Eastwood’s Munny rides out of town, meaner and more menacing than ever. Jubei is obviously hurt – both physically and emotionally – during the long fight. Before going back to Washiro to take his revenge, he made sure that Goro and Natsume would take care of his children. The penultimate sequence shows Natsume, Goro and the two children at Jubei’s farm. 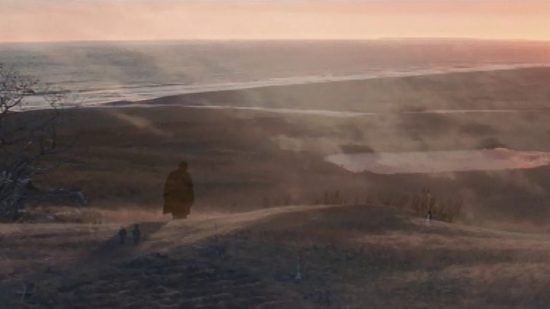 It is the idea of a home, bringing hope even if happiness is obviously fragile and anything but perfect, which resonates at the end of the film. The fragility of hope is expressed by the final shots, which show Jubei, walking painfully and alone in the snow while Natsume on the voiceover hopes that one day he will come back. Eastwood’s Munny is a dark hero, and this is supported by the actor’s screen persona. Jubei, by contrast, is the loser in history who is presented as a threat to the ruling system. He is a human being suffering in his constant struggle with his inner demons, left to his own devices and in a hostile environment. However, his ultimate sacrifice suggested at the end of the film gives Goro and Natsume a reason to live.